Today we’re happy to announce that the fourth, largest-to-date Early Access update for Guntastic is now available on Steam! This update has been a long time coming and includes several features that we hope will help spark new interest in the game as we approach the final release on PC and Xbox.

One of the main issues with Guntastic was that it didn’t offer a single player mode. Since the game has unfortunately failed to attract a large online player base so far, this resulted in a lot of people being unable to play the game at all. To fix this issue we’re now introducing A.I. opponents.

Bots can fill-up vacant slots in both local and online games and offer four difficulty levels: Easy, Normal, Hard and Ludicrous. This feature is still a work-in-progress and we’re looking for feedback, just beware when playing at Ludicrous level as bots tend to become extremely cunning. ☠

Make sure to tune in on Steam or on our brand new Twitch channel as we’ll be streaming CPU-only gameplay that we’ll be using to fine tune AI design and behavior in the future.

Another problem that arises from having a small online player base is that finding a match can take way too much time. While this will always be an issue to a certain degree, we identified several flaws in the way we designed public matchmaking for Guntastic that made the problem sensibly worse:

In this version we introduced a handful of new features that should streamline the online multiplayer experience: from finding a game, to the lobby, to the game itself. When opening the Play Online section of the menu you’ll now be welcomed by a redesigned interface:

Here you can select a game to join directly, or ask the system to find the best one for you (just like it was already possible). In-progress games can now be joined as well, or you can explicitly decide to create a new one.

The lobby itself was updated to let you move back and forth between the character and level selection screens as you wish, reducing the number of steps required to start the game. Game Rules can now be customized in public multiplayer sessions and new rules are available to control CPU players and player count. Finally, the new player menu provides access to additional player information and moderation actions (kick). 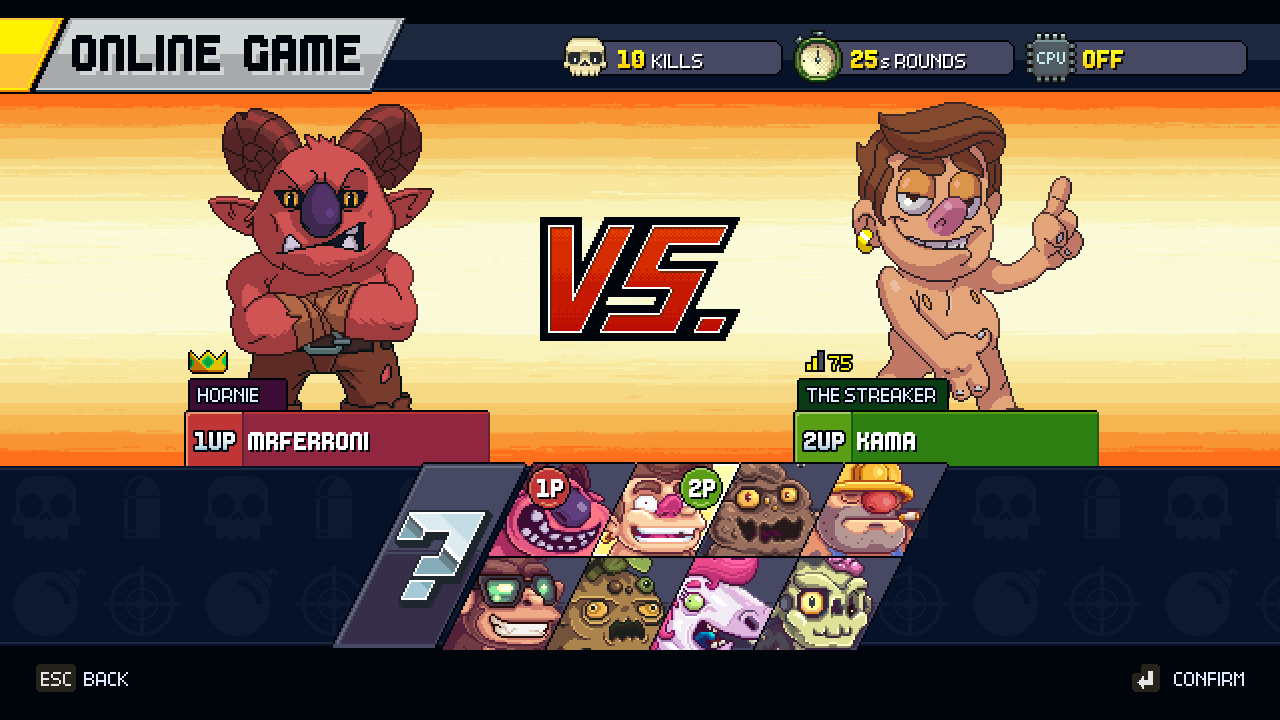 Ruthless 1 vs. 1 competitions are now possible.

Due to some specific Xbox requirements we had rethink the overall design of the scoreboard screen. The new version should be much cleaner to read and also provides a quick way to find out more about your opponents and eventually add them as friends for future games.

That’s it for now! We hope you enjoy the new features. As always we look forward to hear your feedback here or on Discord!