I just released a new update (v.0.1.8.60). This version refactors some code and introduces a new object, which I am very excited about: The Alchemy Bar.

The alchemy bar allows you to brew potions that your creatures can use when they are about to crap out. For now, you can make 3 kinds of potions - Health, Mana, and Stamina.
And to make highly magical potions you need to gather some tools and ingredients. First, you need glass flasks to bottle up the potions, second you need water to mix the dry ingredients and then you need mushrooms that provide the power to one of the three benefits. Glass flasks are made in the furnace. You can now add sand to the furnace which will produce the flasks in a 1 to 1 ratio. Once everything is combined it begins making the potions. The following screenshot shows the three potions (health, mana, stamina) and some empty glass flasks:

Select the Alchemy bar on the map to bring up the brewing window (lower left in the following screenshot). There you can see what ingredients you have already supplied and you can select the potions that have been brewed to transfer them some place else. 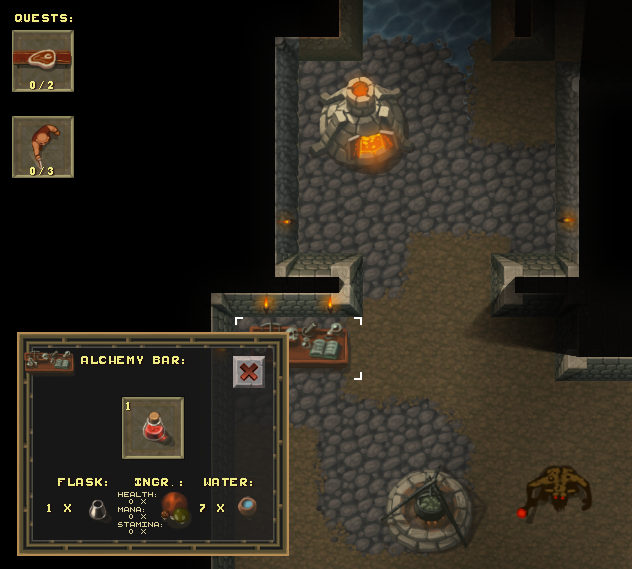 There is also new logic that goes along with the potions: Select one of your creatures and directly click on the potion icon next to the status bar in order to command the creature to drink a potion... 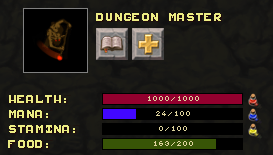 ... if the creature has one in the inventory then it will be consumed immediately. Otherwise, the creature will go to find one in any container where you stored them. You can add them to your creatures inventory and use the lock button to lock them into place for when they may need them. That is, if in battle and health is too low, creatures will drink a health potion if they have one.

It's probably a good idea to store them in chests in areas where you can expect high enemy traffic. However, enemies are very eager to find potions and will steal them from you.

Though, I gotta say, I think i created more bugs than I fixed. So this version could be a bit buggy :-p. Plus there are many many small details that I want to fix/add, you may realize that while playing.

Please leave some feedback... till next time