Full steam ahead! Dog Days is now available on all of its intended platforms (iOS, Android and Web)! Check out our blog to gain insight into the development of Dog Days by checking out our Post Mortem. We hope this Post Mortem will help other indie devs avoid the pitfalls we slipped into and capitalize on our successes. Happy reading!

Background
It has been just about two months since ‘Dog Days’ was released and we wanted to take a few minutes to reflect on the development and release of our game before diving into our next project. ‘Dog Days’ was the first title that our organization, Broken Knight Games, created. We hope this post can be used be other new entrants to the indie developing market so that they can see what worked for us and what did not. 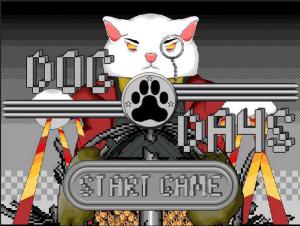 Broken Knight Games was founded with the mantra that we are creating games for the masses; games that are meant to be consumed by everyone. The vision of ‘Dog Days’ was to be a casual side-scrolling adventure game, a game that someone could pick up and play in 3-5 minute increments. We found out early that the minority of our target audience pays attention to the story in games, they just want to get straight to the action and reward structure. Our ambitions of a robust story boiled down to the simple concept of a dog name Apollo advancing though different areas of the world in order to defeat the minions of C.A.T. Corp and their relentless CEO, Count Basset. Apollo flew though each level firing his ‘barks’ at the large array of enemies with the goal of avoiding projectiles and making it to the end of each level. Each level was splashed with hundreds of coins that Apollo could pick up and spend in the game’s Armory which featured upgraded ‘barks’, ‘suits’ (armor) and power-ups (health/firing upgrades). Monetization of the game relied solely on a player purchasing coin packs to speed up their procurement in the ‘barks’ and ‘suits’.

The development process of ‘Dog Days’ took about ten months (it was a part-time project for all four members of our company). When the game was finally released it made appearance on Google Play, The App Store, GameJolt.com and Kongregate.com (all of which it is still available on today). In the following sections we will discuss what we did during this whole experience, what we felt went right, what went wrong and how we learned the whole way though.

Tools
The tools a worker chooses will define how easy or difficult a job will be and one bad tool can make or break a job. Overall our group was very happy with the tools that we choose. We acquired Unity 3D to be used as our game engine and never looked back. In terms of engines to develop our game, we could not have asked for a simpler and more efficient program to use. One of our programmers was already well versed in C# and it did not take long for our game designer to learn the language and start using Unity to sow the art and game mechanics together. The only complaint with using Unity was that we initially paid $400 for the software license (which was well worth it at the time), however just a month after we made our purchase the developers of Unity released a completely free version of the engine. We were extremely disappointed that our timing cost us a considerable amount of our budget, but at the end of the day there was nothing we could do.

Where our tool choice took a turn for the worse was when we decided to use Othello. Othello is a free tool that we found that manages all the game objects onscreen (sprites, animations, backgrounds, etc). During the initial build of the game no difficulties showed their face. But, when it came time to take the alpha version of the game and start making improvements and changes to the game objects is when we noticed everything fell apart. For each change we needed to create a new game object and re-sow all of the objects together. With dozens of enemies, hundreds of coins, backgrounds and Apollo this was a grueling, time-consuming task. We choose to continue using Othello despite this. Ultimately, this issue was the cornerstone that produced all of the imperfections in ‘Dog Days’. So, every time we tried to return to the game to change our coding or alter art elements (even the smallest tweak) would cause the bugs to appear game due to the high probability of error when creating the game object with Othello. The issues are consistent no matter what we try to change and how careful we are. The worst result was it has inhibited us from making any updates to ‘Dog Days’ since its release. Any change would not be worth the effort that we would have to put forth. Othello is the duct tape that is holding our roof together. Since publishing ‘Dog Days’ we have found a program called ‘2D Toolkit’ which looks like a promising replacement for Othello with none of the headache.

In order to create the animation for our bosses we choose Spine. It didn’t take long for our artist to learn how Spine worked and for him to tie in the assets needed to make our bosses come alive. One qualm, if any, was understanding space within Spine. It was hard to properly animate distances. For instance if we needed something to move from one end to the other and then back was a trial and error ordeal. We will definitely use this again if another game requires it because of its ease of use and seamless tie into Unity.

Finally, Trello was our choice for project management and task scheduling. I don’t remember where we heard of it, but it was the most incredible tool to keep track of our project’s progress and to organize what was completed and what needed to be finished with the game. Trello is web-based and has an app for all major mobile devices, so you can check it and update it whenever you complete a task or think of a new idea. I would honestly say that you could project-manage your life with this app if you needed to. Oh, and it’s free!

Marketing
Our marketing effort mainly followed the following three brute force tactics. Post on game/indie development forums about the games progress, email review sites and hope that they review our game, and promote the game via social networks. Our forum efforts probably got the best response out of the two. We mainly relied on posting on reddit and a few other gaming sites. Our posts generally contained the progress that we made over the week coupled with screen shots from development or artwork that we were working on. The responses to these posts were generic words of praise, but not elated enthusiasm, which was seen with similar posts from other studios. In the future we hope to develop more of a report` within these communities by posting and engaging more with our peers in order to help boost awareness about our own efforts.

Every port-mortem that you read will say how so much of the marketing effort lies around the pre-release of an app. Due to delays getting an Apple Developer Account we decided to do a soft launch of ‘Dog Days’ on Android to see how it performed. With only a few forum posts announcing the release we allowed Google Play to put our game in the market. Downloads started slow and never picked up. Two weeks later we got the green light from Apple, but at this point in time we were excited and anxious for the release that we only gave ourselves a week to do all of our Apple pre-release marketing. This is we started reaching out to 50+ review sites giving them early release promo codes, building up how great the game is and soliciting their reviews. During that week we were only able to email about half of these sites. We have yet to receive any response nor a review. In the future we will focus on a unified release on all platforms and an ample amount of pre-release time to more effectively market our game.
To continue reading about our Audio, Marketing, Monitization and to see our Analytics please see our website. Cheers!

The one nice marketing success we had was getting featured as “Indie Game of the Week” by corresponding by a review site editor via twitter. Due to the low traffic on the site the title did not garish many extra installs. Another positive for our marketing effort was we received a promo code for Facebook advertising. With this promo code we were able to reach out to ~34k Facebook users and about 200 of them downloaded ‘Dog Days’! 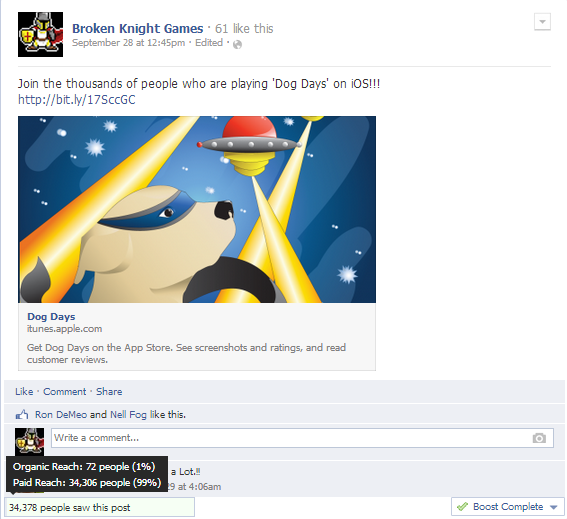 During the game development process we were diligent about posting our major mile stones to indiedb.com. Indiedb is a site that showcases a page for all indie game titles. Below is the analytics from Dog Days’ page views on indiedb. We saw major spikes in our audience viewership right after we posted about the game releases and when we would share screenshots and promotional videos. Indiedb is definitely a site we will continue to use because of the volume of exposure it generated.

Prior to our release we decided to invest in ‘Dog Days’ business cards. The cards had artwork from the game and featured a promo code to use within the game to get free coins. We ordered the cards from Vista Print and were very satisfied with their price and customer service. The cards were primarily handed out at a small launch party we had in Williamsburg, Brooklyn. The party and the cards were moderately successful, but a stack of cards is still sitting on my desk at home and I doubt they will all ever be passed out. Unfortunately, this was the one and only time we utilized our in-app promo code system. In future games the in-app promo system should be utilized heavily in our marketing effort.
Finally, we produced two Youtube promotional videos that we included in many of our forum posts and featured on our website. The videos netted 200+ views and maintained pretty solid retention rates according to Youtube analytics.

Wrap Up
In our eyes ‘Dog Days’ was a major success. Although our whole process was riddled with an improper toolset and soft marketing efforts, we have learned a tremendous amount about the whole game development process which could have only been learned by trial and error. We are hot on our heels working on our next project which promises to take the lessons that we learned and incorporate that with our passion to produce quality games for everyone. To check out our upcoming games and read a more in-detailed post mortem for 'Dog Days' please visit our website.

Well done guys! 5 stars for the effort and sharing your marketing experience with us. Can I ask when did you start marketing your game in the whole process?

Hi Cobagames, thanks for reading the post mortem. To answer your question, we started the marketing probably six weeks before the actual release of the game. We realized this was definitely too late and we were able to build up a solid fan base in the indie community in just a short amount of time. If we did start earlier I would imagine our launch numbers would have been greater.