Learn more about the World Map, Phases, and Deeds! 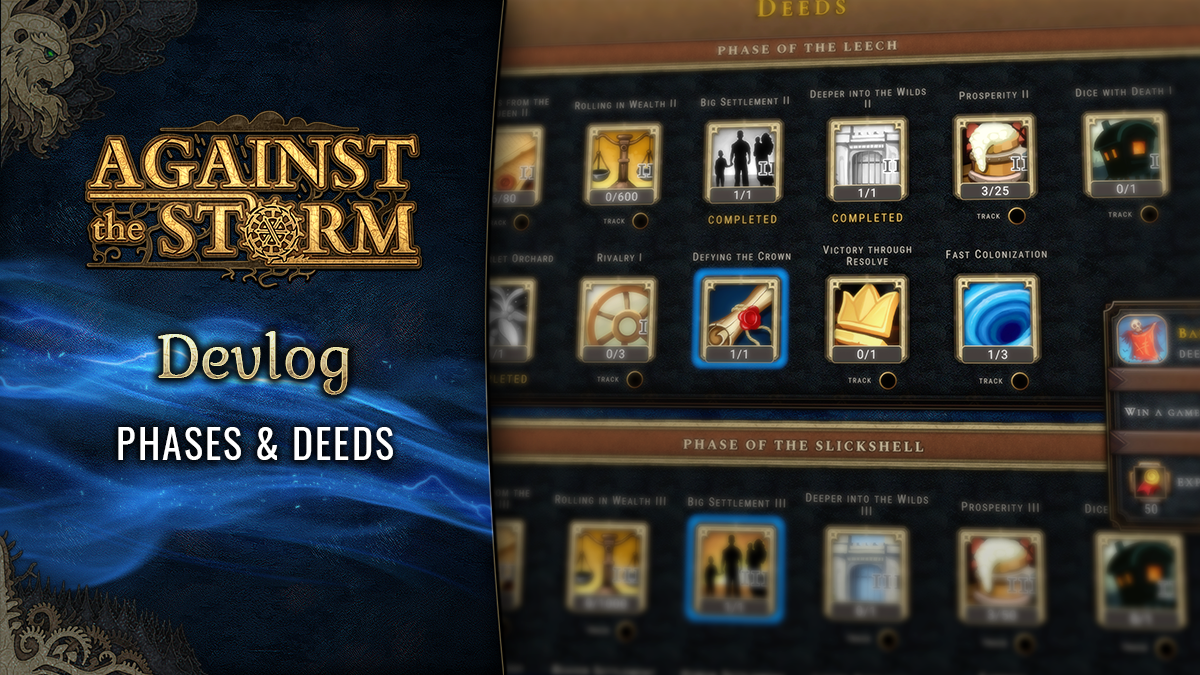 In one of our previous devlogs, we talked about how the meta systems in Against the Storm work - choosing a place to settle on the World Map, differences between biomes, buying upgrades in the Smoldering City, etc. A lot has changed since then, so now’s the perfect time to cover all the new additions and explain in detail how the system will work in the Early Access release version that’s coming out in just a few days, on the 18th of October!

Let’s start with what hasn’t changed - there’s still a World Map divided into hexagonal fields. You choose a tile each time you start a new settlement, and that determines the biome you will play on, the active modifiers that will influence your gameplay, the difficulty level of a given map, and the different seasonal effects you will encounter. The further away from the center of the map, the more demanding the game will become. 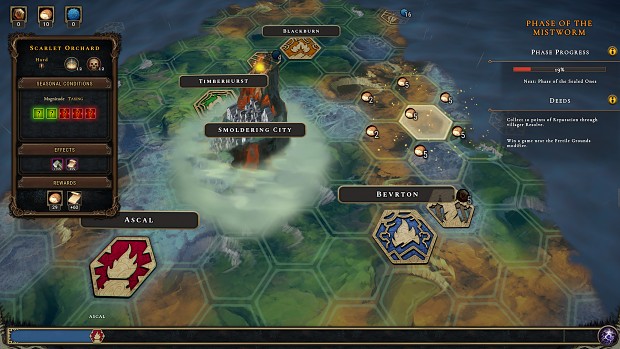 No matter how many successful settlements you build or how far on the World Map you venture - the Blightstorm will always inevitably come and erase everything. The only safe haven is the Smoldering City - a HUB where you can spend your hard-earned riches resources on new building blueprints, perks, traders and more.

Although harsh, the Cycle has a clear purpose in Against the Storm - it limits the number of settlements you can build (and trade with) and shuffles the map around every few in-game years.

The biggest new addition to the Early Access version is the Obsidian Archive - a magnificent structure in the Smoldering City, where records of the greatest Viceroys in the Kingdom are kept. Unlocking this upgrade will give you access to a whole new system - the so-called Deeds.

Deeds are special challenges you can complete when playing the game. They can range from simply establishing a settlement on a specific tile to finishing a game with 4 active Dangerous Glade Events. Some Deeds can be completed at your own pace, others are time limited - like for example discovering 20 Dangerous Glades in a single Cycle. By accomplishing Deeds you earn extra experience points and unlock decorations for your future settlements. You also progress the entire game’s world through unlocking new World Phases. 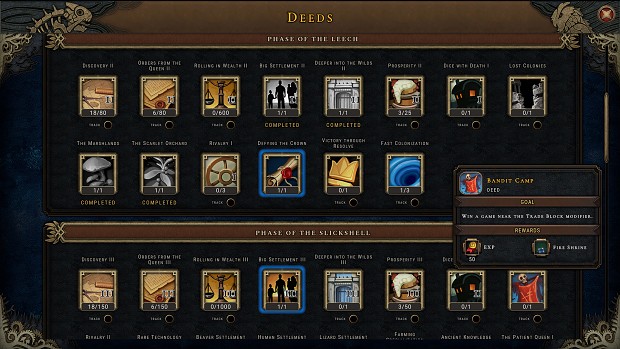 Phases can simply be described as levels of the World Map. Each Phase has its own set of rules on how the map is generated (biome layouts, modifiers, difficulty distribution) and a list of Deeds. To progress to another Phase, you must complete enough Deeds from the said list (around 50-80%). You can always complete Deeds from other Phases (lower or higher), but only the ones tied to your current Phase will be counted towards its progress.

You begin your adventure in Against the Storm in the Phase of the Moth, where difficult tiles are placed further away from the Citadel, and not too many modifiers are spawned around your starting location. After you complete 6 of the 11 Deeds in this Phase you will advance to the Phase of the Leech, which will be active after the current Cycle ends. In the Phase of the Moth a new modifier type and a faction will start spawning on the World Map, and biomes other than the Royal Woodlands will start appearing at your starting location. More difficult tiles will also be placed a few fields closer to the Smoldering City. This way, as you get better at the game, you slowly up the difficulty and experience new ways of playing.

Against the Storm is coming in just a couple of days!

Dust off your raincoat and prepare to build cities in the unknown wilds. The Scorched Queen needs you!

Pre-purchase and save 10%:
Epicgames.com