Citizens! We’re back with the new Devlog which sums up everything that’s been going on lately and takes a deep dive into a new World Map feature. Also, take a sneak peek into upcoming devlogs. 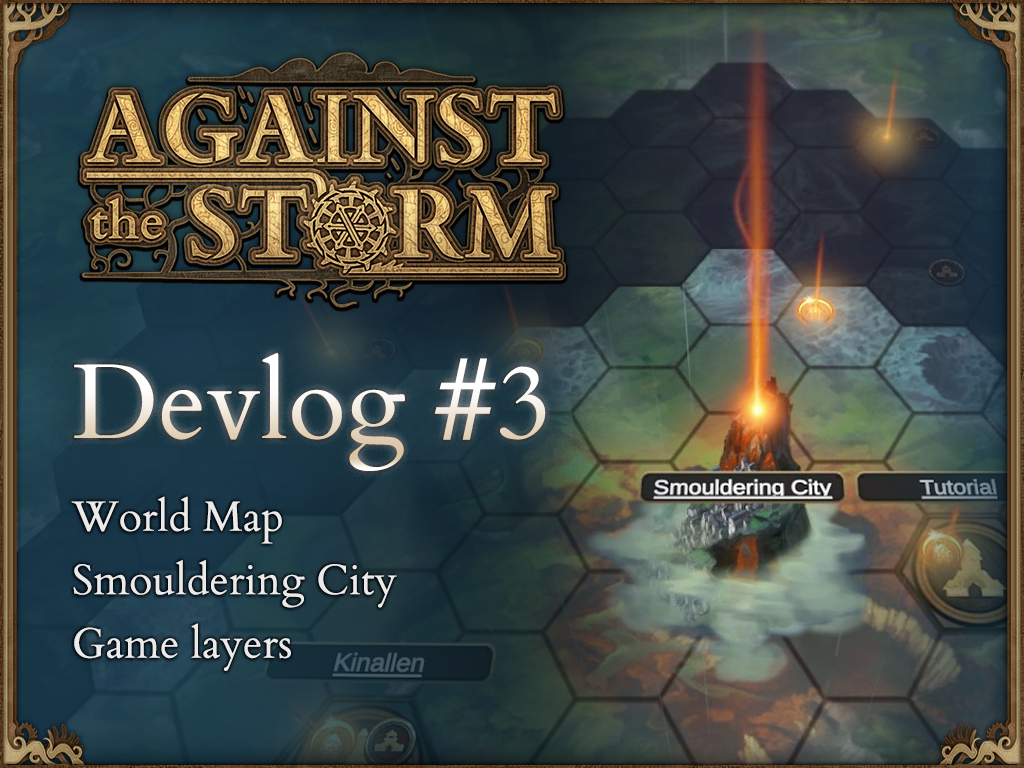 It’s been a while since the last Devlog (“or any new screenshot!” - the crowd says), but there’s been a lot going on lately.

There are a lot of topics to cover, so we decided to break them down into three Devlogs. Enjoy the first part!

IMPORTANT: Everything you’re about to see and read is a work in progress art and design. It consists of some “Developer art” or early ideas and does not represent the final quality of the game.

The main reason why we went under the radar lately is that we are focused on finding funding for Against the Storm. For the last year, we’ve been working on the game after hours and we believe it’s finally time to make it our full-time job. It will allow us to significantly speed up the production and stay closer in touch with you.

It’s a time-consuming process and requires a lot of effort from the entire team. While we can’t disclose any details, it’s safe to say we’re on the right track!

Here’s an exemplary slide from our pitch deck which helped us get some attention. Thank you for re-sharing our tweet, it helped a lot!
(Not following us on Twitter yet? You’re just two clicks away: Twitter.com) 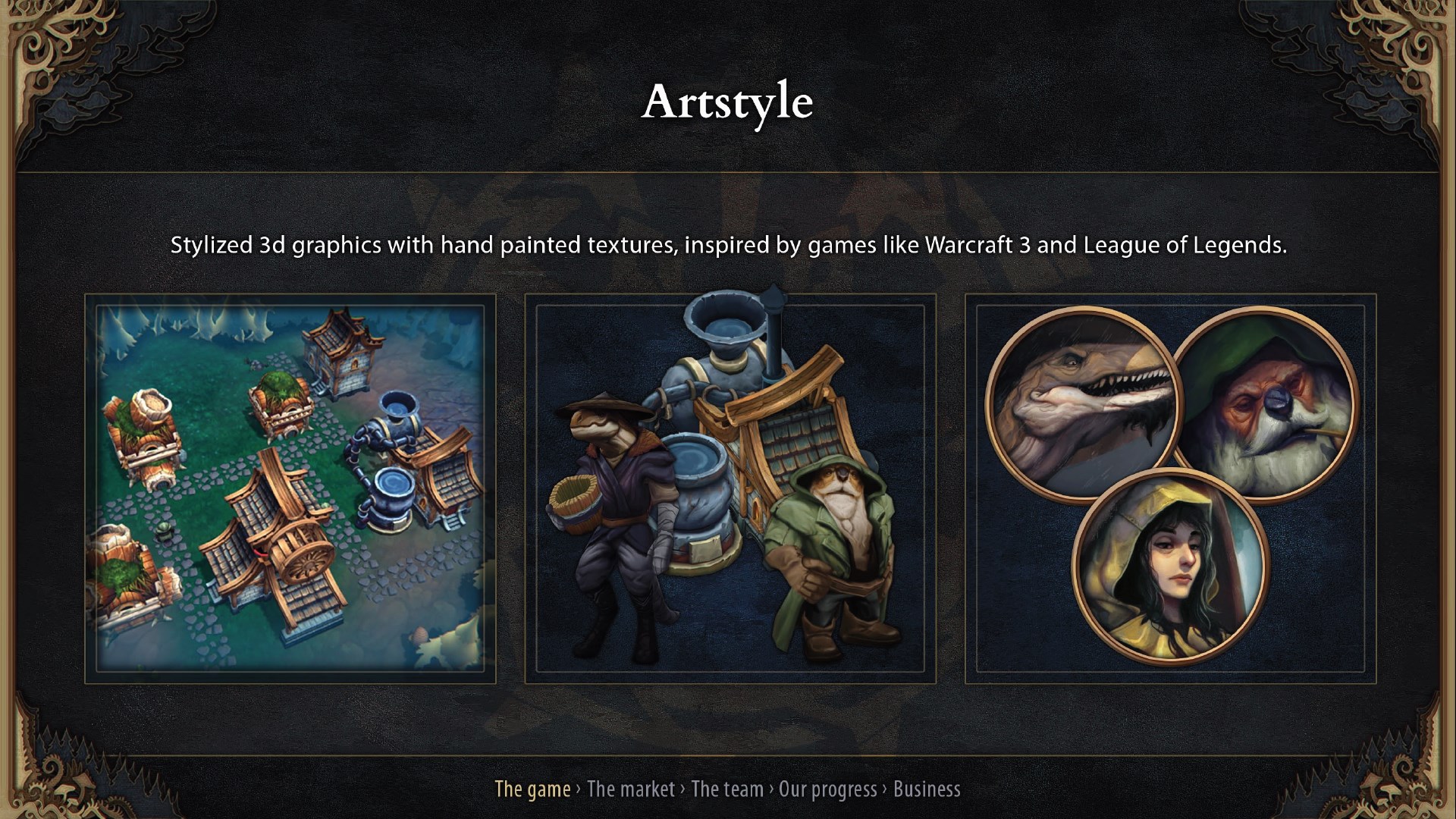 Artstyle section of Against the Storm pitch deck

Keep your fingers crossed for us and await more good news!

In the meantime, we had our hands full with work on the World Map Layer of the game. This is where you’re going to make the decision on where to settle next. 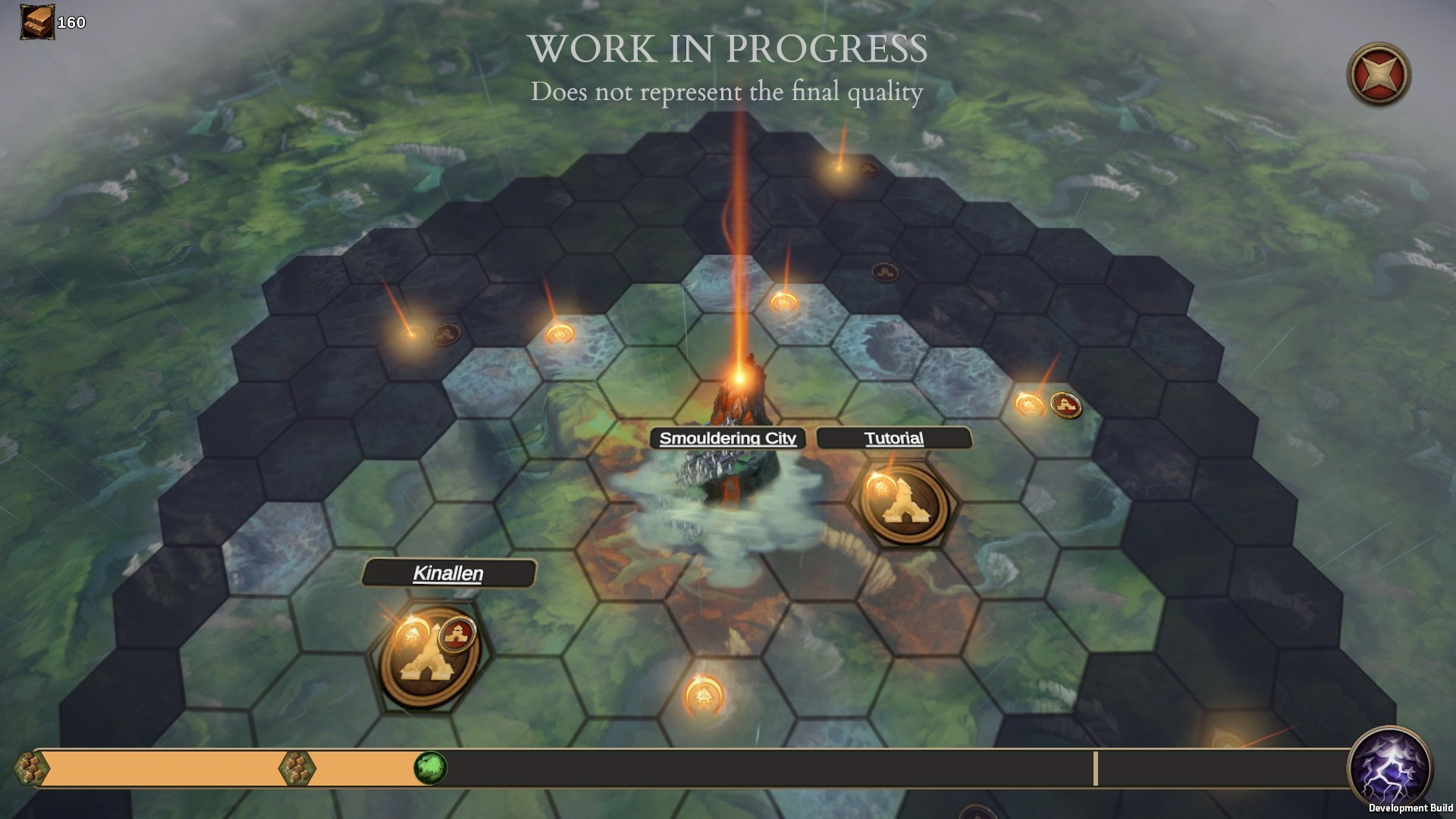 The World Map is made out of hex fields. Each individual field is a potential place for you to start a new settlement. Each hex also belongs to a certain type - a so-called Biome - which defines many starting conditions, resulting in very different playthroughs depending on the initial choice. It was designed to modify the way you approach each game.

At this point, it is important to distinguish two layers of the game:

The map features in the City Builder Layer are generated depending on the biome to which the field belongs. After selecting the hex field on the World Map Layer, a more detailed description will be displayed. It includes: 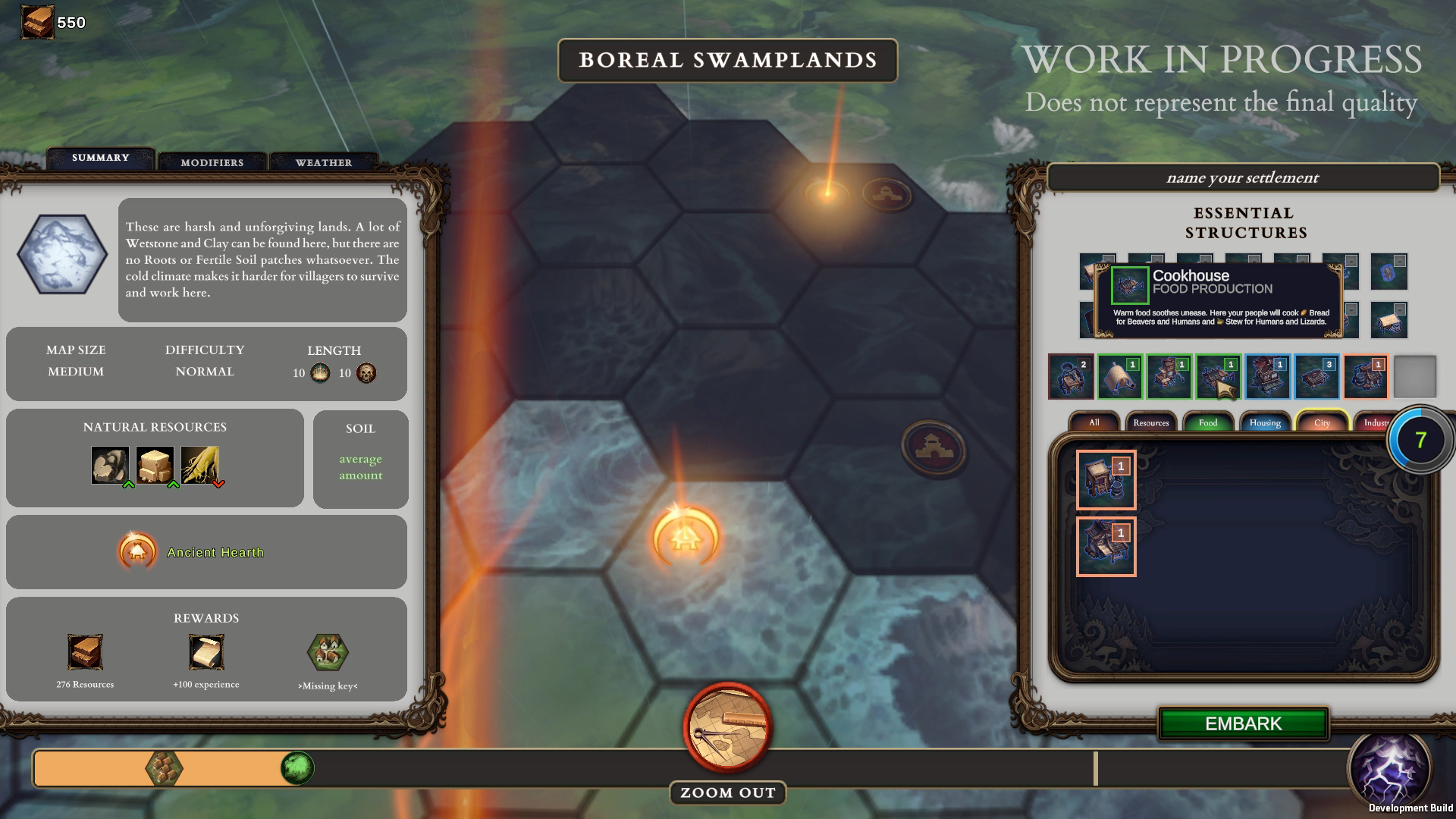 Special modifiers (pawns, which represent additional structures available in the particular game) are placed frequently on the World Map.

Biomes affect the content of the map and the type of terrain. Some specific biome-dependent elements are:

Biomes will primarily differ in terms of the presence of resources, threats, and rewards. Some will have more food, some will have none, and some might have some specific type of resource that is exclusively found there. Some biomes may have very dangerous threats, others none at all, and so on. 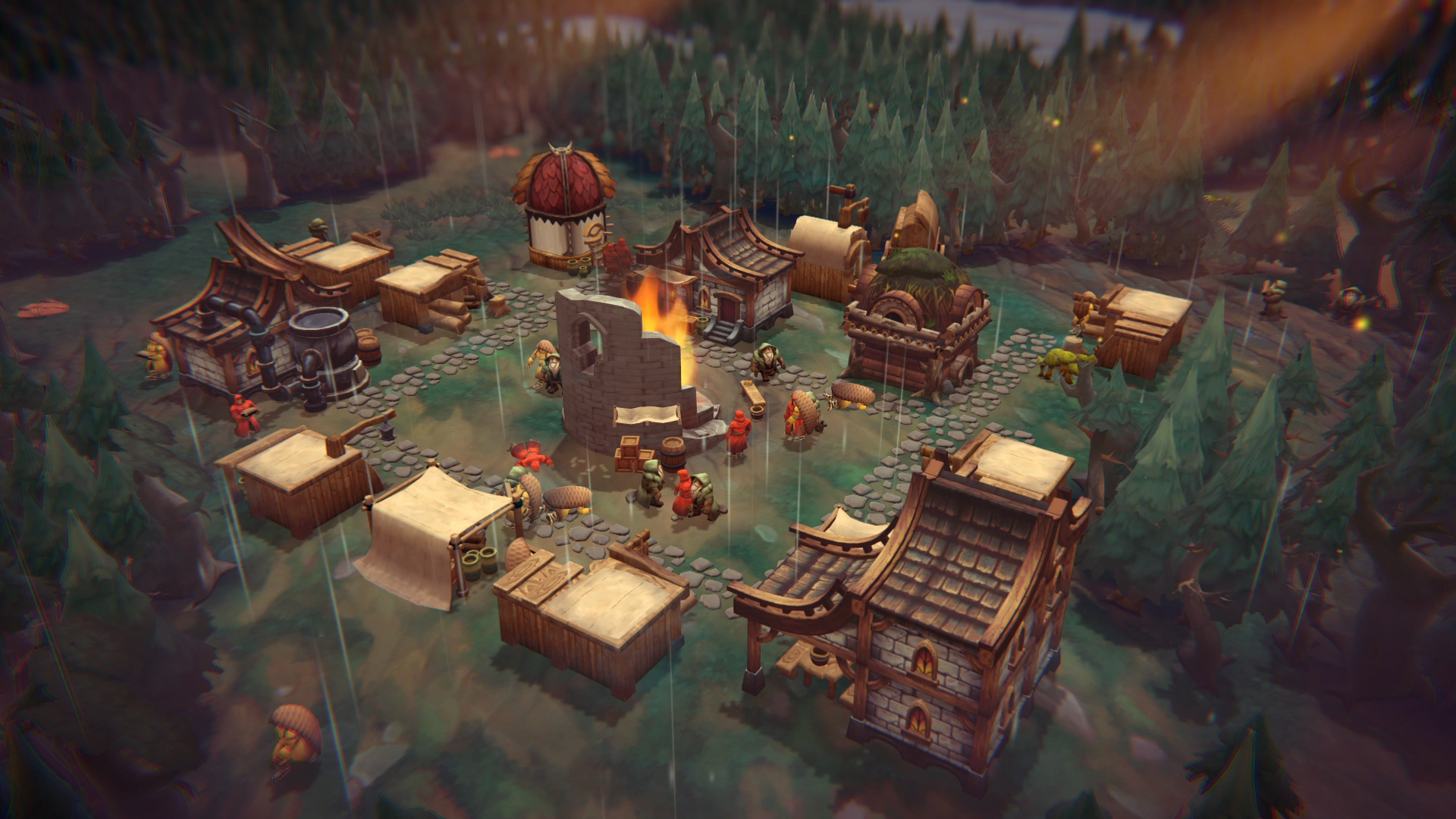 Until now, you were only able to see the basic Royal Woodlands biome. It has a more or less balanced amount of food and resources, a certain amount of fertile land guaranteed, and a lot of trees. Lately, we have also introduced a new mushroom biome on which we’ll shed more light in the next devlog.

We interrupt this broadcast to remind you, that if you want to stay up to date with everything Against the Storm (and support us) you can follow the game on Steam and add it to your wishlist

The Citadel (aka the Capital or the Smouldering City) is located in the center of the World Map. It occupies 7 hex fields - the central hex and 6 hexes around it. 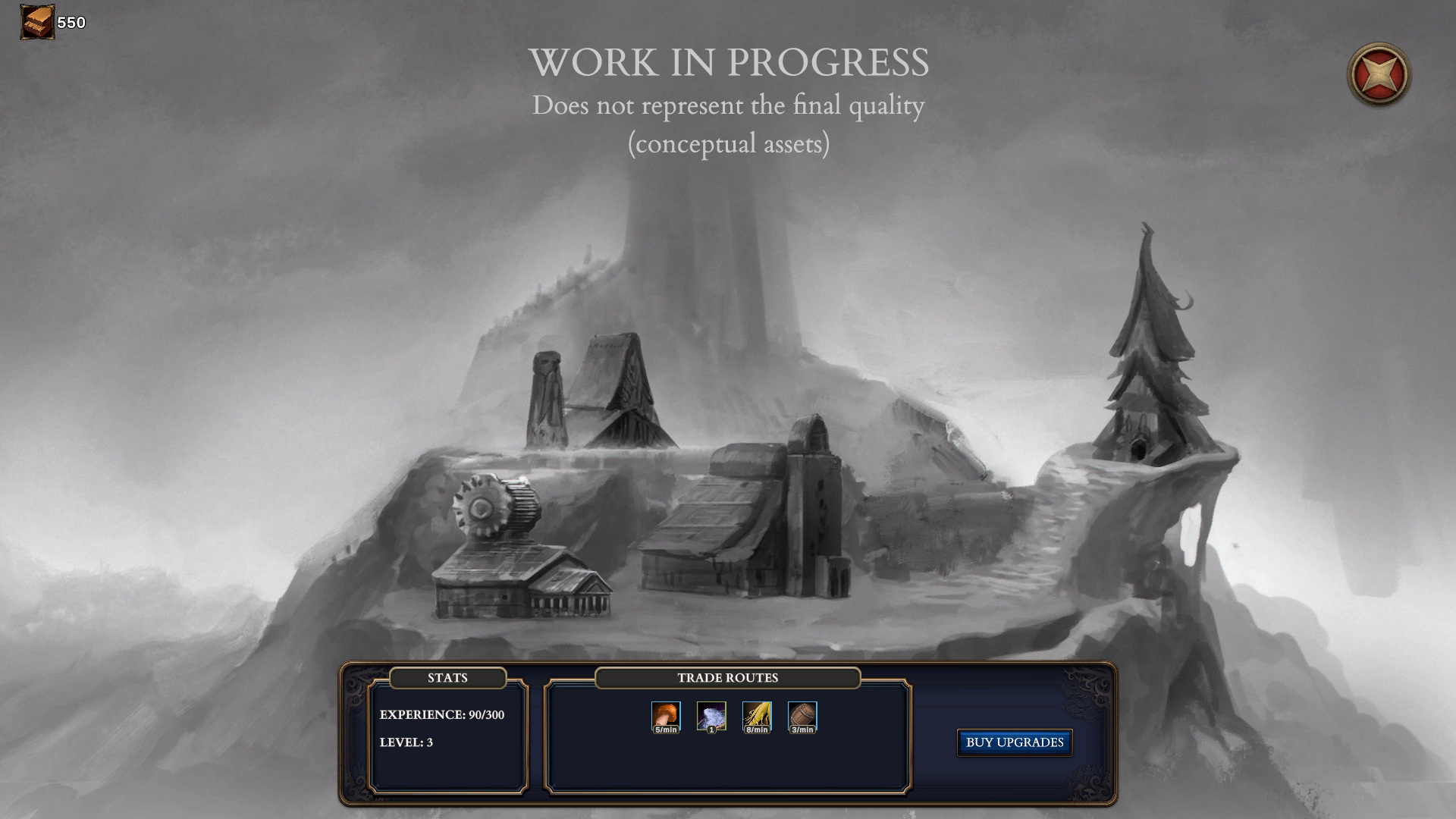 In the Citadel, you can buy Upgrades, which grant you various bonuses. Upgrades are never lost between games and are not mutually exclusive.

From the beginning, the world has been regularly haunted by the Great Storm. The only mainstay for the surrounding lands is the Citadel (the Smouldering City). The eternal fire burning on the top of the mountain around which the Citadel is built seems to ensure safety, but the rains are merciless to everything outside its protection. Every few years, citizens go out into the world to explore lands, build settlements, and acquire supplies.

Occasionally, remains from the previous Storms can be found: road debris, destroyed buildings, or the remains of an unlucky caravan that did not reach the shelter on time.

But there always comes a time when the raindrops get heavier and the air starts to smell too light, and each of the Scorched Queen's subjects must return to seek shelter from the impending destruction.

The Capital (or the Citadel) is a form of an avatar of progress. You will invest in it and develop it between runs, leaving a permanent mark on the World Map. We will cover the meta progression in the next Devlog, so make sure to check our Steam page from time to time. You can follow the game to stay up to date.

Time for your feedback

Did you enjoy this issue of Against the Storm Devlog? Let us know what you think of the new features! Also, if there are any other topics you’d like us to expand on, let us know in the comments or on our Discord server.

May the storm be gentle on you.
Eremite Games

Devlog #2 - Feedback Summary, Plans, and More!
Watch the gameplays from the demo, discover reactions from the game, and learn how we plan to assess your feedback.

Devlog #1 - It’s alive!
Discover the design ideas behind the Dense Forest system, get to know the Beavers, and learn more about building modules.

Join other villagers on our official channels: