In the second DevLog entry, we explain several of the gameplay mechanics in Cold Steel: Defiance and examine some of the key features of the game.

Ever since the beginning, we have designed this game in an unusual way. As a team, our focus is to create a game which we would like to play. We chose to develop this game as gamers. So, instead of studying charts and market trends, we analyzed the Action-RPG genre with the critical eye of the customer, instead of the financially-oriented eye of the businessman. And very early during the design process, we reached an important conclusion. The most important things in a videogame are immersion, story and a sense of accomplishment. So, the most important question we were faced with, was, how do we accomplish these goals?

In order for a game to achieve the all important three principles, the game's setting, art direction and level design, difficulty level and diversity, and story and character design, must blend together harmoniously, in order to create the most immersive experience possible. In an Action-RPG, elements such as puzzles, exploration, dialogue and combat are the all-important features which determine if the game will have good gameplay, or not.

A good Action-RPG must offer the player a sense of wonder through a unique and detailed setting, which can be explored freely, as well as a challenge and a sense of accomplishment from overcoming that next obstacle, or surviving that next encounter with enemies.

As a result, a huge amount of attention is given to every single detail, in order to stimulate the player's interest, by facing him with complex and challenging puzzles, a dynamic, action-packed, tactical combat system and unique skill and reputation systems.

Demonstration of the firing sound for the SA18 Assault Rifle

In Cold Steel: Defiance, the AI will attempt to outmaneuver you through every means at its disposal. Enemies will work together to create diversions, or lay down covering fire, while their comrades attempt to outflank you. They will use cover and abilities, while also attempting to counteract your own. Another important feature in the combat system, which many games ignore, is bullet penetration. In Cold Steel: Defiance, each weapon will have a preset chance at penetrating cover and actually hitting the player and his party of characters. Therefore, the player will have to rely on more than simply hiding behind cover, to pop out from time to time and shoot at enemies. Players will have to move around the battlefield, coordinating with their NPC party members to achieve tactical superiority. Also, the open world nature of the game, insures that players will always be able to handle any combat situation in a wide variety of ways, making use of weapons, powers, different party combinations and the environment, to get through a combat situation. In Cold Steel: Defiance, simply charging in and spraying bullets, wildly, will prove to be a fatal decision, regardless of the weapons used, or party composition.

Another element which we have changed is the skill system. Unlike other games, where you ramp up experience points until a level-up, after which you proceed to click some buttons in a menu, to upgrade your skills, in Cold Steel: Defiance, we have opted for a more fluid and natural system. That's because very early, we realized one thing: Numbers are bad for immersion. In the real world, you do not gather experience points and you do not press a button to improve a skill. Instead, you learn a skill through two steps: Instruction and practice. Therefore, this is the system which we have devised for Cold Steel: Defiance. In order to learn, say, Assault Rifle Level 2, you must first perfect Level 1 of the same skill, through use. After reaching 100%, you must then find an instructor who is willing to teach you the next level of the skill. If you can afford his or her services, that teacher will instruct you and the process repeats itself. So, instead of clicking on things in a menu, skills are upgraded through dialogue with the correct NPC, once the prerequisites are met. This makes for a far more realistic and immersive skill system. 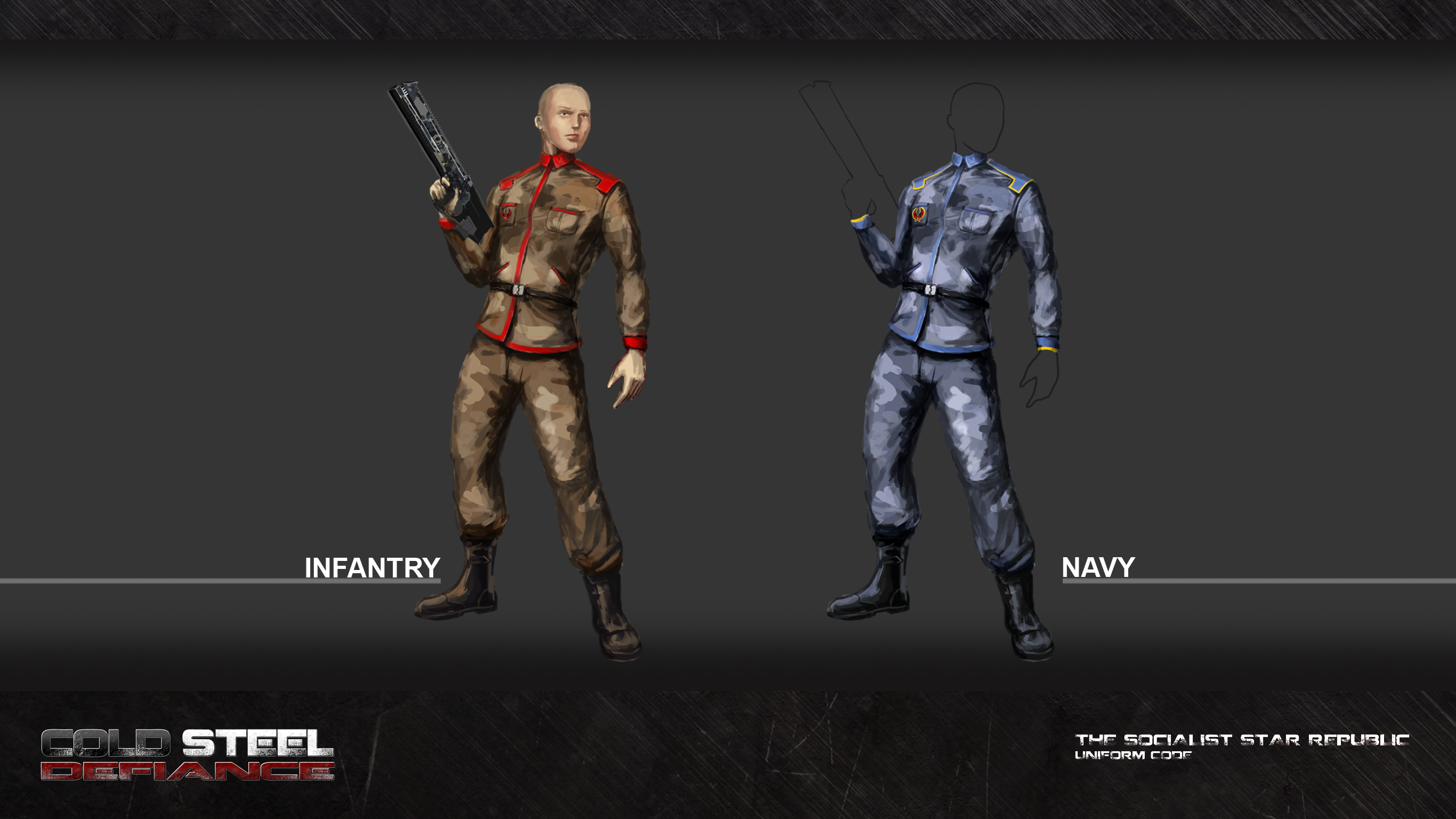 The third gameplay feature we shall look at, in this article, is the reputation system. Unlike other games, we have completely done away with the old light-dark alignment system, replacing it with a far more dynamic and realistic reputation system, which is based on personal goals. In Cold Steel: Defiance, there are four "Personal Goals": Altruism, Power, Wealth and Glory. The style in which you play, as well as the choices you make, determine how the balance sways between the four, affecting how NPCs react to you. This means that each quest can be handled and accomplished in multiple ways. Do you want to be a good person and help the miners defend against the bandits, out of the goodness of your heart, free of charge? Do you take advantage of their desperate situation to extort them of what little they have? Do you ask them to advertise your prowess as a mercenary, in return for your help? Or do you take over the bandit gang and rob them? Choices like these, determine what kind of reputation you have, completely altering the way the game reacts to you, not only increasing the replay value of the game, but making for a more realistic and immersive experience.

This concludes our second DevLog entry. In the next entry, we will be putting the game's setting and art direction under the looking glass, in order to analyze what makes the world of Cold Steel: Defiance, such a unique and unusual setting.