I just wanted to come by and say that everything is rolling smooth on the mod. My road path is set, and it looks beautiful. I also have a FAQ written out explaining allot of things of the mod and my own personal taste and inspiration when it comes to mod development and this custom story.

I just wanted to come by and say that everything is rolling smooth on the mod. I have finally got around to organize my mod, meaning I have categorized the map folders in detail. Example would be ACT 1, sub-folders will be with in that act of story that in each folder would be a specific level. All of the folders goes in order to the story. I did create a road path documentation awhile ago, and now have implemented that document structure into the map folders. In other news, the voice acting lines are all finally written out. I did need to revise the 2nd half of the game majorly, and it was well worth it. Now I am just waiting for the voice actors to do there part, while I do mine and continue to develop the levels and scripting. I am in no rush to get this out, but that does not mean I work vary diligently in every chance I have to work on this. My road path is set, and it looks beautiful.

1. How long is the total duration of voice acting?
A little over 1 hour.

2. How long will it take to play the mod?
I can not say how long it will take. There will be many things to explore, and study with in the story. Im sure it will be over a few hours.

3. How many areas are there to explore?
There will be roughly about 65 total areas to explore in the mod. There is allot of variation of levels. There will be levels that make you afraid and lonely, While in contrast there will be beautiful outdoor environments as well. It is important to note that each area is part of this big elaborate story.

4. When did you start working on the mod?
It is kinda hard to tell precisely when I started working on it. I do remember a good friend of mine mentioned this game to me just a couple of weeks when Amnesia was released on September 8th 2010, so it was around that time when I played Amnesia. What got me exited about it was that you can make your own custom story. So then I thought, "I should make a custom story." I did have a lot to learn, I never relay modded a game before this deep. So I started on my project from so much humble beginnings around September. Ever since that time, the story evolved and evolved, and now after 2 years and about 3 months as of now, I have been working on this, of course I do have a life other than this project but I always think about new ideas that I could implement during the time when im doing other things.

My first map ever in Amnesia when I first test played HPL2. 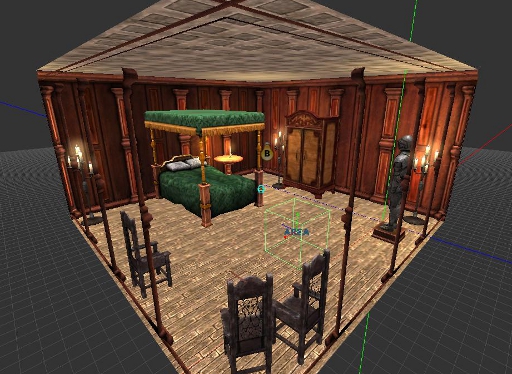 5. Will there be any new monsters?
There will not be any "new" monsters per-say. A large collection of monsters will be from the community that has released for mod developers, I will still include monsters from the original as well. But this is not that kind of custom story where you see a monster every 10 min, no no. I will use monsters vary lightly. I will only use them with in the realm of story when needed. There are more story exploration than monsters, that's not to say it will be scary.

6. Will the mod be scary?
That depends what you are afraid of. It is vary tricky to scare someone. We can only scare someone so many times till they think its a walk in the park. But I do try to implement being scared of the unknown, the fear of being lost, and being claustrophobic. I cant say this will be the scariest game ever, actually it wont in compassion to other titles, but there will be the fear of the unknown to back me up on that.

7. What inspired you to make the story you wanted to make?
I have always been fond of creating story's of my own. Seeing the characters decision's make and looking at the outcome is a unique experience. I have always been curious about that painting "The Hands Resist Him". When I started to create my custom story, I decided to use the painting as one arc of story, I kept mostly everything accurate to a degree to get things rolling with in the story. The characters that play with in the story are fictional expect John Marley. The tale goes that John Marley the Hollywood actor, dies from having the painting. That was my starting out of the story. Then I made a good cast of characters to all fit around this elaborate story around the painting. Some are in the past of Henry Millers time in the story, and others are present. The locations, characters are all deeply explained, while leaving a little mystery that might not be explained with in the story. There is allot of lore.
For games that have inspired me would be Silent Hill, Myst, Scratches. It will not all be about horror with in the mod, that is the main intention but I also at the same time add that a since of adventure in there as well.

9. Was it hard starting out this project?
At first it was a challenge starting out. I did not have a ghost of a chance at figuring out what was the proper method for game development. Sometimes till this day I still don't sometimes. But over the past year I have learned tremendous lessons. These lessons that I have learned are how to manage people, and setting your goal and road path to meet the task that is needed.

10. Will this mod be perfect in every aspect?
I can tell you this mod will not be perfect. There will be a few drawbacks in level design, voice work, and game mechanic options. Is that to say its going to be bad? I most certainly can tell you that far from bad. It will be great. It is impossible to make a perfect game because everyone wants something else differently that will contradict the creator or the other players opinion on such things, this could include level design, puzzle design, scares, voice work, ect. The important thing when making a mod or game, is to put all your might and dedication and ambition into your product. If you do that, you will see success in the game or mod you are making. That is not to say that there will be somebody nitpicking about a certain aspect.

11. At the end of the day, what is it that you want players to notice in you're mod?
At the end of the day, I want the player to appreciate and like the story for what it is. If I can do that to 1 person, I have succeeded in my position as a mod developer. Other people might think that I want them to like the while thing. That's not what I am looking for. I don't care if you don't like the levels, the way I did that one scare, the puzzle design or any other thing thing besides the story. I have put allot of my effort to develop this story for players to enjoy, at the end of the day, that 1 person says he enjoyed my story for what it was, that makes me smile and feel accomplished after a years work.

12. When will the mod be released?
I relay wish I can give the answer to that, I relay do. As of this time of 12/30/2012, I am in the middle of changing to another job and getting back on my feet. So things are a little shaky in my personal life. I have a branch of new level ideas that I will put in, I know it wont bring anything new per-say to the story but it will add the richness and believably of the world that is presented to you around out. Its kinda on a "done when its done" mode right now, but know this, when it is released, the richness that you will experience, will be worth the wait.

As I come to the last stages of developing the mod, I would like to thank every single voice actor has participated and tried out as well in the mod. You are what brings this mod to life and puts character in the story. I thank you deeply for taking some of your time to give me the life of these characters that are in the story. If I could pay you I relay would but financial issues with me, and I sincerely mean that. I would also like to thank the Amnesia community for taking there time to create new models for mod developers to use to bring new ideas to life. I also lastly would like thank the Amnesia developers for making a unique gaming experience for players to enjoy and to let new people that are thinking about going into the industry or just being a hobbyist, making a elaborate complex and yet simple story creation engine (HPL2 Engine) for players to enjoy.

I would also like to give a big thanks for all the fans that are tracking this mod. It is so grateful to see such kind comments, and that what keeps me going when working on this.

Every single person that has helped me with in the mod, whether be small or big, will all be properly credited in equal to one another in the credits and official documentation upon release.

Your mod looks promising, I have no problem with waiting a few more months for it.

The Hands Resist Him Amnesia: The Dark Descent
Related Games