Some of the work that I have been doing recently to make the combat more fun!

Something that I have been working a lot on lately is making the combat more fun. Early on in the planning phases we decided to go down the route of having physical objects as the ammo and bullets, so you could see the projectile bounce off things and interact in the scene.

It quickly became apparent that the fights were too clunky. This probably came about because the game was to be primarily a puzzler with the fps only being a small aspect. So I have been improving the following items:

The actual mechanic of engaging with enemies didn’t feel fun, so whilst thinking about the AI I looked at the gun. You would press fire, there would be a little pause where the gun/squirrel would wave his arm, then a bullet/ acorn would lazily arc it's way in whichever direction you (the player) were looking. It was tough to aim and slow and didn’t feel right: 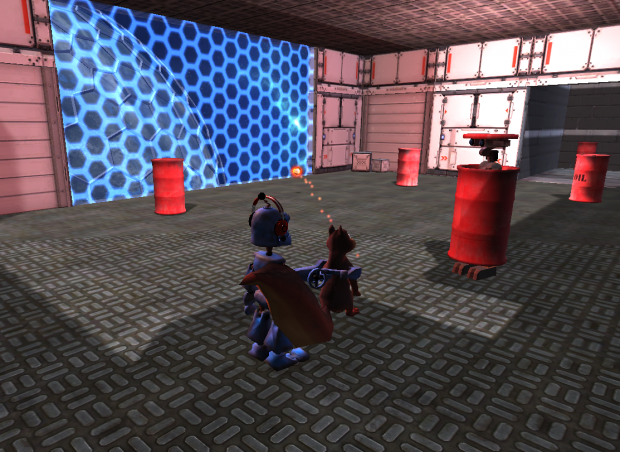 This has been replaced with more of an “fps” approach. Chiefly this has involved adding a reticle so you can see where you are aiming and you can autofire and machine gun stuff (instead of one click per shot). It’s a lot more fun, you can see a little snippet of it here: 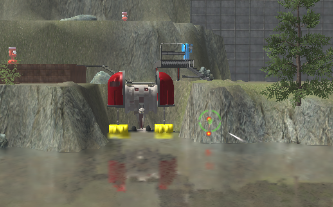 You can try how the shooting was in the demo here Indiedb.com

Also you can see it in the current demo clip:

In the next few months a new demo & trailer will be up which shows the improvements. It might be a little while because it's important for me to get that right!

Up until now the enemies have been a little bit dense. They knew how to run towards you, and they knew how to shoot... and that was it. So they were essentially about as tricky as an enemy in a 90s shooter. The new improved AI has them using cover, dodging and working as a team. There will be scope for messing with them when they are idle by shooting or dropping items to create a distraction - allowing you to sneak about past. All of these things hopefully should allow enemy encounters will be a lot more engaging.

In addition to the baddy and shooting improvements, you can now zoom out into a third person view to help with jumping about on platforms and such, and then zoom in to first person for when you want to shoot at things!

All of these things should allow for a more rich and rewarding combat experience. It has definitely been interesting to learn by trying things out - and how early on decisions about mechanics can affect the kinds of things that need to be worked on further into the development lifecycle, but getting these things right will be key.