Avast ye scurvy sea-dogs! Ride along as we discuss putting together Steam assets and some words from Bobby Rose on making music!

This weekend, January 29th, we'll be participating at the Global Game Jam event in San Diego, should be a blast! I highly encourage all aspiring game developers to jam at a local event near them! Its a great networking opportunity, helps stretch those game development muscles, and learn some new tricks!

Some tunes to open up : Anchors Aweigh!

As part of including Trading Cards on Steam there is a list of art assets that you have to include. Steam Card Exchange is an easy way to see all these Trading Card assets that various games have done; due note that many games don't have complete sets or were early in the process before Valve had a review process/recommendations to steamworks developers on what to and not do.

1) Trading Cards
The images for the trading cards themselves; a "zoomed in" 1920x1080px and 206x184px placed in card frame. The small one is what most people will see. Because of this will be where we'll focus more attention on down the road after all the art is more in place and draw on the best pieces we've put together closer to release. A lot of games will use character portraits for their cards.

2) Badges
There are 6 badges required for Steam Trading Cards, badges 1-5 are earned and leveled up each time you collect and craft a badge from an entire set of cards. The 6th is the foil badge which requires collecting a separate set of rare foil cards. The images are 80x80px and the 6th badge needs to stand out rather then a progression for the 1-5 set.

Each badge crafting gives 1 emoticon, which has a 54x54px "large" preview image and a 18x18px "use" size which is used within Steam Chat.

For these our artist Katie started with the 54x54px size and then scaled them down to 18x18px to polish up. Steam.tools has a great view of emoticons already on Steam; letters, hearts, and smiling faces I imagine are the most commonly used of them, with letters being used to spell words on profile pages and hearts during actual chatting. We chose to start our emoticon set with some pirate themed objects and will revist adding more soon; 5 is a min for Steam and 10 is max.

4) Profile Backgrounds
These need to be 1920px wide and can be however tall. On the usual Steam client the middle section will be blocked by profile information. So the unobstructed parts are on the left and right sides. For these we took a concept arty feel to them and we'll need 3 to 10 of them before we ship. 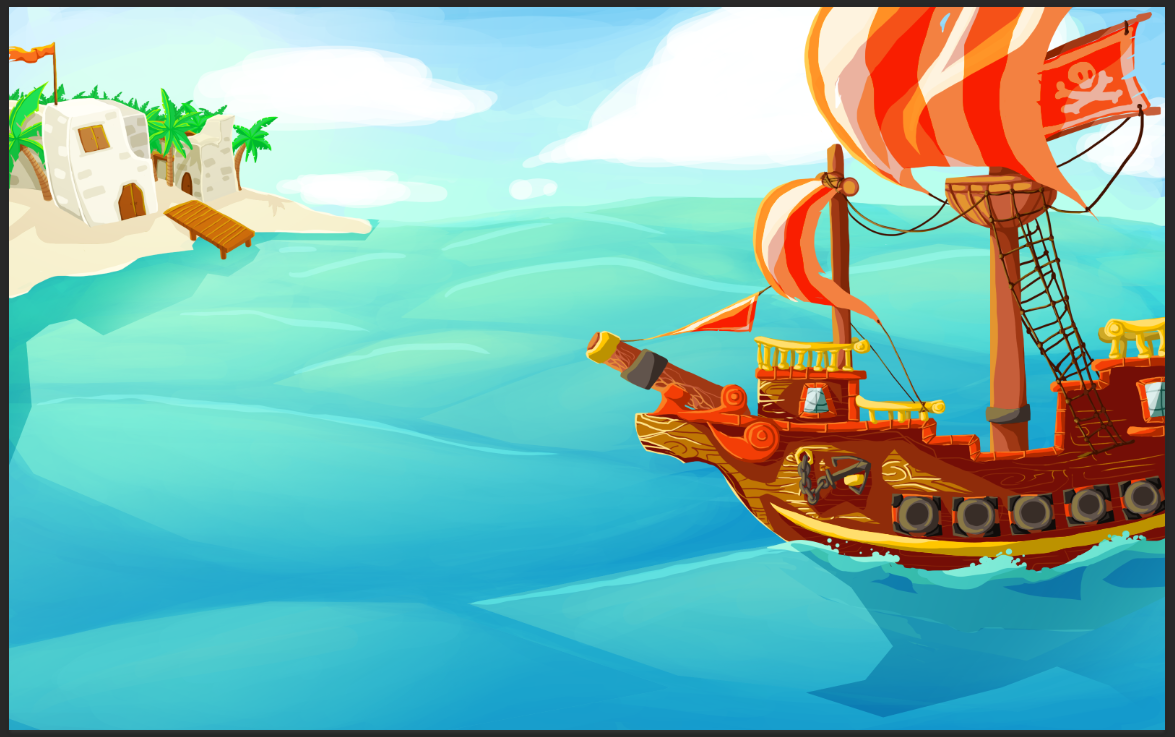 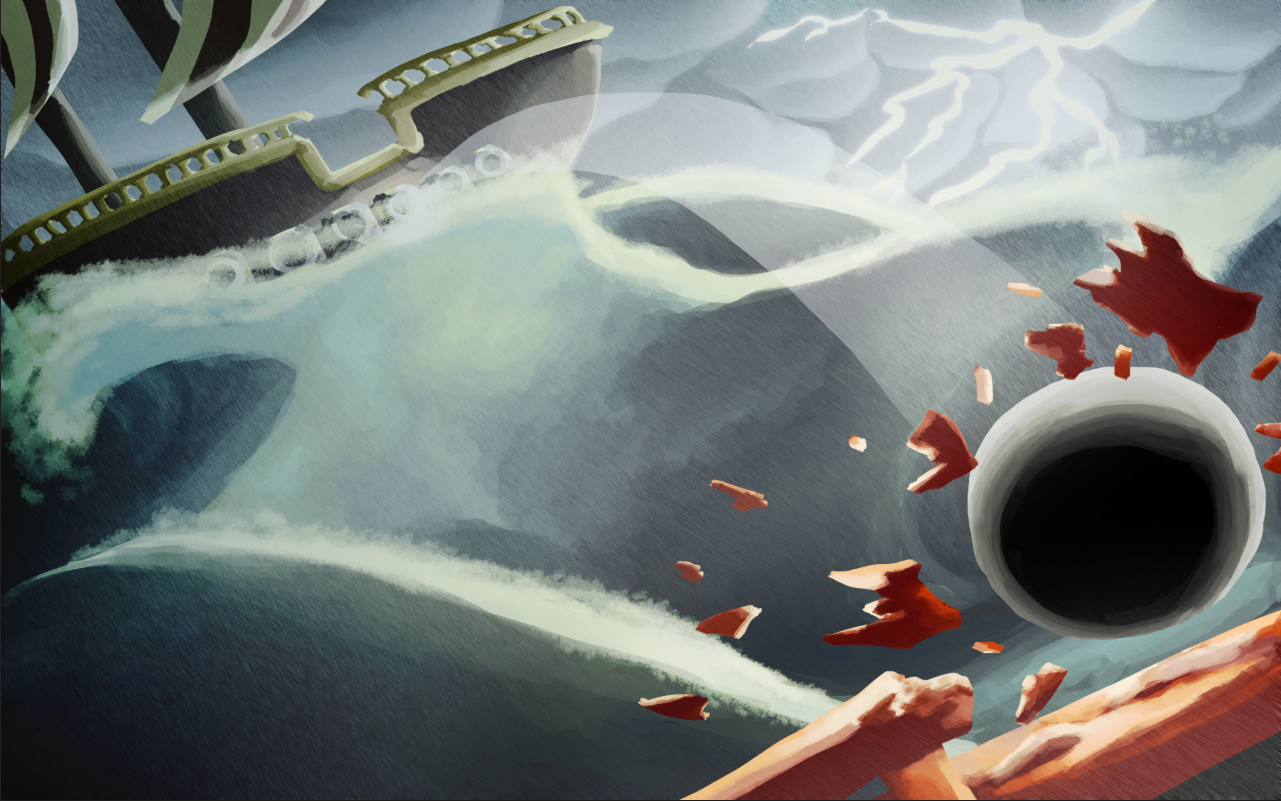 This 3rd one is still in sketched out but you can see the concepting process in action. 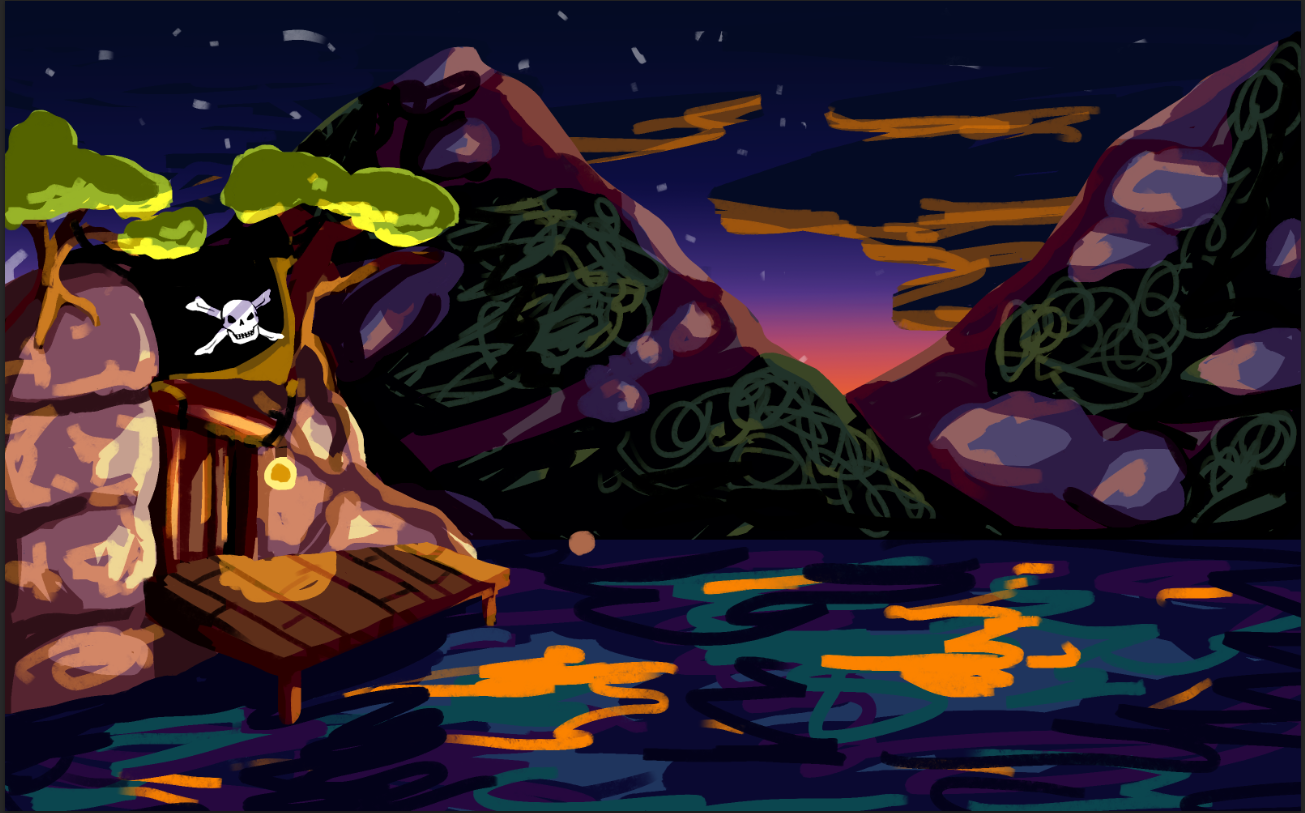 Bobby Rose is our music composer and scores works for Films, Television and Video games. His works have been featured on movies for the Lifetime Channel and National Geographic, as well as games on Steam. He began studying the trumpet in middle school. By high school, he was already composing music for recreational video game projects. He has always had a fascination for both video game and film music and has been composing in the style for almost 10 years. He studied music composition at UCSD (Bachelor's degree) and went on to receive a Master's in Music for Film from the Pacific Northwest Film Composition program at the Seattle Film Institute. While there, he was given the opportunity to score a few short films and record with ensembles ranging from 3 musicians to a full orchestra.

Since graduating, he has been working on films for Lifetime with Richard Bowers, doing additional music. He also works with film composer Ceiri Torjussen on a variety of projects.

I asked Bobby a couple questions on his process for producing the music on Unearned Bounty that I hope can help any aspiring composers.

What software do you use?

I mostly used Kontakt based libraries like Cinesamples, Spitfire, and some Heavyocity for percussion. I also used a few Eastwest libraries (hollywood strings, ra, and gypsy) and one Best Service one (Era: Medieval Legends II).

We got the Spitfire Albion bundle which included Albion One, Spitfire Percussion, Spitfire Solo Strings, and Harp.

Albion is a large orchestral library that was recorded and programmed in such a way to give you that “big epic orchestra” sound. Instead of having individual instruments (violins, cello, clarinet, trumpet, etc.) it is broken into sections (strings, brass, woodwinds) and mixed properly. Now, instead of having to write 5 individual parts for the strings and then mix them to sound good and balanced, I can just load one patch and write it all there. It instantly sounds much better. The library itself also sounds amazing.

Solo strings also found its use in Unearned Bounty, as I lacked a good solo string library. While some of these might eventually be replaced with live recordings, the fact that I could create a nice and convincing sound quickly so I didn’t have to waste time on it was important. You don’t want to spend hours working on something you know will be replaced later. And in the end, these sounds are totally useable and could be used in the final product.

How do you first approach starting a new track?

When it is the first track to a score like this, a lot of time was spent figuring out sounds I wanted to use. I knew there would be obvious orchestral instruments and styles to go with as we had established that already, but I wanted to at least have a few sounds that weren’t in the typical orchestra. I pretty much just had to think about stereotypical “pirate” sounds. That’s where I got the accordion and dulcimer (was actually a langeleik) sound. The mandolin, guitar, fiddle, and piccolo seemed appropriate with a sort of celtic/swashbuckling feel. The marimba just sounded right to me.

Another thing to think about was style. I had decided I wanted that “swashbuckling” thing, and with the recent blockbusters, a triplet feel seemed appropriate. I did, however, decide early on that I didn’t want the whole thing to be triplets.

As far as starting a new track, I first thought about these things. Was there an instrument or style I really wanted to focus on? Was this going to be big and epic or kind of quirky? In this score, I didn’t have to think about looping or layers, but I did need to think about intensity level. From there, I just sort of started to write. Maybe reuse a theme or something similar to it that I had established in one track to hold it all together. There wasn’t normally much sketched out beforehand and I didn’t necessarily have a strong direction I was headed. Just did what felt right as I went.

I have a template set up for this project that preloaded a lot of the instruments I had used on previous tracks in case I wanted to have the same sound again. I would just load up DP and start finding the pulse I wanted to use for the track.

Once or twice I did hum something while waiting for a ride and typed the notes into my phone. Normally it was just a short “groove” I could use. Most I didn’t actually end up using anyway, but the main theme’s pulse did come from that, although it wasn’t in triplets at the time.

What is something you learned while working on this project?

Nothing jumps out as one thing I learned in particular. It has been a lot of little things; whether it is a new way to mix instruments together, or how to route them through my program, or even just a new way to write. The experience starts to build up. Even listening from tracks I wrote at the beginning to the last ones I wrote, I feel like I’ve gotten better. A lot of things are just picked up as you go. Learn by doing.

Thanks again for reading! We hope to be sailing with you soon!

this sounds really fun, i was looking for a game like one piece :)

Thanks, One Piece is a pretty cool show. I hope this game is something you will enjoy =)