As I'm nearing closer to a fully playable build, things have been ramping up quickly. In between working on new levels and key features, I'm constantly refining the AI and procedural generation code. I want everything to feel as natural and varied as possible. It is a mystery after all, so the investigation process needs to be quite rewarding.

In that vein, I've improved the AI in both conversation and combat situations. The hostile AI will now attempt to search for the player in a patrolling fashion until they are found. From there, they are quick to the draw, making it a very dangerous situation. Non-combat AI will throw up their arms in surrender and essentially cower in fear. This also changes their dialogue tree accordingly. In addition, NPCs will further assist in identifying the culprit if possible. This can be seen in the animation below.

Besides the major new levels, I've also implemented the first real shop in-game. As opposed to the drug store where the player would not want to buy anything essential to the investigation, there is now a market which sells useful supplies such as ammunition, lockpicks, and confidential information on the killer.

One of the newest and most mysterious levels is the Warehouse. Rumored to be owned by the mob, the rather plain first floor contains a single elevator. The elevator shaft leads deep down in to the unknown. What lies below, along with numerous other areas, is up to the player to discover. Here is a little shot of the warehouse with the mysterious elevator. 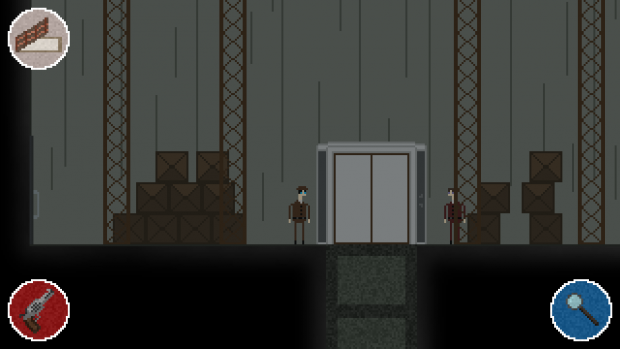 To go with the wealth of newer, more expansive levels, I've also added a few more locked doors to ward off potential entrants. The lockpicking system has gotten a few updates to better balance the system of breaking in to areas. The rewards for such are now greater, but they also come with more risk. For example, now the player can break in to the bank vault and steal the money within. As expected, this put the player directly on the most-wanted list, causing the entire police force to be out searching for him. Below is an animation of the player picking a lock in the Slums.

The work-stress balance is always important to consider when developing games. If I continue pushing even harder, the results might falter in some ways. Thus, I'm making sure to pace myself and develop in moderation. Hopefully, updates will continue around the same rate. As I'm nearing the end of the major gameplay features, a fully playable build is not too far off. If all goes well, a beta version of the game will be available sometime within the next few updates. Stay tuned!