This has been long overdue but I finally got around to implementing energy shields.

This has been long overdue but I finally got around to implementing energy shields. The main purpose of energy shields is to provide the player with kind of a health buffer, particularly against ranged opponents, so they can get into the fight and survive long enough to establish the control over the battlefield. 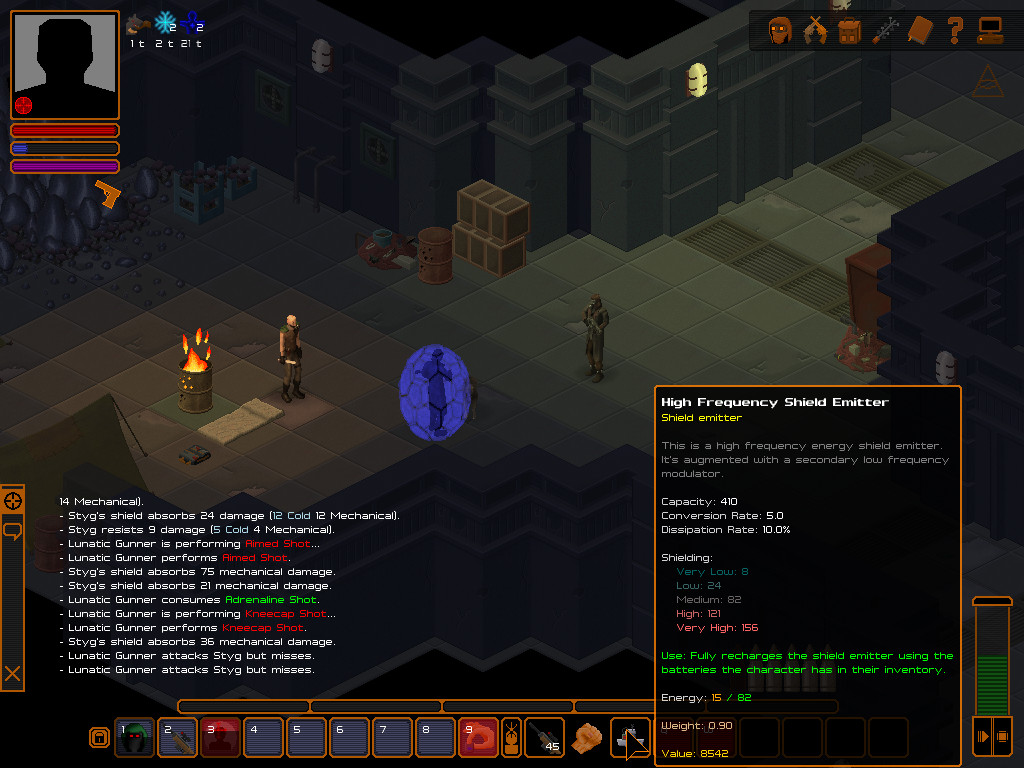 So the way the shields work is they block a certain amount of damage from each direct attack based on impact speed (very slow to very fast) rather than on damage type (mechanical, heat, etc). The amount of damage a shield can absorb in total is equal to its max energy times conversion rate. Shields also dissipate over time, so you won't want to keep them running unless they are needed to block damage. They cannot be recharged in combat.

The amount of damage blocked for each impact speed depends on the modulators used to craft/generate the shield emitter, but overall shield emitters are much more effective against higher impact speeds, so melee characters and, to a lesser extent crossbow users, will have an edge when fighting shielded enemies. Additionally, most types of melee weapons will ignore certain amount of shield (and some special attacks ignore it completely) so we can balance out their usefulness against the hard hitting sledgehammers - knives ignore 60% of energy shielding, fist weapons 80% and unarmed attacks 100%.

Concerning what attack has which impact speed - it's displayed for the weapons, but most other stuff (psi, grenades, etc) don't list it. I'm not sure how I'm going to handle this, because I don't want to clutter the descriptions so maybe a better solution would be to list it somewhere else or have an NPC educate the player about it. We'll see, I haven't made up my mind yet. But until the, here's how it works basically:

We still haven't done much balance testing regarding how effective shields are right now. I did some number crunching, but until we put it to test in a real playthrough and also have you the players have a go at it, it's hard to balance it out properly.

In other news, here's the other stuff I've been working on:

Also, I re-balanced bunch of feats, mostly buffing those who were in need of a buff and maybe nerfing one or two overpowered ones. I tried to hit all the feats that needed love, but there are still a couple I'm not sure how to fix or just don't have the mechanics in place to do so yet. Anyway, here's the list of changes:

As far the content is concerned, we're working on new areas, quests and creatures. One of the goals is to add more side quests to SGS (and surrounding areas) and Rail Crossing which we feel are most in need of those. We'll also be adding a major new station with the next update, but more on that in some future dev log (won't be Core City just yet, though). ;)