Well we finally did it, we ported the engine back onto Windows.

My name is Matt and I am the lead developer for Game Of Engines. In this article, I will take a little more about Project ALICE and what it is.

1. Thanks Again
I would like to start off by once again thanking all of our new followers. I really appreciate the support and hope you join us as Alpha Testers toward the end of March. Remember, if you have any friends that may be interested in making their own games then please help spread the word about Game Of Engines.

2. About ALICE
2 Years ago, I began work on a game development toolkit that would allow me to make my own games. This toolkit was development on Windows for many months until I decided to port the toolkit to the Mac. However, Somewhere during development on the Mac, I lost track of the Windows version and ultimately it became horribly buggy and outdated and that is how it remained... until now!
A few weeks ago, I began porting the toolkit and engine back over to Windows under the codename: ALICE. This project has finally finished and I am proud to announce that we once again have full support for Windows.

3. Why Did I Call It Alice?
I called this Engine update ALICE, because much like the main protagonist from the Resident Evil Films; The Engine is Fast, Tough and can store lots of information!

4. Lua
The biggest update to Project Alice (Light Engine for Windows) has been the Lua interpretor. I have spent days porting the lua functions over from OSX and have taken a quick screenshot of some of them for you:

5. Toolkit
For the first time in a while, I am pleased to show you all Game Of Engines V1.2 running on Windows: 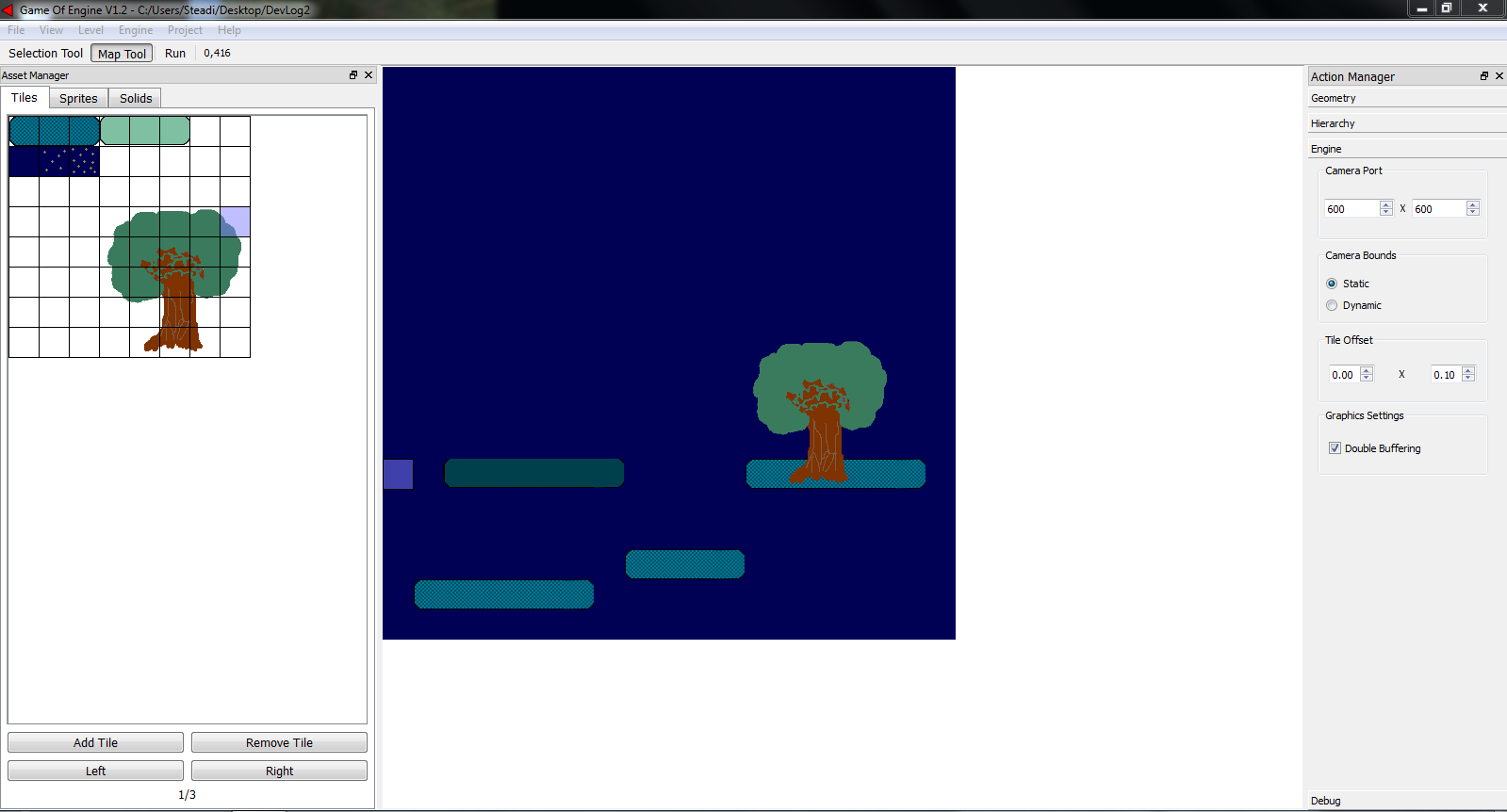 As you can see from the image above not a lot has changed, but I can assure you that the speed has been greatly improved and we have removed a lot of Dead Code that has been slowing it down. I will be holding a few live streams soon that will go over the toolkit in detail and you can watch me make some games on it... then you can try it for yourself!

6. Light Engine
The Game Of Engines toolkit allows users to create games but the real magic works behind the scenes; the game engine itself. Light Engine is a portable game engine that we have implemented into GoE to help you run your games. The Engine is fast, cross-platform, durable and takes up very little space.
Light Engine is fully controllable via the Lua Scripting Language so even if you know nothing about programming - You can make huge 2D / 3D games in a day or two.

7. Screenshot Of The Engine
Here is a quick screenshot of the engine running a small map I put together with GoE and my own s*** tiles: 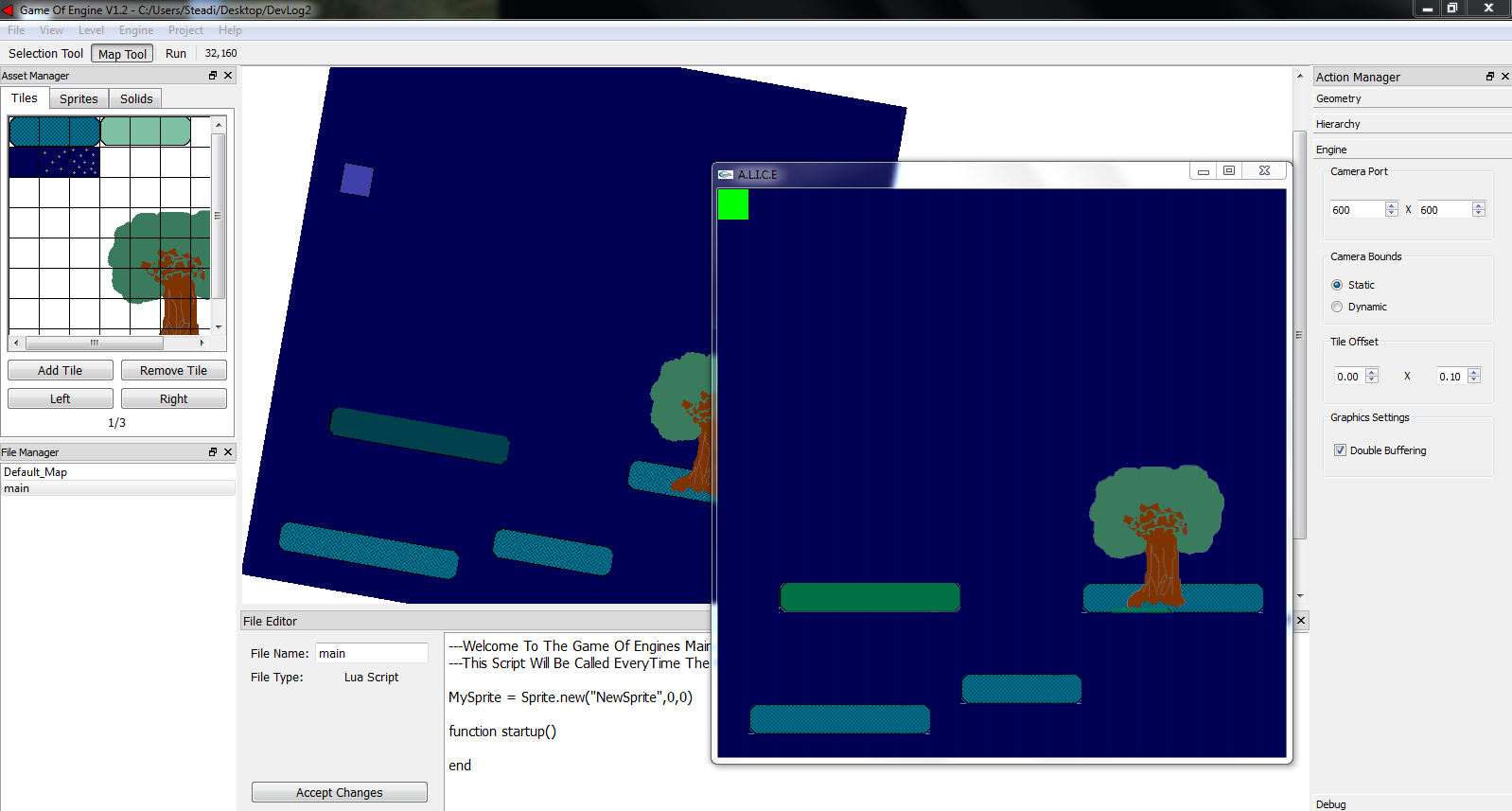 8. Double Buffering
I may have gone over this before in a previous article but I will go over it in a bit more detail. The Light Engine was updated recently and one of the biggest features added was it's new Double Buffering System. Your games can now look better than ever and have twice the Solid-Collision-Object-Detection-Density than it did before.

9. Platform Status
Light Engine allows you to run your games on Windows, Mac, Linux and the Nintendo DS with no problems. The next platforms I aim to target are iOS and Android - With these two platforms on the list the engine will be able to run games not only on your PC but your Tablets and Mobile Phones also.

10. Thanks For Reading
Thank you all for reading. I would once again like to thank you all for supporting this toolkit and would like to apologise for any errors in my grammar as it is quite late.

Thanks for Reading,
Matt