An update on the dwarf mechanics that are in place for the alpha.

First let me introduce myself i am Stick the newest member of the modding team, i have the honor of making the first dev diary leading up to the alpha release in this i will focus on the dwarfs. But let me first show you how the south deeproads look at the movement. 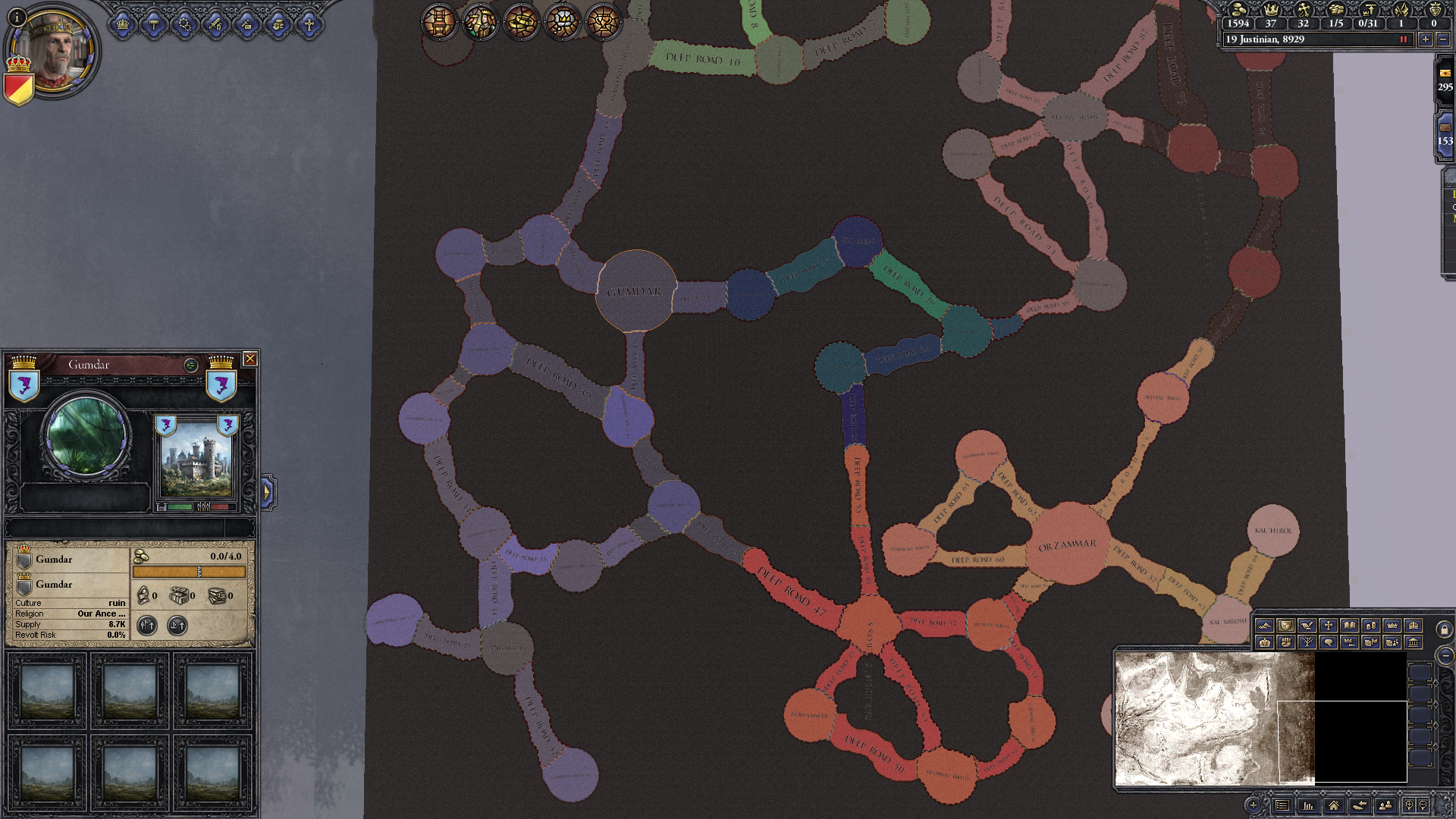 The deeproads is now mostly controlled my ruins, the dwarfs can colonize these ruins and gain control of them, it is a very costly process around 10k gold for 1 road. There are now 3 tiers of thaigs firstly roads the lowest tier, normal thaig the middle tier and great thaig as the last tier, the higher tier the better building it can have. The colony's is going to interact heavily with the darkspawn mechanics and they are a tale for another time 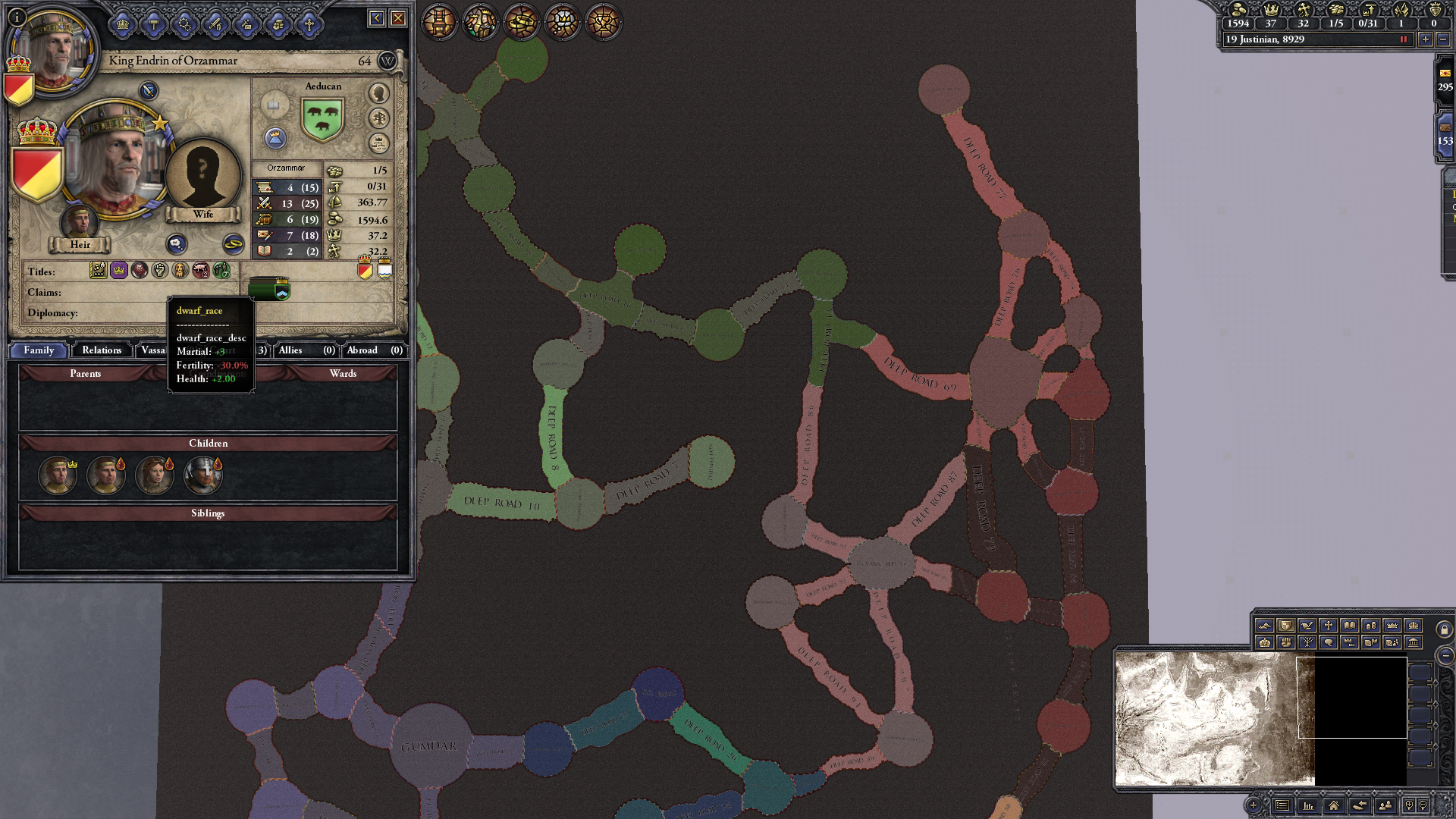 All dwarfs gain martial and health but lose fertility not much to tell about this. 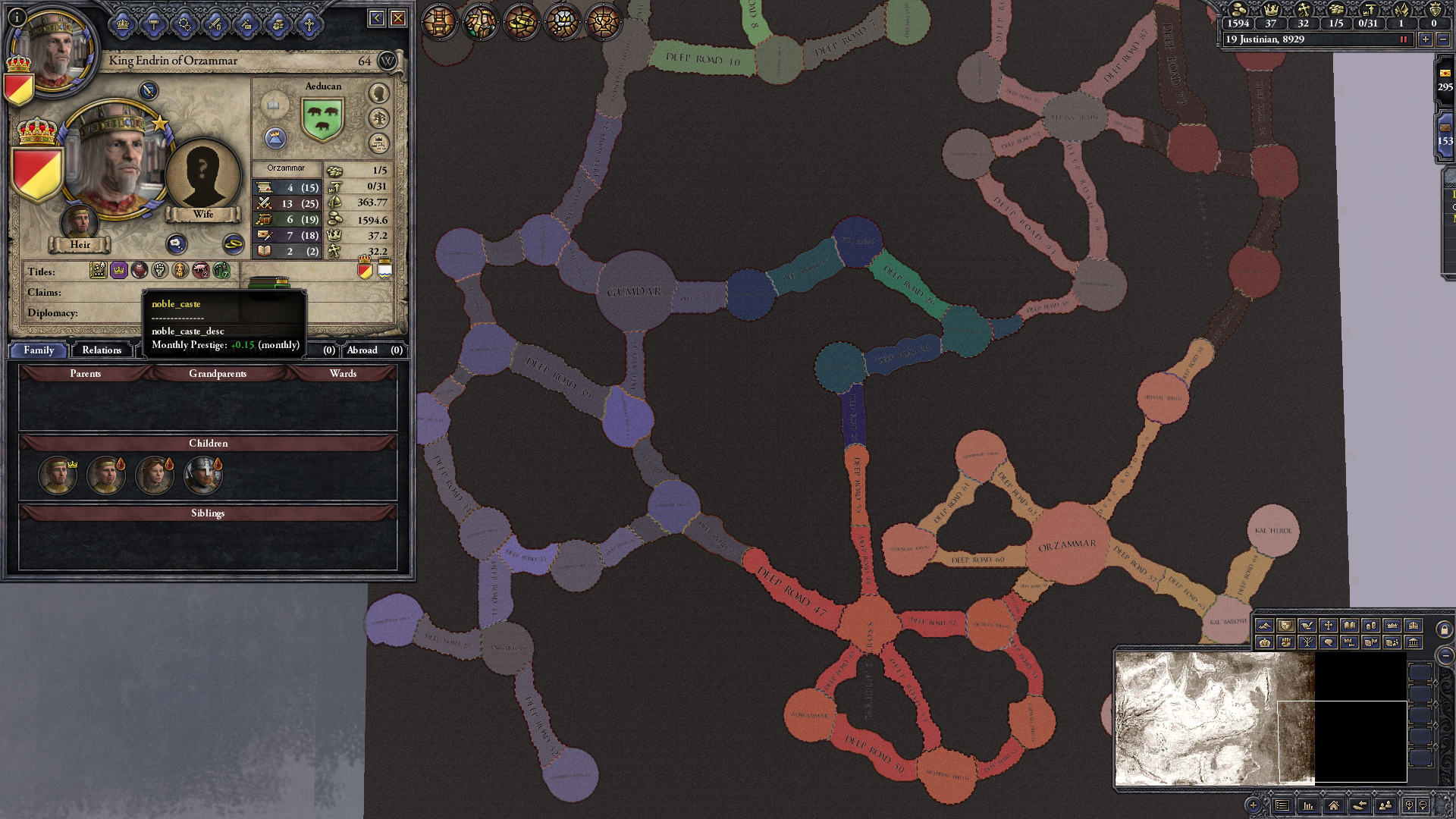 All dwarfs are of a caste it when a baby is born it gain the caste of the same sex parent, the castes are going to have "flavor events" tied to them, as a smith forging an artifact, or a noble getting the change to be with a noble hunter. The dwarf commands have to be taken for the warrior or noble caste as a general rule. The random generated characters will have more probability to take a caste suitable to their holded holding

This is all the news we got for you for now, we will try to get dev diarys out more often as i know how it is to be you knowing next to nothing about our progress

But we are not done yet as we are going to have a little competition the winner is getting a thiag named after them(Need to be a lore friendly name). All you need to do is answer this question

What is the legion of the dead??

What is the legion of the dead??
Legion of the dead is a unit of dwarfs that dishonored they family,or choose to join them.
The ones that join have 1 normal funeral that rebresents that they joined the dead,then they go intro the deep road and single handed kill/capture and secure the deep roads/thaigs and kill the darkspawn.When they die they are buried in stone coffins which means that the last one to die will not be buried in this way,
Bassicly they are cold hearthed darkspawn killersThat seeks a honored death to repay for they reason of joining .In Origins you help them free they great HQ in a thaig and are considered to be made a caste.

Nice to see an update of the status of the mod. As a modder myself I know it can be difficult to sustain yourself in working on mods, especially in a large project, so I commend you and your team for keeping this going; I can't wait until the mod becomes playable (beyond the pre-alpha stage)!

Anyway, in response to your competition:

'What is the Legion of the Dead?'

The Legion of the Dead is a Dwarven military order that answers solely to the monarch in Orzammar, and are dedicated to combating the darkspawn within the Deep Roads, although on occasion they have/can venture to the surface to combat them there, as seen during the Fifth Blight.

There are several key features that distinguishes the Legion of the Dead from the main dwarven army: The first stems from their initiation rite, wherein the recruits are given a funeral, where they proceed to cut themselves off from their past life and say farewell to their loved ones, in order for them to have no fear of the darkspawn due to them already being "dead" so to speak. Another key feature is that they owe their sole loyalty to whomever the monarch of Orzammar is. Thirdly, they typically (not unlike the Grey Wardens) recruit any Dwarves regardless of their caste or place in society: Some do so to have debts forgiven to their families, others to regain honour either for themselves or for their family/house, others to atone for their crimes and some for the glory of it (it should also be noted that members of other races can join, but it's extremely, extremely rare). The final feature is that, as alluded to above, the Legion is open to all regardless of caste or social status, as the Legion of the Dead, unlike the main Dwarven army, is not in fact a caste and lacks any sort of meaningful social status within the main Dwarven society, although they can sort of be elevated to the ranks of nobility in the DA:O sidequest "The Dead Caste" located in 'The Dead Trenches', as your character can discover their historical links to nobility; a House Ferald specifically.

A final note, they used to have their headquarters at Bownammar, but lost it some time in the past.

The winner is MartinSanguine i have messaged you

Glad to see this is still alive, I vaguely remember this being around 2-3 years ago although I may be wrong.

Still I do have a question, can Dwarves who manage to accomplish something great end up becoming Paragons?

yes they can. how we will get too

Is this still being used for the mod? I know this was made by the last mod team but is the new mod team picking the thaig idea up and using it?