In Luckless Seven alpha build 0.660, massive parts of the opening campaign have been redone and many new quality of life features have been added.

We've said it before, and we say it again today: Day 1 of Luckless Seven is finished. I’m writing today to provide a recap of what we’ve been working towards, our accomplishments, and what’s next in the development of the game!

So, what do we mean when we say that Day 1 is done? If you’ve been following our progress over the last months, you’re largely privy to the changes taking place to Luckless Seven’s opening sequence, the Ekosi tutorials, the writing, the start menu, and more. If you haven’t been tuned in, however, you’ve come back at a great time. Here’s what we’ve been up to.

Opening sequence. Feedback from our own playtesting and last year’s Ohio Game Developer Expo (OGDE) suggested that we work on the very opening of the game. Some players felt confused about Mark, who he is, and what his goals are. Upon review, we agreed that the story’s introduction may have been too cryptic, so establishing more narrative context in the opening scene became an important mission for us.

So, one of the desires shared by players was to gain more narrative context early in the game. Another group of players, however, expressed interest in experiencing Ekosi as quickly as possible. We saw the merit in both ideas, so we decided to launch the game with a battle that would communicate quickly and strongly who Mark was. But who would this first match be against? We didn’t want to overhaul the story and quest design that we were largely pleased with, so that meant finding an Ekosi opponent for Mark that was in his apartment. While Mark’s father and the Ekosi tutorial instructor were compelling options, we wanted something more exciting.

We decided on a dream sequence, and the doors of opportunity swung open. As the game’s writer, I was eager to seize a great opportunity to investigate Mark’s unconscious feelings about his friends and family. How does Mark interpret his relationship with his parents? Who are his friends? What are his insecurities? And what better nightmare companion to embody Mark’s worries than this supernatural beast?

Has the supernatural invaded the world of Luckless Seven?

Teaching Ekosi. OGDE taught us a lot about the game and where we had to go with it, but the primary feedback we received was about Ekosi and our tutorials. In the expo setting, we found a wide sampling of video game players with different ages, backgrounds, and preferences. Feedback about Ekosi was diverse, but largely fell into two categories: some players felt lost and needed more information, while others felt burdened with text and handholding.

Solving the binary conundrum stumped us for a while. How do you take care of two player groups on seemingly opposite sides of the spectrum? Ultimately, the Werewolf/Nightmare battle led the way to an answer. While we wanted the player to be thrust into the turn-based action immediately, we had to concede that the player needs some information before asking them to make decisions in Ekosi. To offer the absolute minimal information necessary in the least visually obstructive manner, we identified tooltips (written in Mark’s dream state) as a great solution.

When we finished writing those, we thought, “Hey, these are pretty handy,” and we created a coherent set of tooltips for early gameplay. For those who didn’t need the tooltips, we made them toggleable. For those who needed more information, we drafted an Ekosi guide complete with basic rules and strategic advice.

Much of the original tutorial information has also been distilled

into small tooltips that you can refer to during battle.

Writing. Ahh, writing: my subject. I’ll try to be brief! A year ago, we had virtually no story for Day 1. Then we made it, and we were happy with it. And then we stared at it for a year as we worked on the next two “days” of gameplay. No matter how much you like something, if you spend too much time with it, you start to see its flaws. While this can be a difficult lesson for friends that become roommates, it was a very important experience for us as we work to cultivate an interesting story.

Looking back on the plot of Day 1, I found it hard to answer a lot of important questions about my writing. Why should we care about Mark? How does Mark feel about his family? If Mark is unhappy, why? My inability to answer was the result of multiple problems, but perhaps none greater than shallow characterization.

And so resolving that problem has been my emphasis for the last months. In the new demo of the game, you’ll find a more passionate Mark burdened by a harshly critical mother. You’ll find a father looking to live vicariously through his son. You’ll find the seeds of sibling conflict and friendship jealousy. All of Luckless Seven’s story can’t be told on Day 1, but we’re glad we’ve made the effort to launch the game with more interesting characters and conflicts.

Start Menu. When I came onboard the project last year, our start menu’s camera held a distant shot of Mark standing alone outside. Since that time, however, the characters have grown in depth a lot. Rather than just being Mark’s coming of age story, we wanted to emphasize the importance of every Luckless Seven character, even in the start menu. So we did! The new menu shows all of the seven main characters, their personalities, and their relationships. We also think it’s just plain prettier.

A world of card games and adventure awaits!

Little Things. Finally, it wouldn’t be a blogpost without mentioning the little things that our team has been laboring away on to refine and perfect the user experience in Luckless Seven. Among them are the recent inclusion of new “talking” portraits which have immensely improved visual diversity during dialogue, a new fade-in effect that’s been applied to the Ekosi interface, and other quality-of-life improvements like zoom and autorun features. These changes may be small, but we think the constant little improvements add up to create a massively improved player experience. 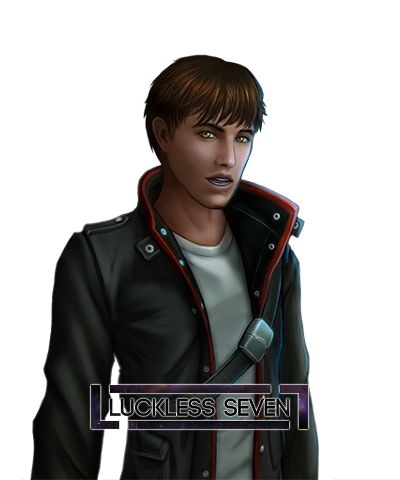 With our latest alpha build, we've added many new portrait expressions for the main characters.

Needless to say, it’s been a productive time at Deckpoint Studio! But to what end? I’m sure it’s obvious, but all of these changes have been in service of polishing the game’s opening. We think we have a great game and story to share, and we think that the changes to Day 1 have brought it to match the quality of writing and design for Days 2 and 3. We’re extremely happy about what we’ve accomplished during this period in development, and we’re looking forward to beginning a new one as we turn our attention to Day 4 and beyond. Up next are new locations, characters, and quests in the Luckless Seven adventure.

If you haven’t played in a while, give the new demo a download and let us know what you think. You can download Demo 0.660 at our IndieDB page.

The improvements we’ve been working on are a direct result of comments and suggestions from backers and generous playtesters like you. Your contribution is more than just welcome: it’s an essential part of development!

As always, keep an eye on our IndieDB page for updated demos, as we’ll only be announcing major releases in our Kickstarter/blog posts.