The spooky skull has come out of its horror hole and- OH GOD WHAT IS THAT?

Progress has been piling on and the latest inclusion has thoroughly disturbed pretty much everyone who's seen it, so now, you get to see it too!

The original teaser for this creature was posted in al older article and the concept for it was "a pile of corpses which woke up and decided it needed to be BIGGER, but that it didn't want to move around too much primarily because it's a pile of corpses".

So I worked on creating the uhh "body" which is cut up and pieced together from other enemies in the game. Primarily the Shamblers. 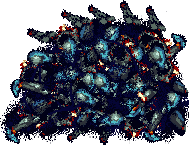 Great, that looks particularly gory and gross and confusing, just what I need it to be. Next, I needed to give it a way to reach out and ruin your day. So I fiddled with the idea of making an arm from other pieces but it ended up being way too confusing to tell what was the arm and what was the body. I figured that with an entire spine as a "neck" and an oversized skull for a head, well, why not just keep using other oversize bones? So I nabbed an arm image and got to work chopping it up.

The base image is just a skeletal arm I found and heavily modified, cutting it into two pieces based on the pivot point of the arm (elbow).

I also added some gory gross stuff and some "veins" to show that whatever force bringing this creature together, it moved all the way up the arm.

With these two pieces I was able to get the arm working and using Inverse Kinematics to get them moving, the second time I've used IK in the game and it ended up leading me to reworking how IK works in the game, making it a good deal more efficient!

The hand though... ehhh, I got lazy. Originally I had intended to make it a full bony hand which could grab you and give you bad dreams but unfortunately the time I spent even conceptualizing how to move and animate everything was taking hours, and I decided to cut my losses and go with something a bit more visceral and simple.

The claw, which I believe called from some Jurassic miscreant, was veined up in the same fashion as the other bits. Then I just had to slap it all together. 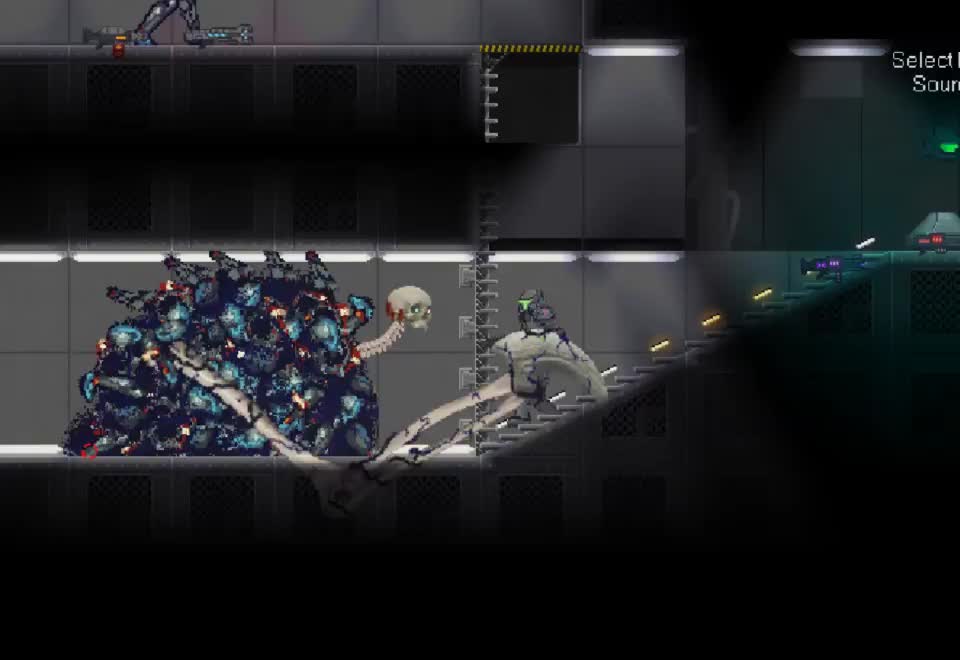 Woof! That's uhh , ok sure. Kind of looks silly with it just kind of... existing there, so I had to give it a bit more life and personality. To do that I figured I'd make it drag itself along since it ain't got no legs. Then I thought, what if its action of movement both acted as an attack, and a form of protection? So I made it so that its claw is solid, and a bit larger, and blocks shots as well as dealing damage to anything it strikes with enough speed, and so, the "final" version was born, I present The Hulk (no not THAT one):

The Hulk enemy is designed to block passages and slowly crawl its way towards reducing the active space you have to maneuver. It will show up rarely but will be a choke point in missions or areas within the Idaho. The claw blocks shots so you'll need to time when you strike to maximize your damage dealt to it. Alternatively if you find away back around behind it, you can damage it with impunity.

So there you have it, yet another abject horror to deal with as you make your way through the stricken space station.

I'll have more to add very soon as progress has been going crazy well, for an example, I actually finished the Hulk a tenday ago, but haven't gotten around to formatting and posting articles to cover it all, but the backlog is a good thing! The more I have the more progress I'm making and I will never not like getting things done.

Anywho, for a final tidbit, here the title screen for the game!

Until next time, stay in the light.

looks damn amazing cant wait to kill some of them monsters, love that halo vibe your game kindda haves

This looks so cool! I was thinking of Halo meets Metroid, but then you have a very unique horror design for the aliens which I really like!