Second Indie Game Devlog for ReignScape : An original and unique 2D strategy /city builder game made with GodotEngine C# and C ! This week I worked on the parallax background and the GUI !

I’ve decided to create a pre-alpha version of ReignScape for the first of August.
A little bit of a challenge, so I’ll explain to you why I took this decision.

And you’ll see the progress I made this week of course !

So as I said, I took the decision to create and publish a pre-Alpha version for the first of August, which gave me 2 weeks to do it.

That is a real challenge, but I think it is a good idea and I would recommend this to any game dev so let me give you the reasons.

The first reason is a motivational one. When you create a quite complex game you need to focus on it for months, starting is easy as you are over motivated by your idea, but the more time you spend on it, the more obstacles you encounter, the harder it is to keep up this initial motivation.

This is totally normal, but I think it causes a lot of game devs to stop their project.

So deciding to publish a very rudimentary version of your game can really help with that.
It creates a milestone and acts as a tiny release, finishing your game seems too far but finishing this simple version is way more accessible !

The second reason is because it helps to sort and select the most important tasks.
It’s easy to get lost because there are so many things to do.

Prioritizing is excellent, and when you need to publish your game in 2 weeks you don’t have the choice, you need to select and focus on the most important tasks, the ones which will bring your game to life in fact !

Last but not least, if you decide to publish your version or even if you just send it to your friends, you’ll get precious feedback.
Even in early stages, getting people playing your game and telling you what they would expect or not from it can help you to improve it a ton.

I hope those advises will help you.

Now that you know why I took this decision, let’s dive into my first week creating a pre alpha version of ReignScape !

When the logcabines searched for a Tree near the end of the chunks it induced a crash of the server, added a check so I’m sure the point is not null and that’s it !

I had a problem with the initialization of some trees but figured out it was not a problem… Easy solving !

When two farmers were close enough to each other one could end up being stuck in a field forever, poor farmer !
So I created a locking system, now they book the field before going to it, cool !

I finished by a simple one, the terrain smoothing was not setted up correctly when at game start, one line of code and voila never been so smooth !

During the afternoon I enhanced the Parallax Background quite a lot, I’m very happy with the result/

I’m just waiting on godot 4 so I can make those layers transparent in order to have better color adjustment with the background !

I spent my morning designing the new GUI !

And I spent the whole evening creating new menus for the game. 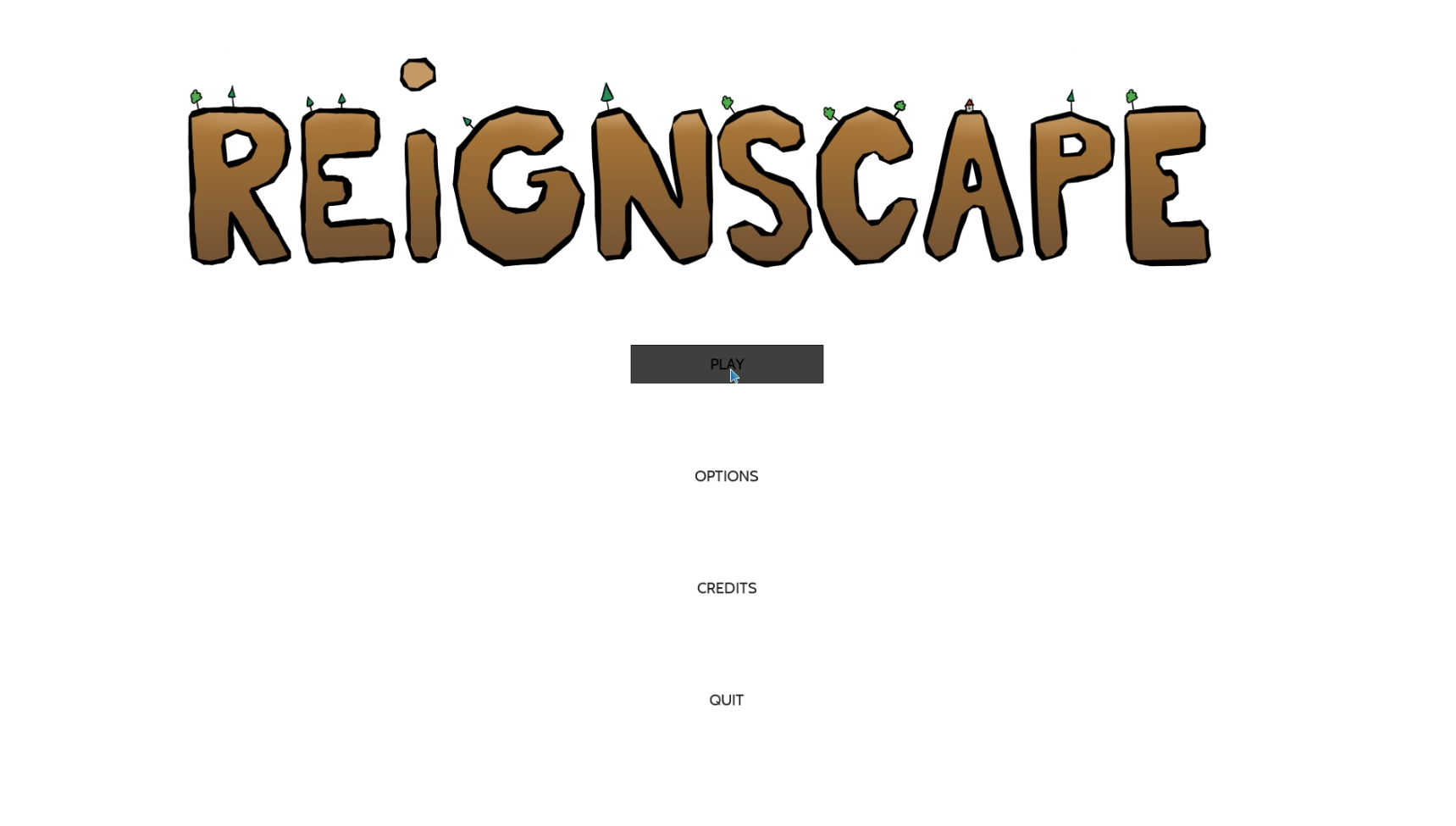 I also made a pretty cool button so you can delete a game, with a delay of course, I don’t want you to delete your preferred game by accident ! 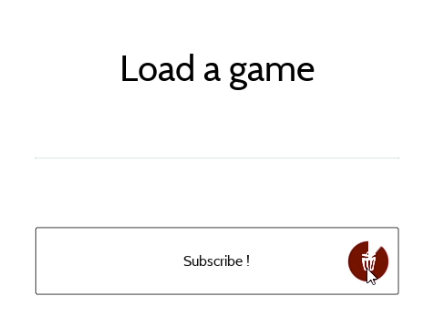 On Wednesday I was ready to start creating the Game User Interface.
It was a lot of work as I wanted something completely different from what I did for the mock up.

My idea is that when you hover or select a structure, you can see all the relative information at the bottom of the screen which is quite unoccupied.

The first step was to be able to see the structure name.
And let me say things didn’t go well.
I noticed the structure names were not corresponding to my mouse position.. So I decided to add the point and chunk number so I can have a better understanding of what is happening.

And I figured out, when zooming in or out, the mouse position was not updated correctly.

It made me wonder how it is possible that I didn’t notice this earlier, cause when placing buildings I used the same formulas !
I had to mess with some not cool formulas and I managed to get it working… Only on the leftmost point..

So on Thursday morning I fixed it once for all, now it works like a charm ! (Except it’s all broken if the resolution is not 1920×1080 but shhh)

Then during Thursday and Friday I setted up the rest of the Game User Interface.
I like the result but also the way I made it so let me explain it quickly !

The Structure User Interface is made of different modules, the first one just shows the structure name and the point position.
There is another one showing the inventory and a last one showing what you can build from the selected structure.

Each module scans the selected point for a structure, and gets the information it needs.
For the name it is quite easy. I can just call a function to get the structure ID.
For the other modules, they should show up only if the selected structure has the corresponding module.
Logcabins farms and campfires have an inventory so the inventory module should show up and access the current number of resources.

The campfire also offers the possibility to build new structures so the building menu should show up.
Those modules are represented as child nodes of each structure, so I can call GetNodeOrNull with the module name to know if the structure has it.

If so I can just call the functions I need.

I think it is a good example explaining how to use Godot Engine with or without C#. Each child can be considered as a module which is easily accessible with getNode.

I added the top part of the GUI with a save button and a debug button. 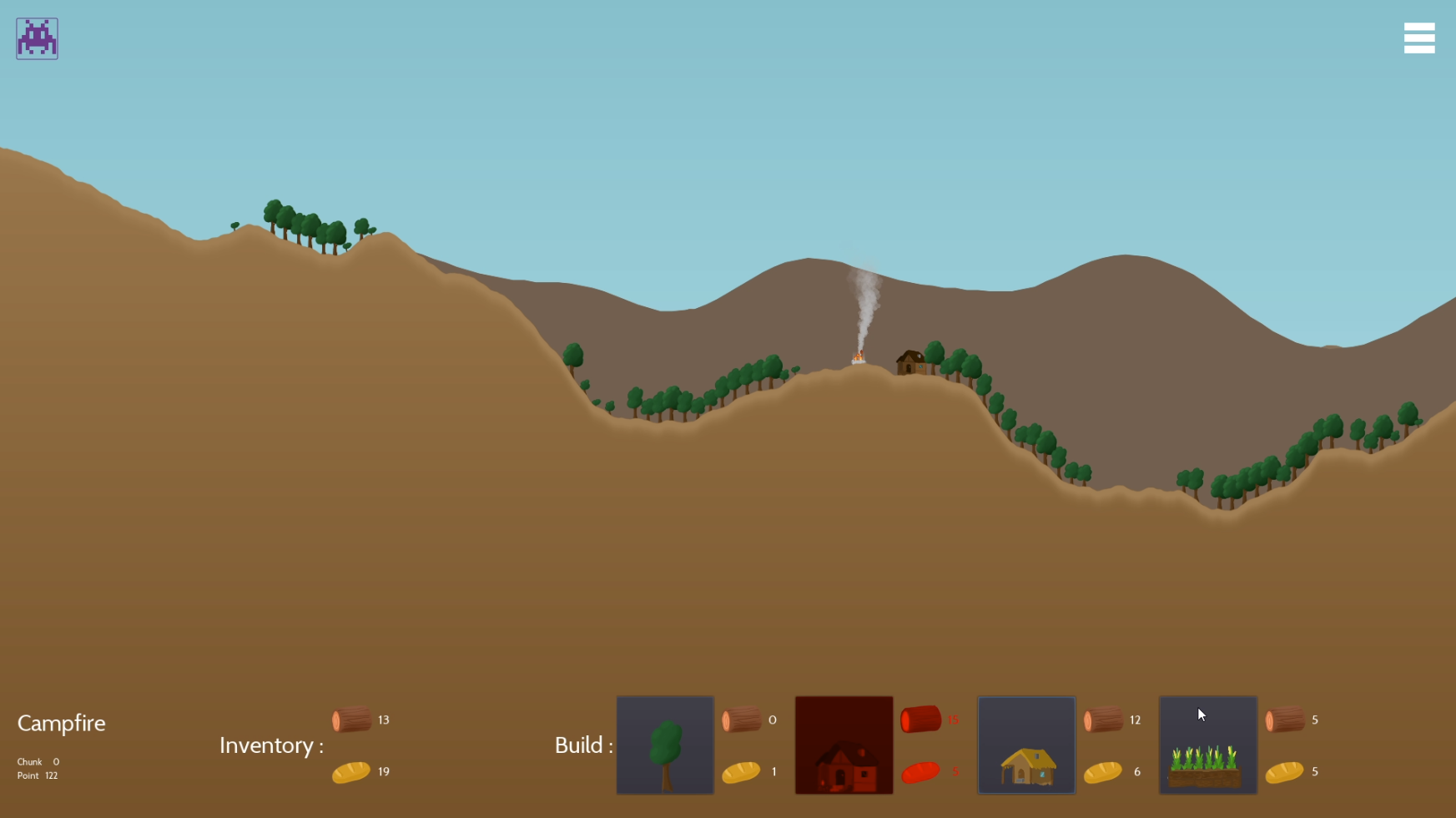 I finished this week by adding a blue cursor, I would like to bring different mouse cursors for when you inspect, build and so on.

I did some balancing too so when starting you have just enough resources to build your first necessary structures.

Next week I want to finish the 1.0 pre alpha version, I’ll focus on the structure placement part so you cannot build overlapping structures.

I have a ton of things I want to add for this first version so obviously I’ll have to select the most important ones, the choice will be rude !

Again thank you for the amazing support, join me on Discord and Twitch if you haven't already, I’ll give the game for free to the more involved ones there !

See you next week !

Join the community on our Discord Server

Follow my Twitch channel to join the stream sessions !