In this blog post we go through more technical stuff such as layering, collision detection and the engine in general. Also some nice screenshots!

While Pekka has been designing NPCs and the layout of the County Jail, I have been working on the core features of the game. I've completed first versions of the combat system, item handling and quest (job) system. I'm sure we're going to rework these features several times, but it's nice to have even rough versions up and running. Prisonscape is starting to come alive! As a side note, people from Reddit seemed to like the fact that you can taunt your opponent during combat. :)

We're currently working on getting the tile layers work with each other, so that transparencies and object rendering orders are correct. It's actually quite a bit of work to get them working properly, but once the system is done we don't have to touch it for the rest of the project. 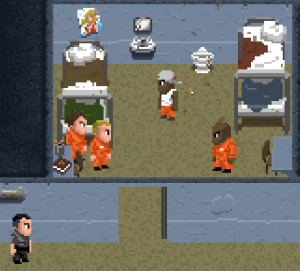 Layering in action - player character is standing behind the table

The reason we switched from working on core features to engine functionality is that we're trying to get our first gameplay video out. It will feature a simple quest, combat action, and in general show the 'world' of Prisonscape a bit. So, having working tile layers will be nice so that the player will actually disappear behind walls and items instead of climbing all over them. 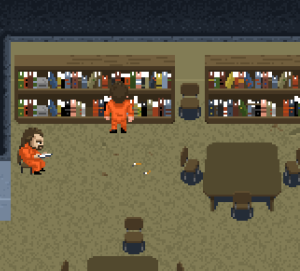 Checking if the Dance with The Dragons has finally arrived...

As for deadlines, we'll try to get the demo ready for September or October. I'm guesstimating that we will be working mostly on gameplay features this year with polishing and the rest of the engine work going to next year. There isn't much engine work left anyways, implementing OpenGL rendering and building an audio system basically. Making sure the game works as intended on our target platforms will also require time.

It's important to note that we're basically building Prisonscape from scratch, using a custom engine. I know we could have accelerated the development of Prisonscape by using Unity or some other existing engine, but I made the decision to use a custom engine based on few key reasons. Mainly, I like to have control over everything in the code. Having total control over code means that I can tweak every aspect of the game without waiting for a 3rd party. It also allows me to implement Pekka's ideas without ever going 'Nope, sorry, the engine can't do that'. We also won't be bound to any license fees or royalties. 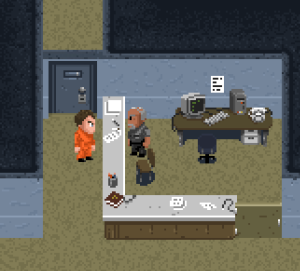 Even though custom development is slow in the beginning, we'll begin to see the advantages in the mid to late stages of the project. Also, we'll have a "production tested" code base which can be used in our next game. Anyways, Tommy Refenes (programmer of Super Meat Boy) had a nice blog post about this same issue at Gamasutra. He also seems to like the idea of custom engine development.

Well, this rambled on longer than I expected. Until next time!

On a final note: we have some incredible stuff coming up in the next month, so stay tuned for updates