This week’s update is about the different player and NPC units. There are three NPC factions with at least three different units each. This week we’ll look at the Tech Cult in particular!


We've categorized the units into classes: light, medium and heavy.Light units being fast, nimble, and lightly armoured, while heavies are slow and tough. Mediums being somewhere in between. This categorisation is very rough though, some factions are generally faster or more armoured then others.
Note that weapons and abilities are independent of vehicle class. A light unit will usually have less hardpoints to mount weapons on, but the weapons mounted may be the same as those on a heavy unit.


These tech- lovers see anyone not part of their cult as lower beings. They've sworn to collect, protect and exploit all technology on the world. These guys have fast units with low armour, but compensate with shield and firepower. They prefer lasers and technical devices over "primitive" equipment to get what they want. 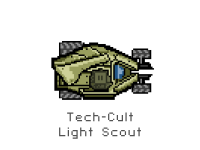 The first unit is a fast recon buggy. It has even less armour then other units in its class but makes it up with excellent manoeuvrability and firepower. It's often equipped with a shield generator which significantly increases its survivability against most conventional weapons. 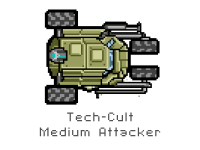 The medium tech unit is essentially the bigger, badder version of the light unit. It is perhaps the most technologically advanced unit in the tech-cult's arsenal. It too is equipped with a shield generator and is very fast for its class. It does have a lot less armour then comparable units of other factions however, so if one manages to pin it down, it will die fairly quickly. 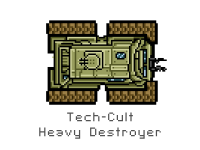 The heavy tech unit is somewhat out of line with the others. It is an older design and a lot less advanced then the other units. It has a huge amount of armour and is fairly slow, some don't even have a shield! They're however also equipped with heavy lasers and other tech, making them formidable enemies!

That's it for now. We'll have a look at the other factions, the Warrior Tribe and the Raiders, another time! Head over to our forum to join the discussion on the factions, classes and other topics!