Boo! Surprise release, this one making bot-hacking an even more unique play style with new RIF mechanics. Also a look at the biggest roguelike gathering of the year, and my talk at the event.

The Roguelike Celebration 2018, what an event... I missed version 2017, but was very happy to make it this year, and even had the opportunity to speak on something I've always wanted to give the community: A guide to getting into roguelike development.

How to Make a Roguelike turned into a pretty good talk, one that I spent dozens of hours putting together:

While I of course brought up many of my own projects, including Cogmind, a lot more of it covers other cool projects and serves as a general guide for how to get started.

Here I'm talking about the importance of having a core mechanic: 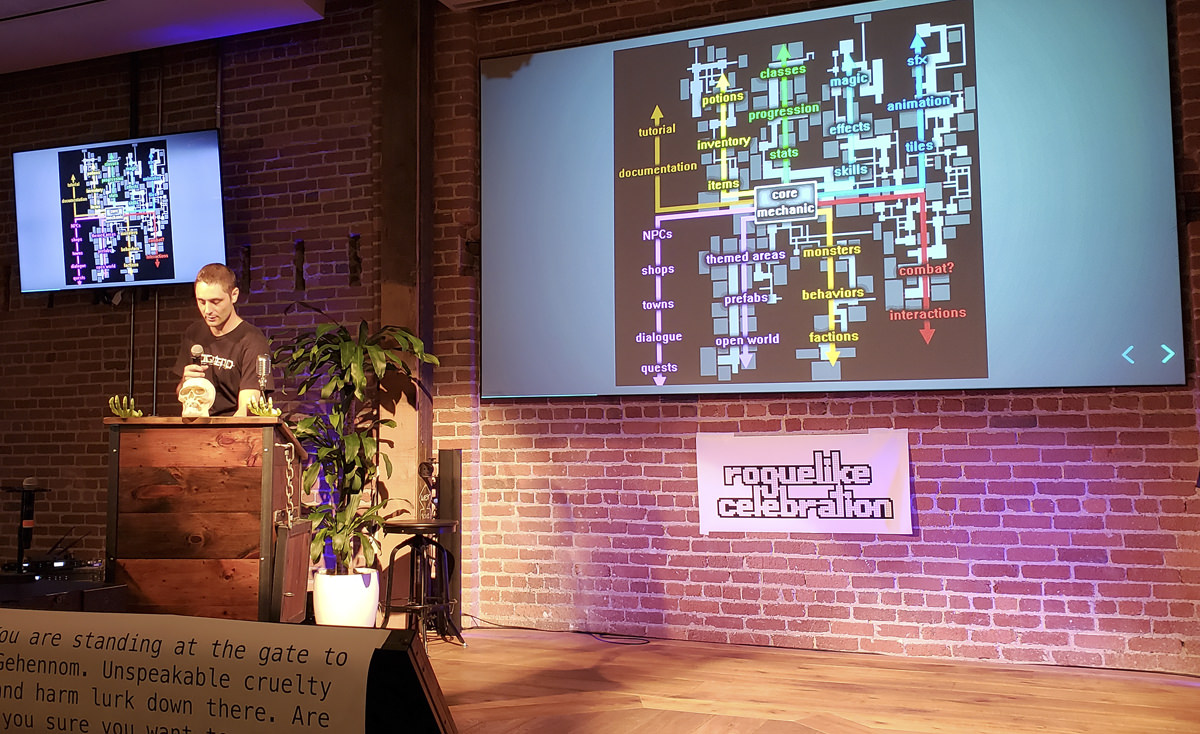 Just this week I also released a text version of How to Make a Roguelike, for those who would rather skim the 5,500 words and 84 images rather than watch me ramble through 27 minutes of cool roguelike stuff ;) 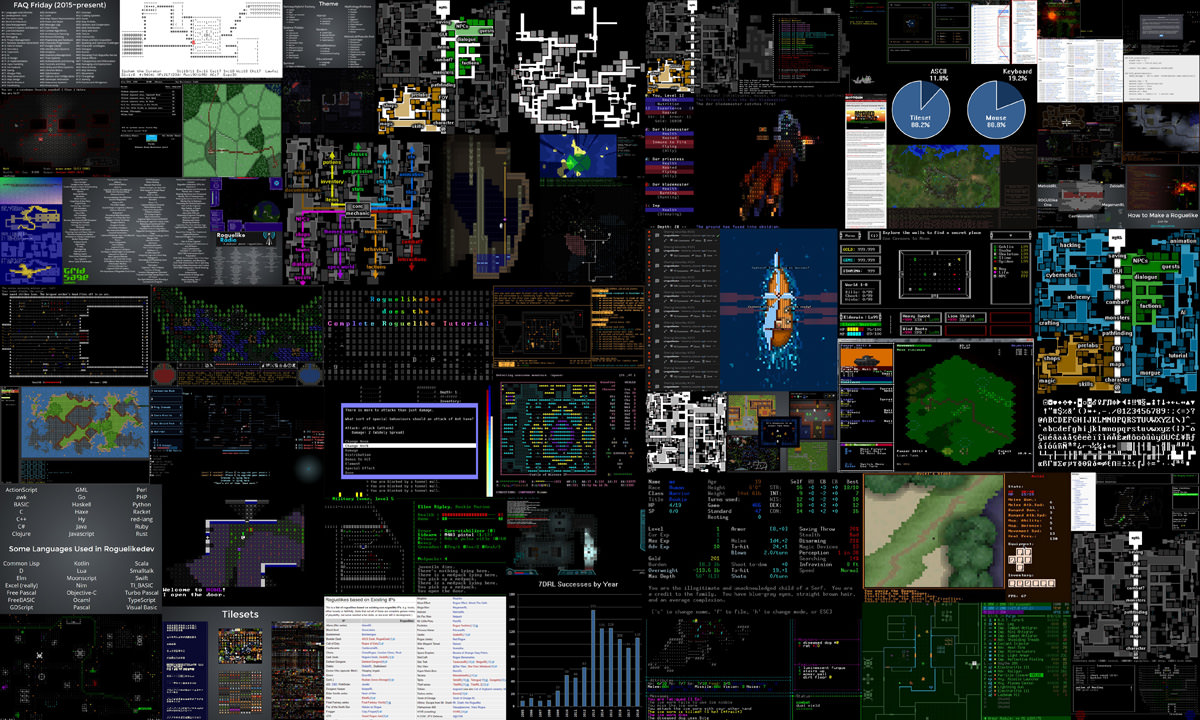 So that's what I've been up to for the past month, but about this new release...

Originally the next planned release was Beta 8, but 1) I already had a bunch of confirmed RIF features-to-be, 2) did the whole Roguelike Celebration trip which is going to push back the Beta 8 release date, and 3) really wanted to start streaming a new dedicated bot-hacking run and would prefer that it be fairly different from the one last month.

So early this week I suddenly decided to put out a quick 7.1 and give you all the RIF features now. Better than keeping them on hold for a bunch of other unrelated content, eh?

Beta 7.1 has technically been available since Tuesday, though we're just getting the release notes now. Let's see what's up...

The Relay Interface Framework was only just added in Beta 7, bringing with it dozens of new hacks to pave the way for new playstyles. But the initial design focus there was primarily to expand the robot hacking system, with only partial thematic integration with the rest of the world.

7.1 gives a RIF-installed Cogmind some new capabilities that really help highlight the fact that you sorta become part of Complex 0b10. Strategically speaking, the RIF buffs tie the framework even closer to alert management and Garrisons. RIFfing was already connected with these elements since hacking bots has no effect on alert at all and you can hack Operators to lower alert, plus you get Relay Couplers (and the initial RIF) from Garrisons themselves. But as you can see in the changelog there are now even more Garrison connections.

For one, you can now "sense" nearby Garrison Access points (essentially like Zion-integrated terminals when you're imprinted), and when you approach them the door automatically opens.

While inside a Garrison, you'll also no longer cause passive alert increases over time. As long as you can deal with the locals, Garrisons almost become a safe spot for you! This is doubly true once you have the RIF installed and can use couplers to take out bots relatively silently via hacking.

It's also easier to leave whenever you want to, since none of the Garrison exits will be remotely locked when you try to use them.

Outside Garrisons, one of the major new features is that with RIF you get the precise alert level updated in real-time! A new red entry appears on your HUD, as you can see at the top of this screenshot taken from my stream this week after raiding several Garrisons :P 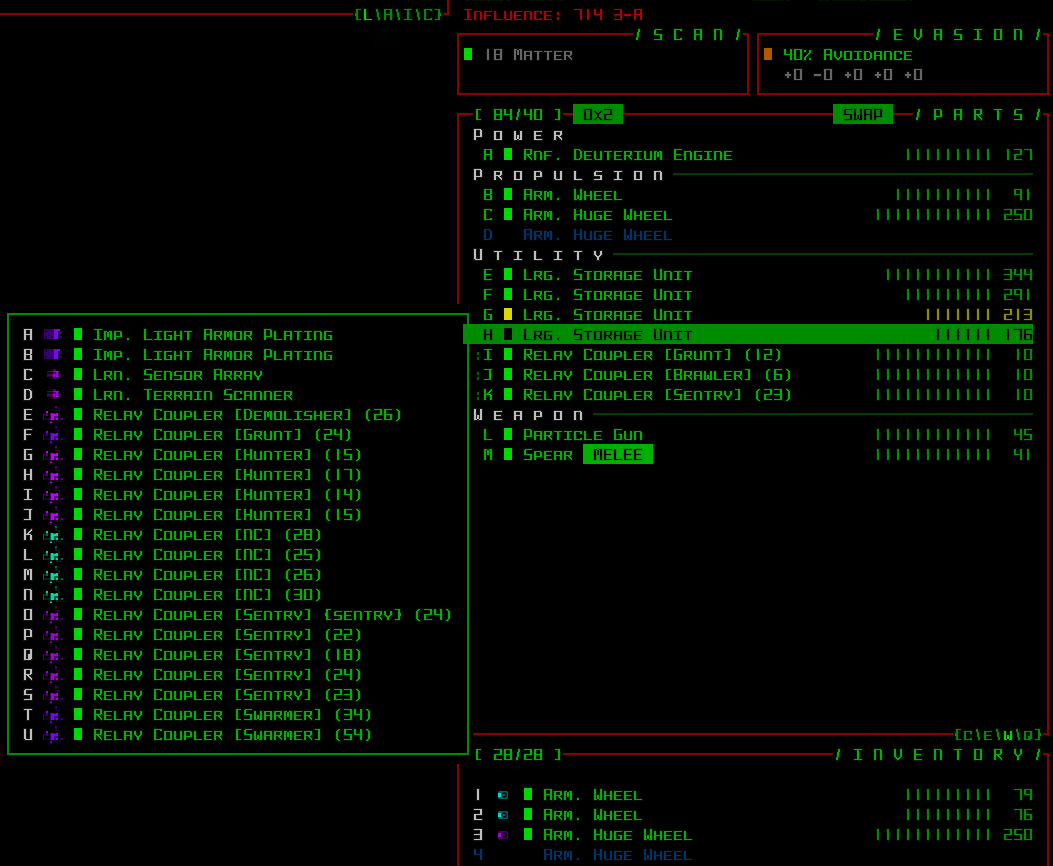 "Influence" is the specific number usually converted to a more understandable (and mechanically meaningful) alert level. You've always been able to see this mentioned in your scoresheet ("peak influence"), but this is the first time it's shown in game alongside the alert level conversion. Every action you take which affects it is reflected here. (I can smell the cheese now...)

Halving the cost of the purge_threat hack on Operators is yet another alert-optimizing buff for RIF users :D

Taken together, all these new mechanics could make RIF even more desirable for a number of hybrid builds, not to mention simply make pure bot-hackers much more reliable. Whole new strategies will be born from this.

Oh yeah, and by request the lone Garrison Access usually found on -8 is now forced to security level 1 so that RIF is that much more accessible early on (like other interactive machines at that depth it used to have a 15% chance to be SL2, which could be hard to hack open).

If you want to see how a pure RIF build is put together and deals with challenges, this week I started that new stream and it's been great so far:

There's a summary of the run here. Part 2 will be streamed next week.

But I Don't Wanna be Researched!

Another hacking-relevant issue to tend to was Researcher behavior, as they didn't much like you datajacking them or their friends, which is unnecessarily harsh if you're going to go through the trouble of using RIF over other strategic options that doing so closes off. So they'll now completely ignore datajack use and are fair game for manipulative hacks.

On a related note, non-hostile Researchers won't be alerted by nearby distress calls, which could similarly have pretty disastrous consequences when a Researcher just sitting behind a wall suddenly pops out and scans you without warning.

Weapon cycling is the main related UI feature that got an overhaul (the partial implementation included with Beta 7 was apparently broken anyway). For Beta 7 Remote Datajacks became solo-fire weapons, so there was a greater need for the weapon cycling command/button to do something other than simply toggle everything off and on. Now it'll actually cycle through projectile, guided, datajack, and melee weapons, also treating each datajack and melee weapon as a separate option.

There were a number of other things in recent weeks I've told people are coming "next release," but note that means the major release that will be Beta 8, not this little surprise release xD. I did include a number of fixes with 7.1, stuff that I just happened to have already done, but there's still plenty more on the docket, as well as a backlog of other feature requests and basically tons of stuff to do overall!

Beta 7.1 saves are not compatible with previous versions, but even if you're on Steam and have autoupdates enabled, Beta 7 is still available via its own legacy branch and you can roll back to finish a run in progress first if you like.