How the character of Clark evolved over time. From early sketches to rigged and textured lowpoly 3d model.

The Genesis of Clark [the in-game model]

THE BEGINNING: When we started to design this game, we had a fairly simple robots-in-a-maze-fight-each-other (PvP) idea, so the very first attempts at designing the characters were much less peacful than the little guy Clark eventually turned out to be.

INSPIRATION: Pretty quickly we figured out that our first dip into the waters of game design shouldn't be yet another shooter, but rather a puzzle game. We came up with a clumsy robotic lead character, fond of boxes. Believe us or not, we didn't think of WALL·E. Not yet. First, we searched for photos of old construction site machinery. A little bit of forklift from the 60s here, some steam-punky pistons there, and the first designs of Clark's upper half already started to look promising. 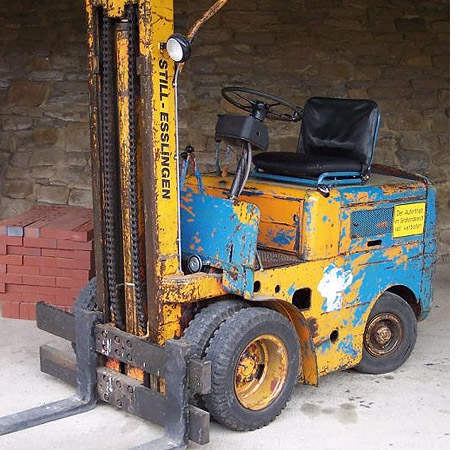 GAMEPLAY CONSTRAINTS: The lower part, which is connected by a vertical pivot to allow turning of the upper body independently from the base, was much trickier. To simplify CLARK's controls and keep the gameplay straightforward, it was extremely important for us to stick to our original grid-based framework. For our avatar this had one huge implication: To give the player the necessary degree of mobility, he had to be able to move straight or sideways without an intermediate turning-motion, aswell as turning in a crane-like fashion while holding an object. These constraints left little room for any wheel-based designs. Hovercraft solutions were also quickly tossed into the bin. Therefore we reinvestigated the old symmetrical four-legged base design still left over from the machine gun robot. Now with the legs he had all the maneuverability needed, but the insectoid look seemed slightly problematic, especially because there wasn't really anything loveable to Clark, yet. 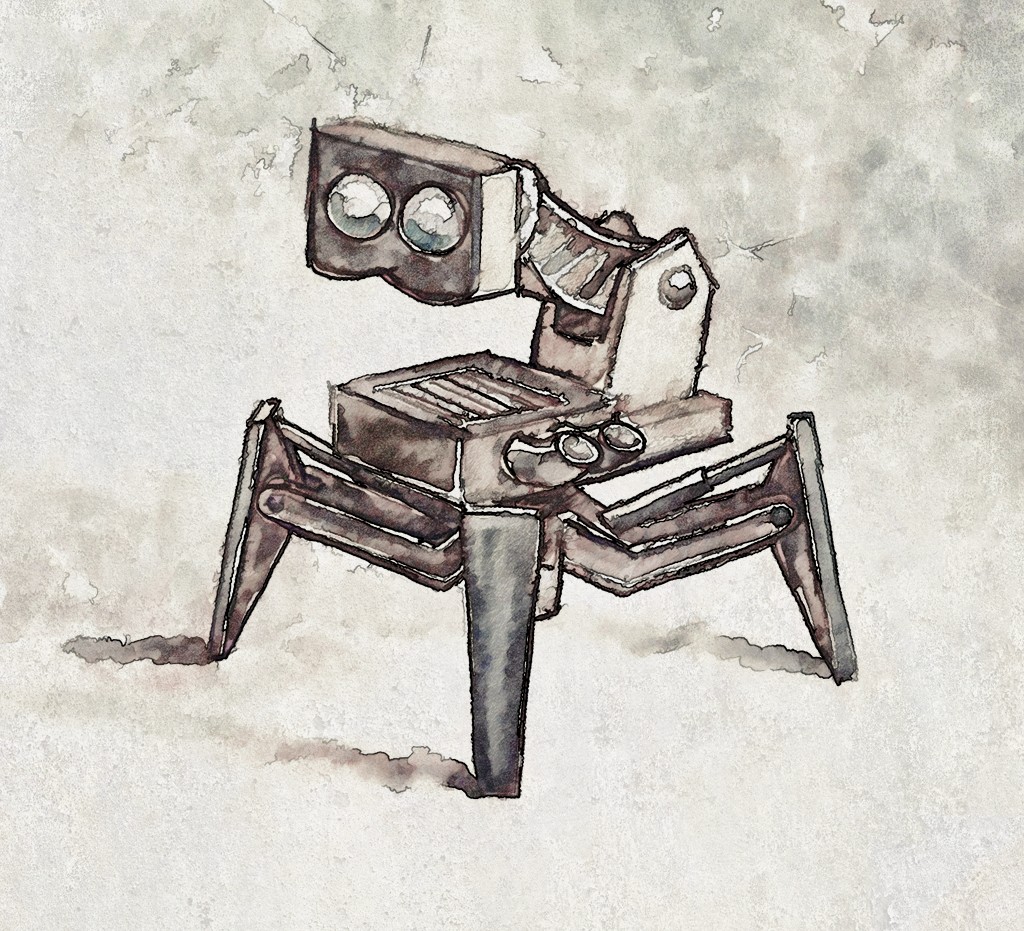 GETTING HIM CUTER: At that time, his head alone sent arachnophobics screaming and hiding behind pizza boxes in our office (I'm exaggerating, we rarely ate pizza. Also, back then "the office" was just my living room.) So we realized we not only had to make the legs more robotic, but also to do some serious redesign of the upper half of Clark.
He should be cute and catch the player's heart, without needing a lot of moving features such as eyebrows, lids or lips. I turned the whole orientation of his neck around and slapped on some oversized, slightly sad-looking eyes. The head was given a triangular shape to fit into the scheme of childlike characteristics. Finally I added a bolt for an abstract mouth. The huge "eyes" not only gave the character an emotional believeability, but also served to explain the tractor beam Clark is emitting when lifting objects. As a general rule, we wanted to have all faces on our game characters to have mechanical, robotic features, abstractly resembling human characteristics, without merely rebuilding eyelashes mouths ect. 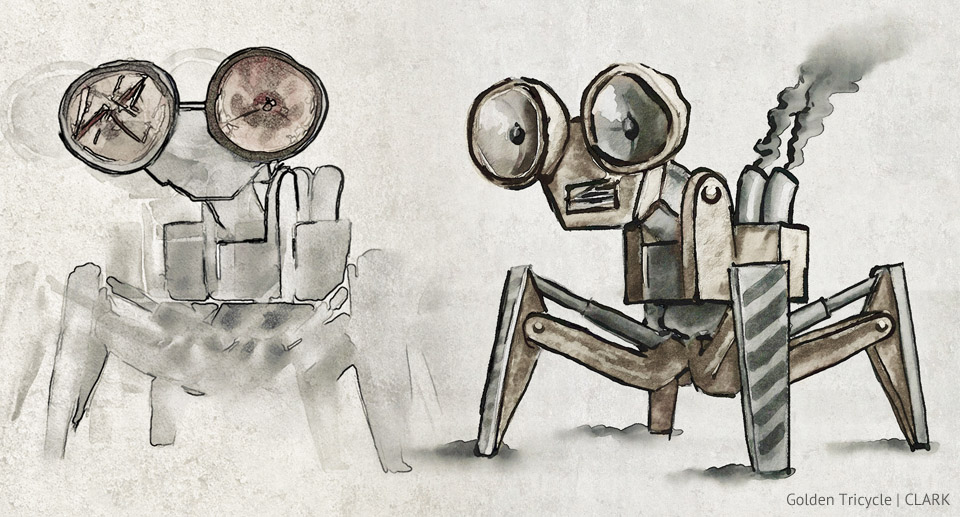 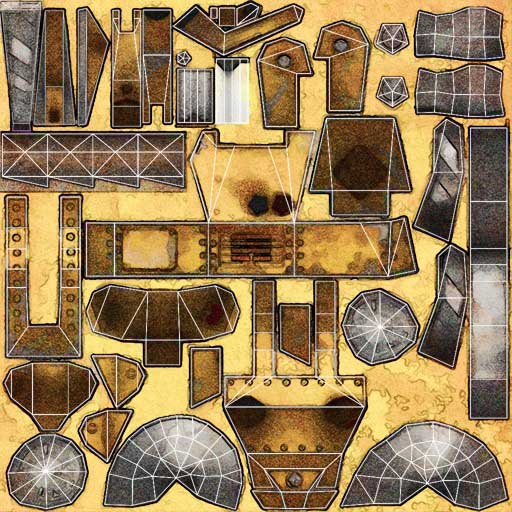 MODELING, TEXTURING AND RIGGING: The next step was to build a low-poly model which was quite a challenge for I had until then worked only on highres architectural visualizations which had serveral hours time to calculate. Getting my renderings to finish in 1/60 of a second for realtime on a mobile device was a whole new task for me.

After I managed building it (the final version has a little more than 400 vertices) I layed out the UVs on a 512x512 map and gave it it way too many details that all got lost in the later filtering of the texture (argh!). Rigging the character was again something I didn't have the faintest clue about. Intimidating at first, it turned out to be less scary than expected and with the help of a few mechanical rigging tutorials, I found my way through the process rather quickly. Eventhough Cinema 4D is never used for any feature film character animation, it does have a lot of useful rigging and animation tools which came in pretty handy and made it easy jump right into it. After the first walkcycle attempts, I took the time to produce a first little clip featuring Clark and a red ball. Man, I felt like Pixar.

IMPORT: Since Unity obviously doesn't support Cinema's constraint system, let alone any custom script (hell, yeah: I wrote one!) it couldn't just directly open the .c4d-file which would have been like the most convenient thing in the world. Instead, I had to bake every frame of the animated Clark character, which at first didn't work at all. Fortunately I found a good and cheap plugin (Nitrobake) to take care of the issue, so in the end the huge baked file was being imported into Unity and we saw Clark walk in-game for the first time.

If you have any questions about the process, feel free to ask. C&C is always welcome.