Come learn about the ridiculously epic Hamon, Heaven's Butcher, an upcoming champion in the new MOBA game Circuits and Shields. Hamon features never before seen mechanics and a gripping backstory that plays a large role in the universe of Circuits.

See the full article at: Circuitsandshields.com

Hamon is one of the most unique characters in Circuits, let alone any MOBA. Not only does Hamon serve a massive purpose in terms of lore and story development, Hamon also has a brand new mechanic we call "Equilibrium." Rather than using mana, energy, rage, etc., Hamon is able to switch axes on the fly. As Hamon attacks with a specific axe, his equilibrium bar shifts toward that axe's direction. Based on the position of his current equilibrium state, Hamon gains access to new abilities, completely changing the play style of his character. Players will have to utilize both the Human and Corrupted forms of Hamon, juggling between forms to use Hamon to his full potential. We'll release the full details on Hamon's abilities in a later post, but we promise it is one of the most dynamic, interactive champions ever seen before in a MOBA.

Hamon's backstory is also crucial to the entire Circuits story. Of course, we wouldn't spoil the whole story in one character, but Hamon's story provides a small glimpse into the past and shows that maybe the Avos aren't everything they seem. Hamon's journey to his current state of clashing personalities inside of him is one full of interesting twists and detail. You can find Hamon's full story below.

We look forward to releasing more information on Hamon as he's one of our personal favorites. We hope you enjoy his story and mechanics as much we do! 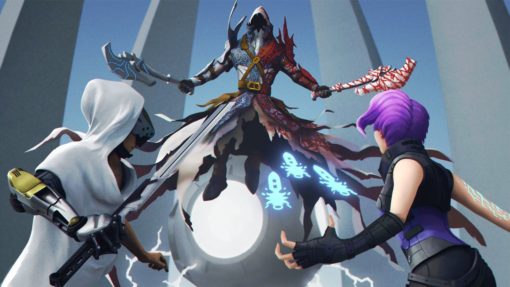 Hamon could almost remember the times before the endless battle. With each swing of his axe he glimpsed it; the spectre of a face, a small girl with almond eyes and a smile as bright as the morning sun. A girl he knew but at the same time couldn’t recognize. His heart ached for the forgotten, to find meaning in the visions. But those flickerings of memories vanished in an instant, replaced instead with the taste of blood and the cheers of the crowd, “BUTCHER! BUTCHER! BUTCHER!”

You would think by his title that he reveled in the spilling of blood, but that has not always been the truth. Hamon once resented the slaughter, despite his natural gift for it. He once fought for the salvation of his home, fighting because he believed it would mean protection and security for his daughter back home, a cause Hamon would surely sacrifice his life for. However, now home was but a distant memory, and while his new cause lacked any form of righteousness in his eyes, he found his mind unable to question it.

How does a man like Hamon, a man concerned solely with saving his world, become a man known as the butcher?

You see, Hamon did not lose. So determined and convinced that his fighting would mean salvation, Hamon never suffered a defeat. The Avos took notice of his conviction, abusing it by offering him power he believed would make his dream of safety for his family possible and finally allow him to return home. Hamon accepted his reward, blind to the actuality of their plan, power now seeping through his veins like a tidal wave, twisting him, breaking him, warping him into something far more divine, far more brutal. Where there was once was a man, there was now… something else.

Hamon became an Arbiter of the Avos, enforcing their will throughout the expanse of worlds. He carried out his commands with such brutality, his demonstrations became a warning to the fate of all those who challenged them. Though the Avos told him their cause was just and for the greater good, Hamon didn’t believe them, but he didn’t need to. As centuries of time passed, Hamon lost all memory of who he was before his ascension, leaving only brief and distorted glimpses of the almond eyes in his mind. He devolved into a mad dog, killing not to fulfill any command but to satisfy his own blood lust. He crossed the stars, leaving a trail of death behind him.

Recalled from his sprees back to the arena to preside over the tournament, Hamon expected his command to be the same as it always has been, carnage. However, during early proceedings, Hamon eyes caught the sight of a proud human warrior entering the arena. Suddenly, memories of his prior life began coursing through his blood-maddened veins; memories of people he once loved, his humble cottage nestled near the quiet stream of his village, and the little girl with almond eyes looking at up at him surrounded by the warmth of the morning sun.

In a moment of clarity, Hamon was able to identify and gather the small amount of humanity left in his bones, all at once splitting himself into two sides, forging that humanity into one of his axes. This axe became a conduit to channel the man he once was, a tool that Hamon named “Justice”, forged to fight for redemption and atonement of his crimes. While Hamon knew he would never fully rid himself of the corruption that had laid inside of him for so long, he would use this to his advantage, allowing that power to course into his other Axe, one he would aptly name “Cruelty”.
Hamon now fights once again in hopes of fully recalling his purpose and identity, to once again become the loving father and proud warrior he once was. He fights to bring about an equilibrium inside himself and to bring peace to the raging voices inside his mind. Until then, Hamon’s pursuit of Justice will be unrelenting until he ensures the mistakes he made and the pain he endured will never be thrust upon another. And when he meets those deserving of this Justice, they will not find an empathetic man of mercy, they will find the Cruelty of a man truly deserving of the title “Heaven’s Butcher” 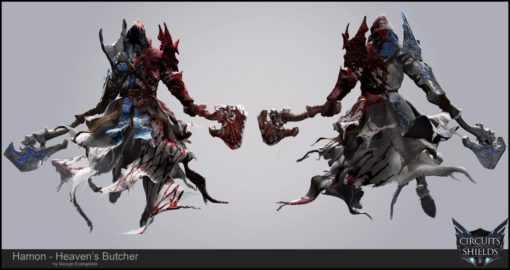