Welcome back to another Verdun Community Development Update. This week we have a great announcement and tons of content to show!

The test build for the upcoming content update is now available for selected testers! In the coming weeks we will trial the massive content and all its aspects (including gore, new artillery abilities, flamethrowers, 73 weapons and more) with the community. If you are reading this and think, “I would like to join as well!”, look no further. You can sign up for the testing group here.

Upon joining the test group, you will be able to give feedback and receive a key for the Verdun testing application. You will be able to keep having the regular verdun client installed side-by-side. So what is in this update? The past months we have teased quite a lot, but there is still so much more to show:

This week we’ll also be revealing a little more info about the upcoming map titled “Champagne”. This map is based on the champagne front. A somewhat forgotten front, it saw major fighting in both 1915 and in the final offensive of 1918 which saw a major U.S breakthrough. The frontline is situated between Reims and the Argonne and consists mainly of open farmlands and hills. Many of these hills such as the “Main de Massiges” (“The hand of massages”) were heavily fortified. Combined with the fact that the front was largely static between 1916 and 1917, Champagne serves as inspiration for a totally different style of map which is entirely centered around the fighting within the complex lines of trenches. This should really contrast with the other maps where large portions of the fighting takes place in or around nomansland. Another iconic element which has been added to the game through Champagne is also that of night fighting.Our level designer has created some of our most stunningly realistic trenches in this new map, that really should do justice to the extensive and chaotic trench networks that could be found on the western front. Take a look at these teaser images (which also incorporate some of the upcoming new squad types) 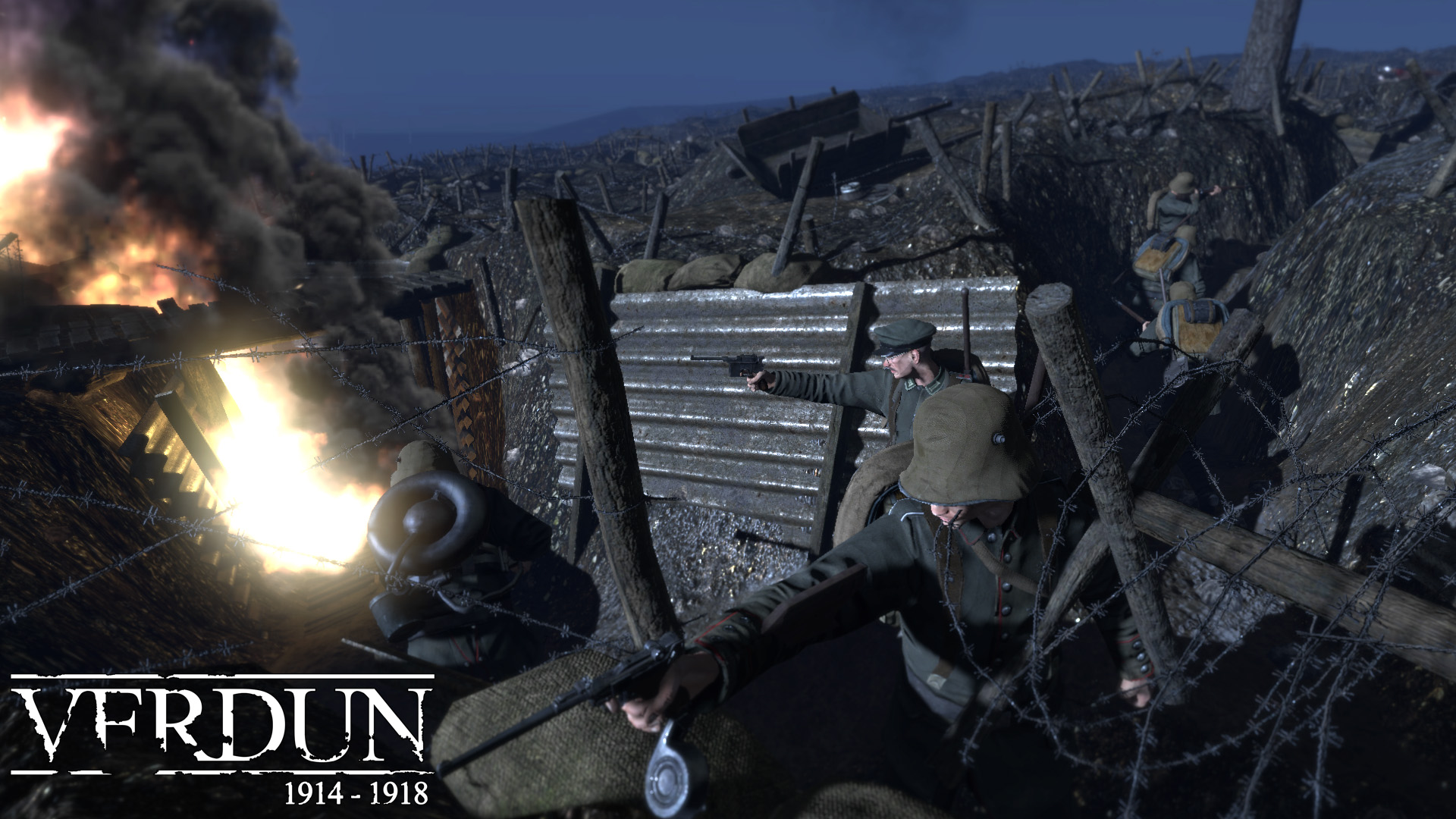 “German "Pionier" squad conducting a night raid on the champagne front using a flamethrower. Note the entrenching tools carried by the pioneers as well as their distinctive canvas-covered stahlhelm. Also in the image is a soldier wielding the artillery luger (with 32-round drum magazine) The ‘Pionier’ class officer is using a C96 pistol for this raid” 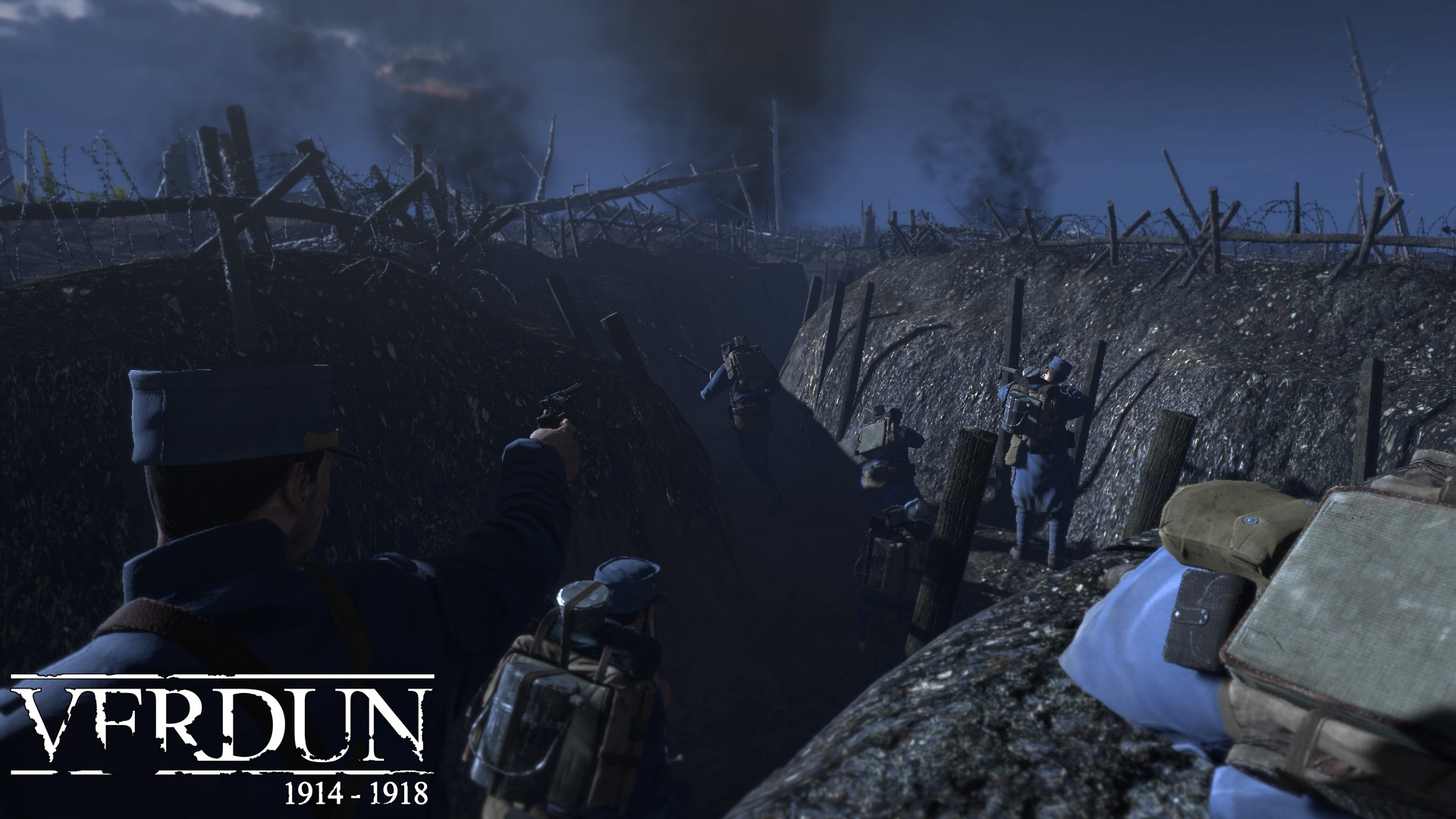 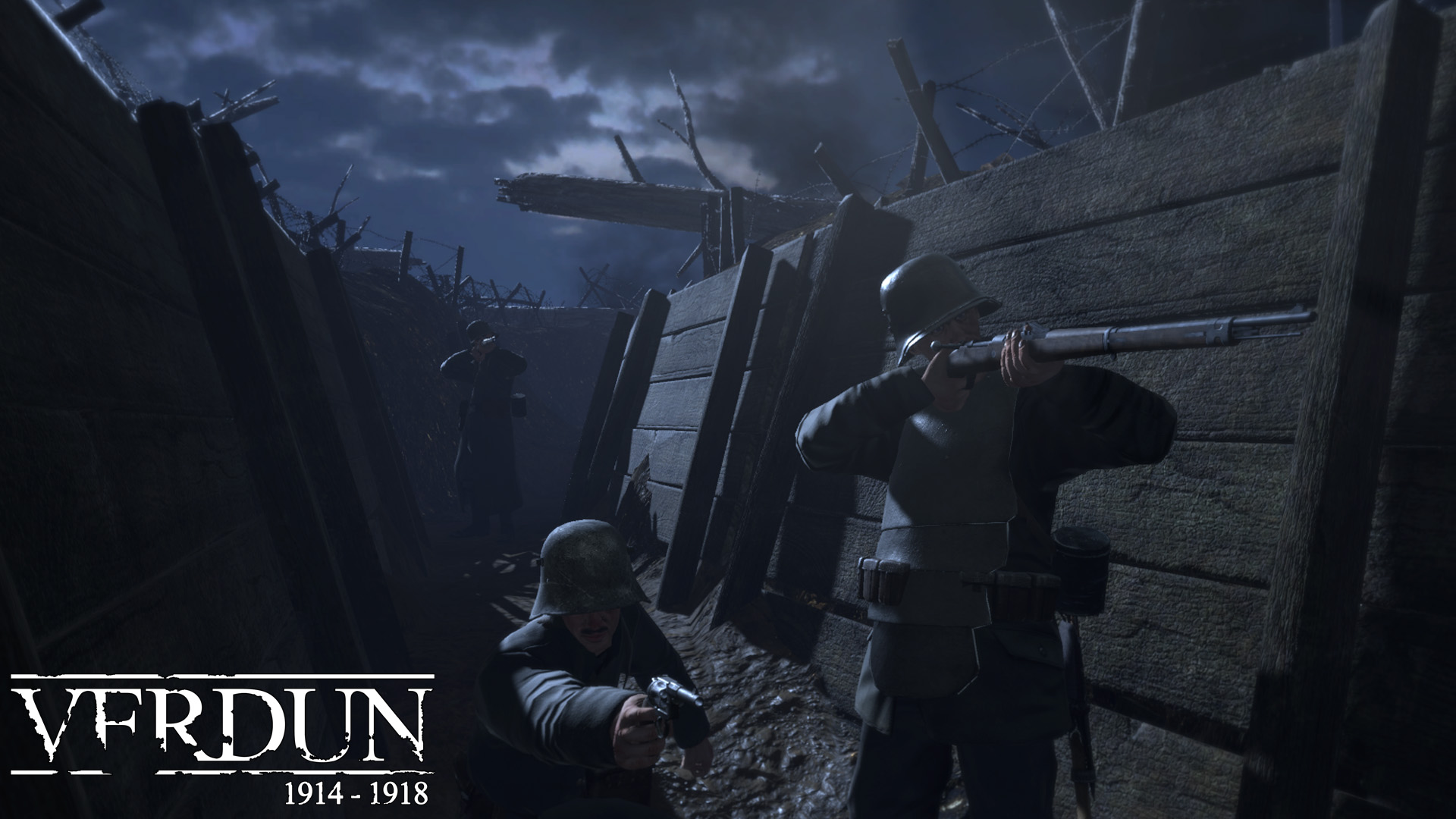 We’d also like to introduce images of the new U.S squads in-game for the first time. 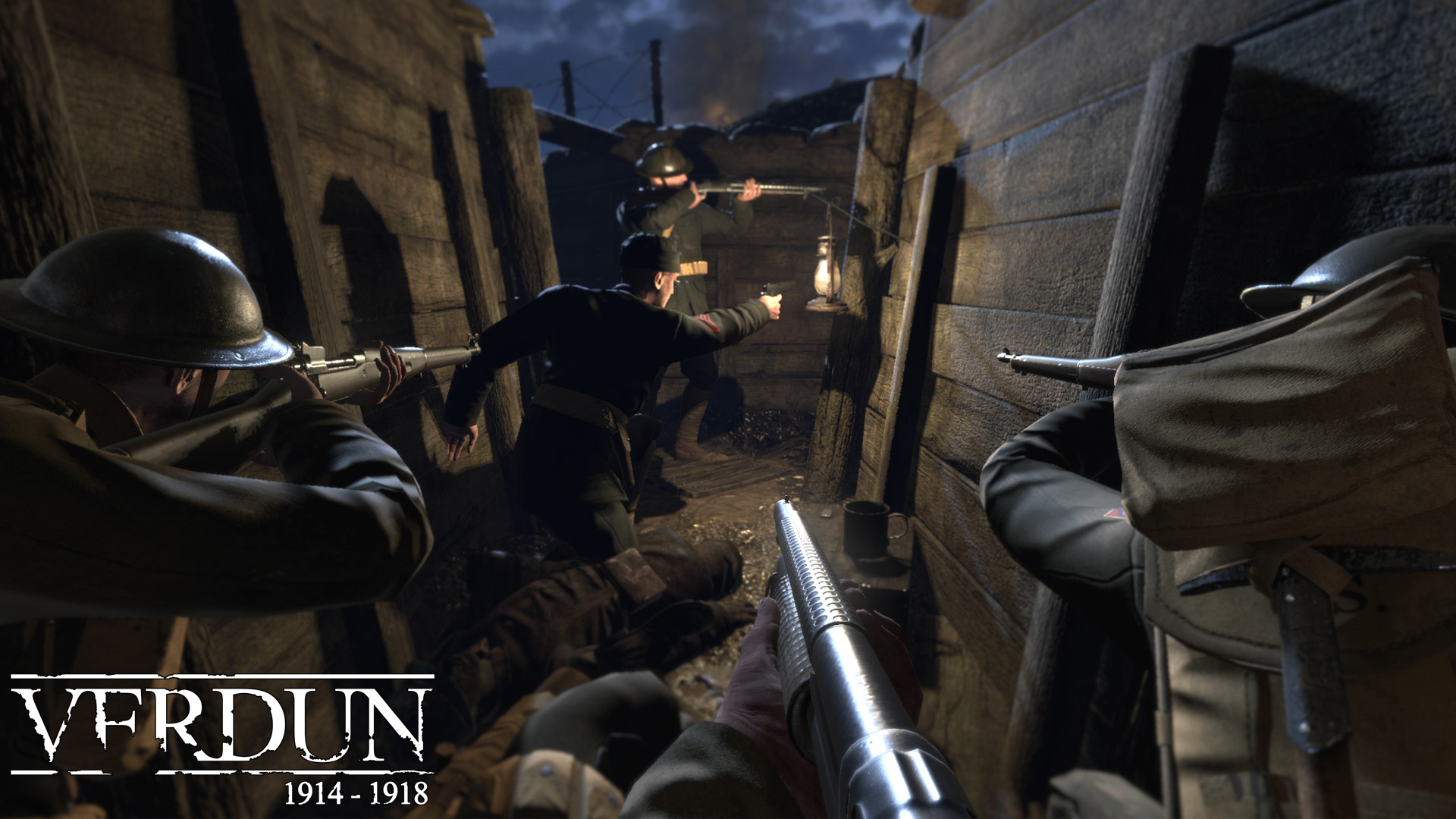 “U.S Doughboys and elements of Marines on a combined operation in the Champagne region. Known as the battle of “Blanc Mont Ridge” in October of 1918. Most obvious is the presence of the iconic M1897 winchester “Trench Gun”. A feared and most deadly weapon in the close proximity of the trenches in Champagne.” 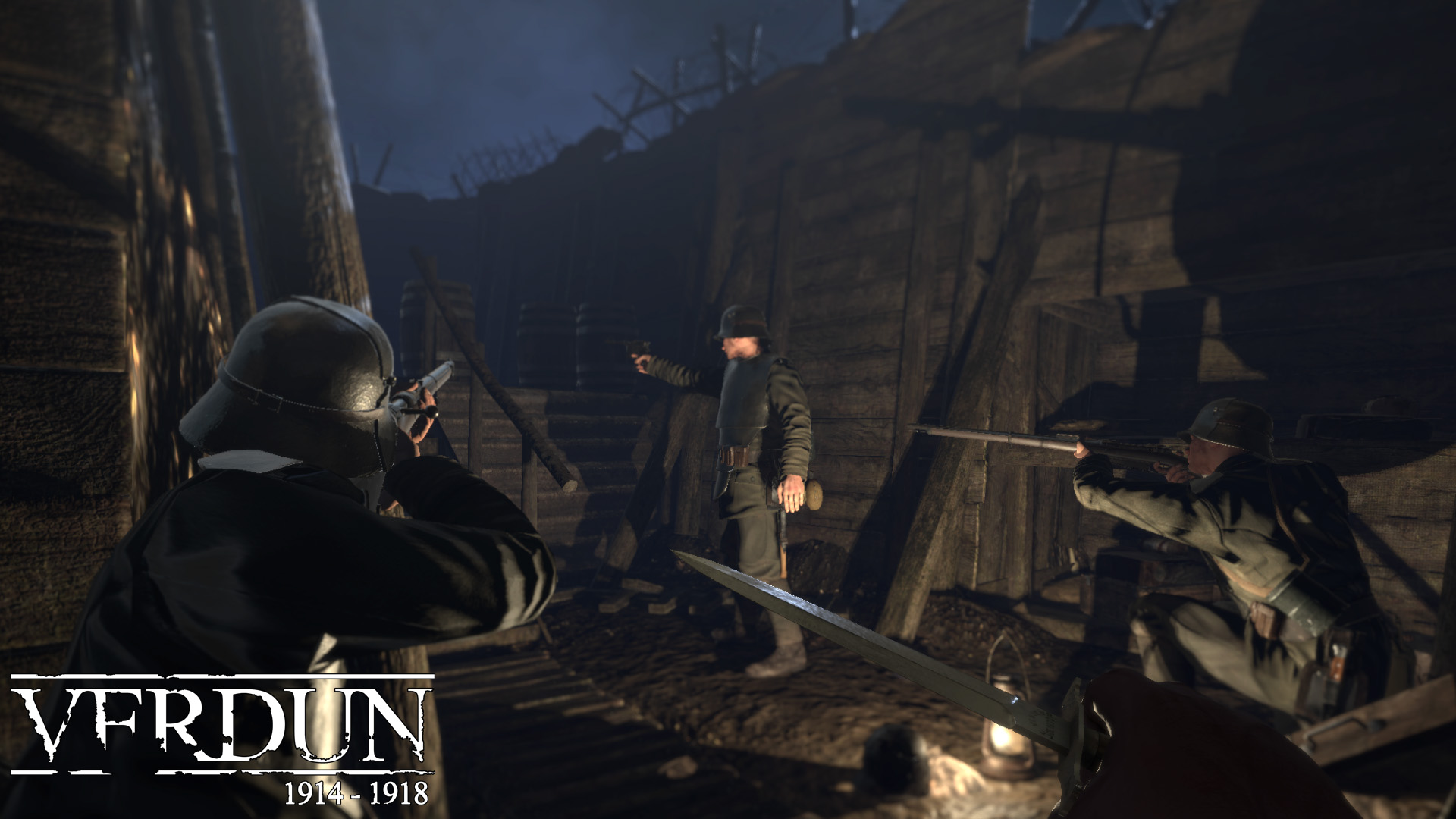 “Outflanking a group of German sentries, Champagne 1918. The new map allows for tense close quarters combat, and thanks to a less-linear design of trench lines it becomes possible to surprise defenders and attackers by attacking from unexpected corners.”

New in the upcoming update is also animated extraction of the empty cartridges.

New Gasmask: The Small Box Respirator Last week we introduced the new first person animations for the French gasmask, the M2. This week we can show you the newly added SBR (Small Box Respirator). It has a distinctive tube and comprises of two main components, the mask and the box filter - usually carried in a bag and placed on the chest.

The U.S didn’t have much in the way of a lightweight machine gun come 1917, so when it entered the war, the U.S forces were issued with French Chauchat LMGs. The U.S later developed the m1918 due to a series of issues that were commonly faced by soldiers within the front lines. Primarily, the open sided magazine (which had been a major issue for French soldiers in the mud of the trenches) was replaced with a boxed magazine and a conversion to accept .30-06 rounds. The M1918 will be used by U.S marine squad by the close combat support role. The .30-06 round gives a slightly different performance from the french m1915 chauchat. The fact that it was frequently ditched by troops in the field because of jamming will be reflected in the fire rate of the weapon. 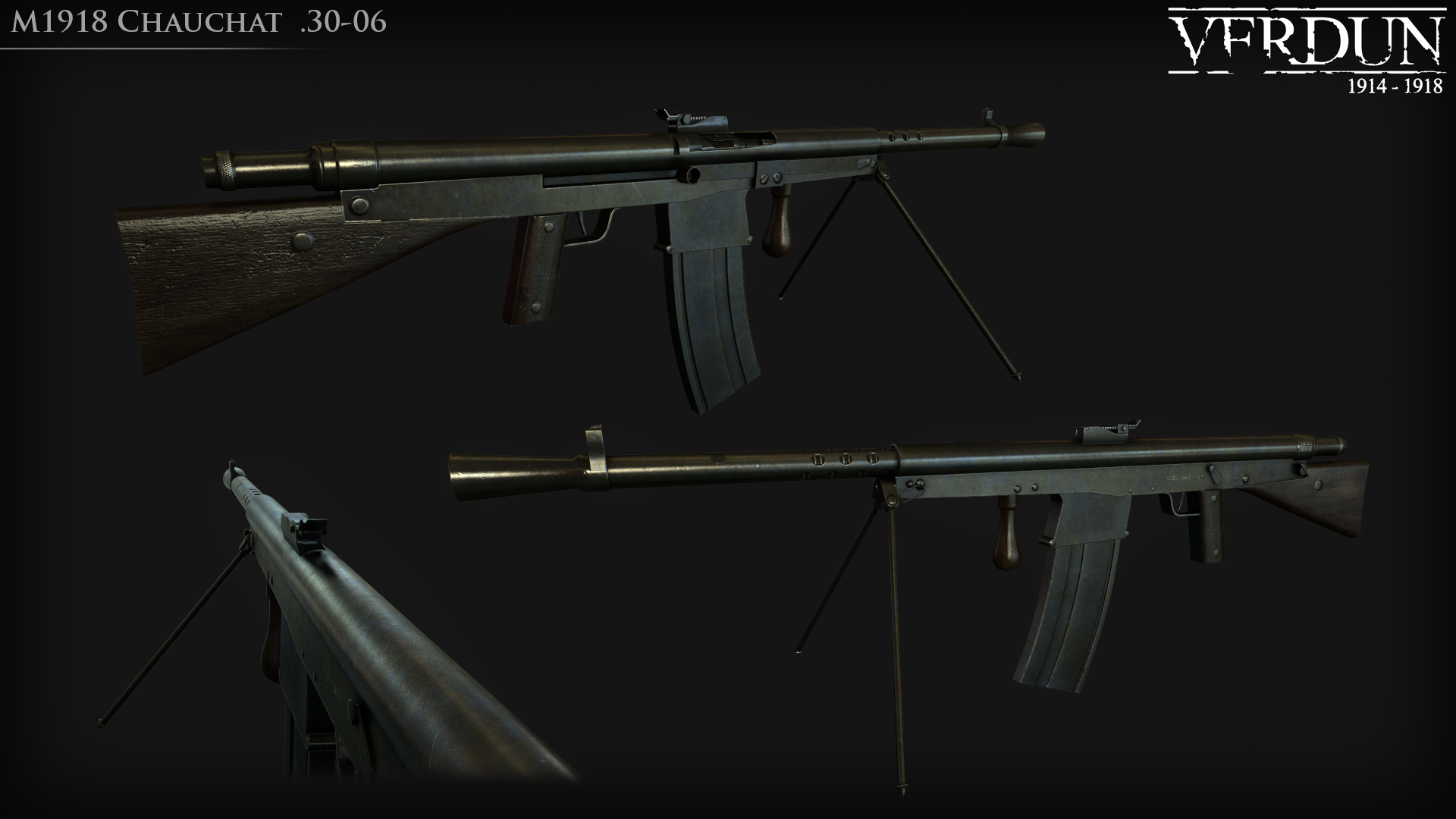 he German Wechselapparat Flamethrower or ‘wex’ was developed in 1917 after successful but outdated Kleif flamethrower. Flamethrowers had seen use since the early years of the war, one of the first recorded uses being during 1915 near Verdun. As the war progressed flamethrowers grew in complexity as well as size - including the famous british Livens flamethrower. Come 1917 the Germans were in need of a lighter weight, more adaptable flame thrower - capable of being handles by one or two crew members. The ‘wex’ saw effective use in 1917/18 and was the basis for a number of flamethrowers including the Model 40 German flamethrower and portable No 2 British flamethrower in WW2. 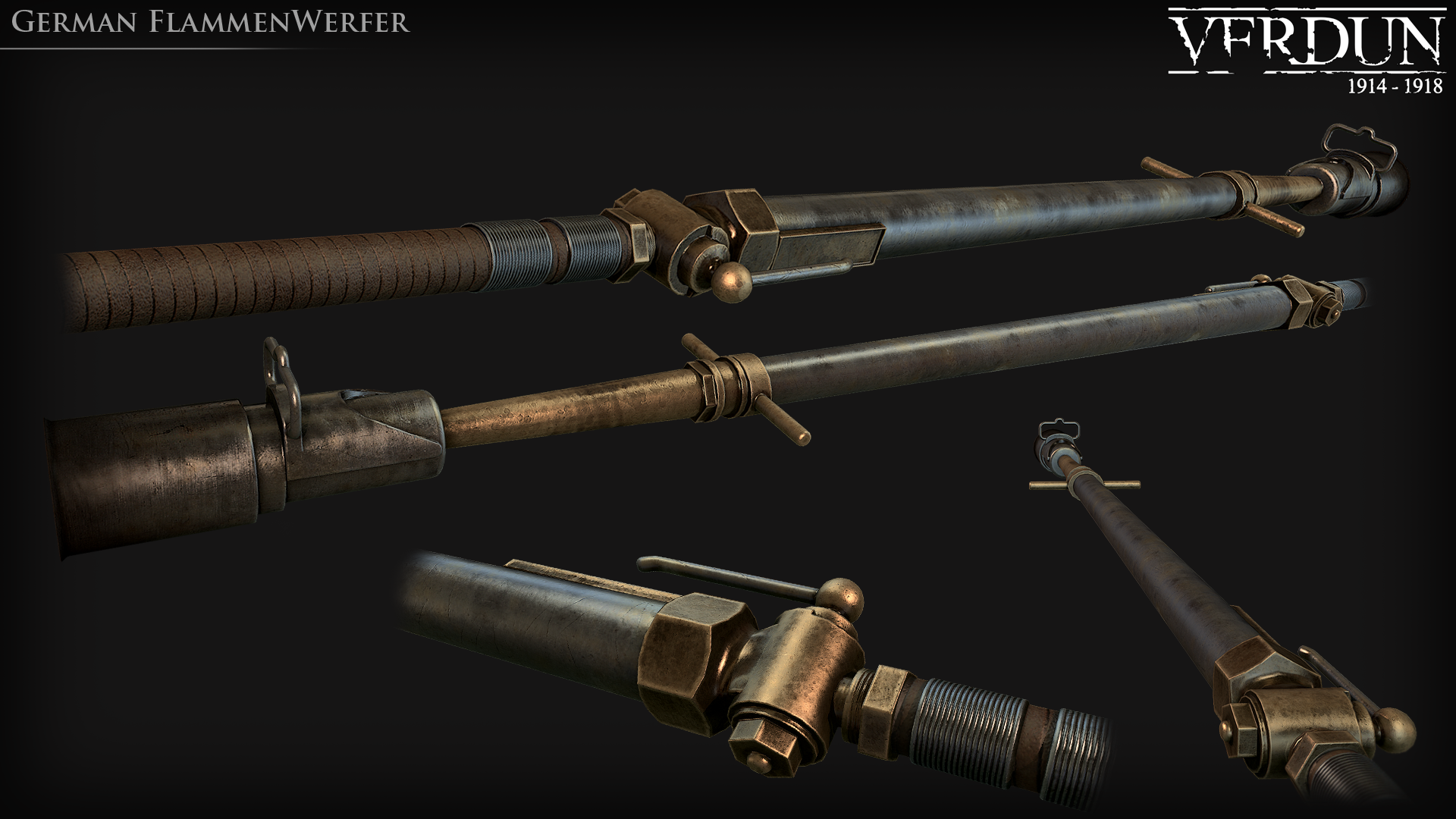 The Wex will be used by German pioneer troops to counter the U.S marine squads. With limited range and fuel capacity, the wex will be a tricky weapon to master… however given the correct handler, it could quite possibly be the deadliest weapon to see action on the fronts of Verdun.

The C96 also received a great reloading animation of its stripper clip. This is just one of the many items you will be able to try in the test version.

The C96 cannot be reloaded mid-clip Some animation improvements have been done, last week we already saw the bullet extraction (though heavily a WIP).

This week we show some of the many new reload animations.

Now we’d like to tease some of the new features that have kept us busy. For a starters we have redone ALL the animations for all the first person weapons. Also weapon sights have been edited and they look a lot more immersive, for instance in this image:

We also updated FP gas masks and added the allied French and British/American masks as first person models (No more German gas masks for all nations!) Here is a little teaser of the M2 mask:

As a bonus little for the 24 hour update delay we’d like to demonstrate an awesome new feature that we are currently working on as part of the gore system: Updated Ragdoll physics/animation hybrids. Gore will be part of the upcoming content update testing phase. Some elements have been polished since our initial trials in October and it is now ready to test again.

Seamless blending between animation and ragdoll

Next time we shall reveal more features and some animated gifs of the verdun gore system (dismemberment being one of them) In addition to the new weapons and animations, Unity 5.3 allows for a new kind of Physically Based Rendering technique which allows for a nicer representation of metals in-game. Our artists have worked tirelessly since new years to update weapon materials (as was as working on all of the other things). Here an example of some of the new material work.

The ruby was also reworked 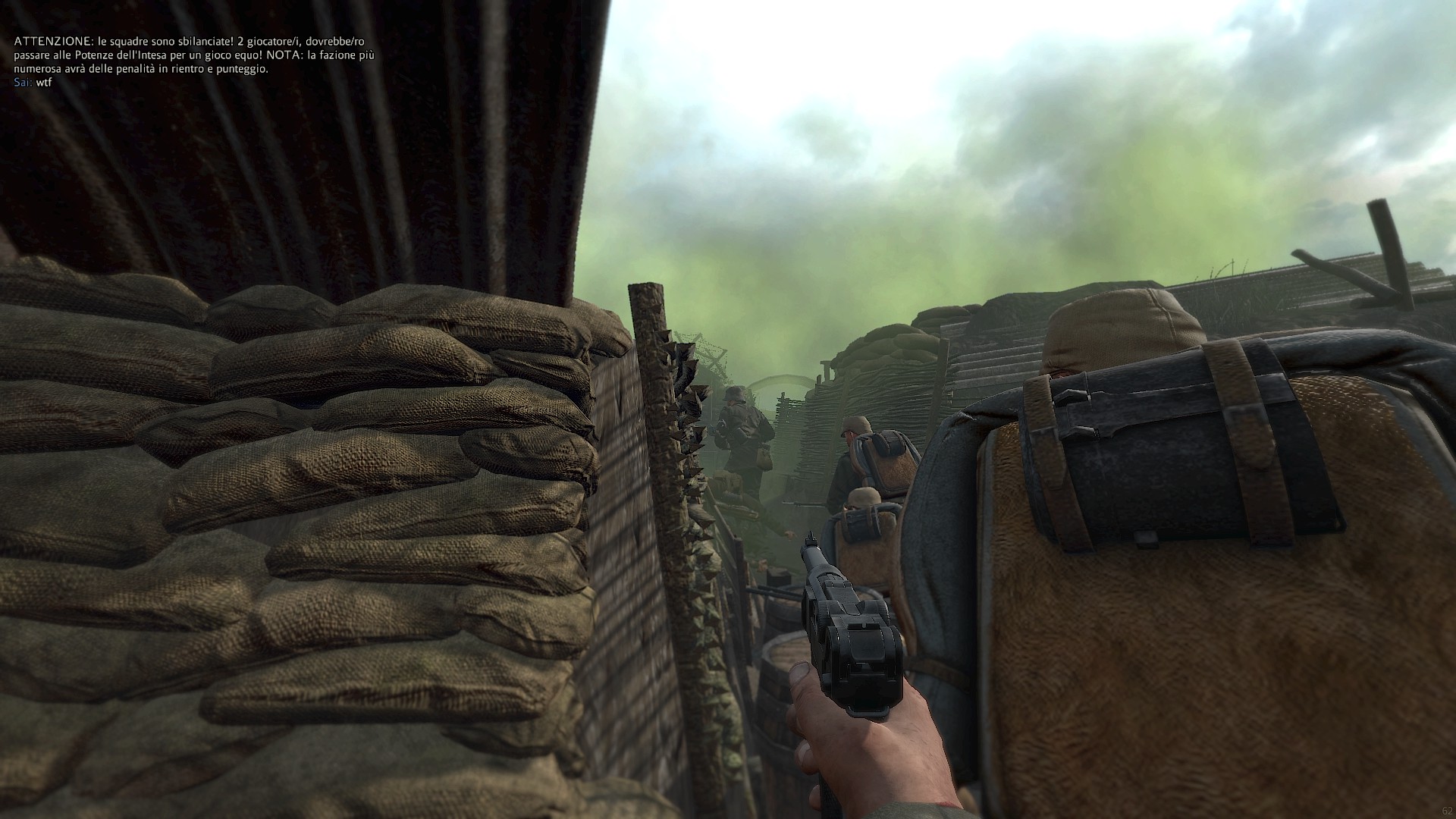 “Gas alert in a German Trench” 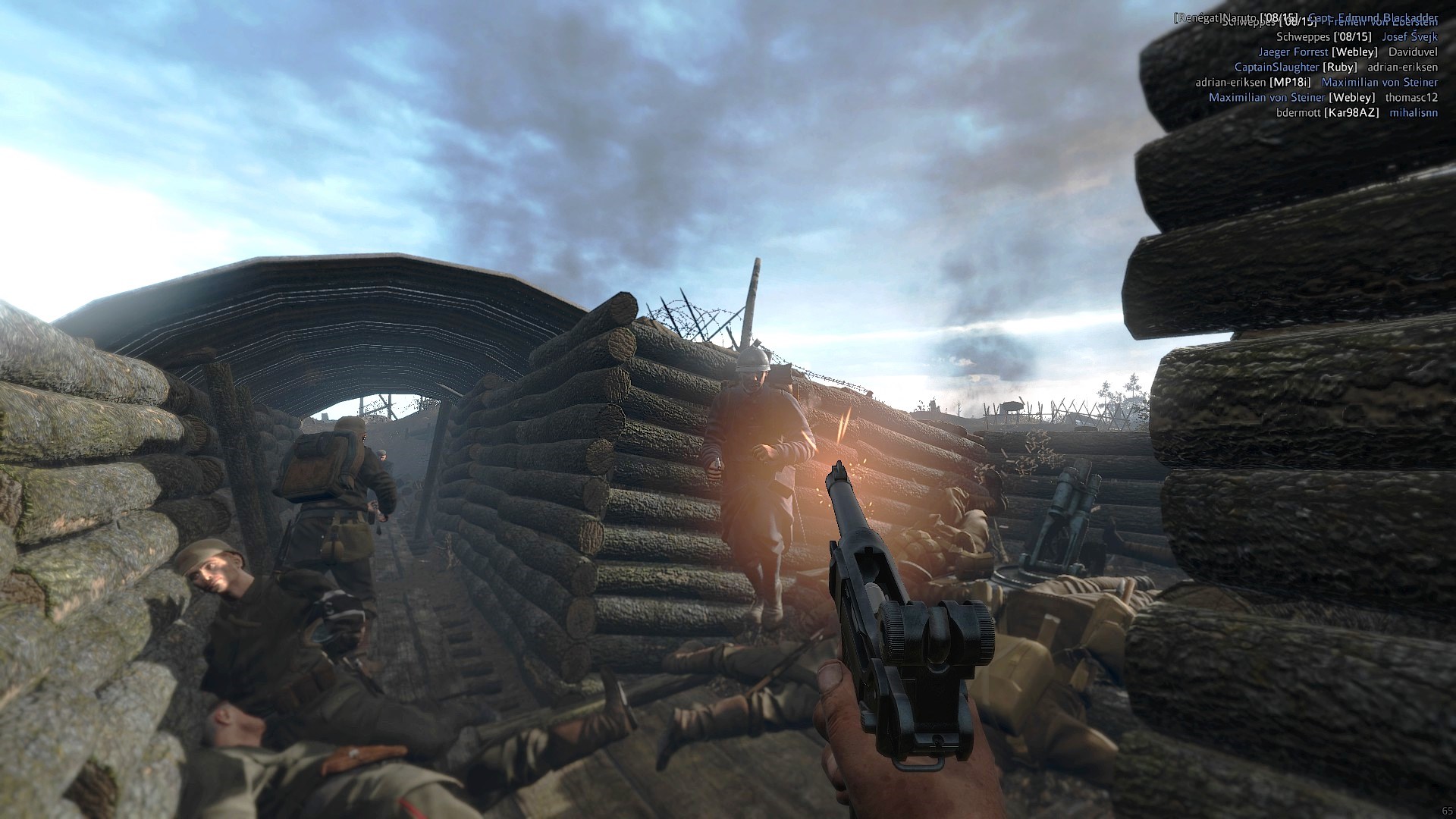 “French overrunning a German mortar position in the Argonne, 1918”

That will be all for this update. We hope to see a lot of applications for the closed test build and see you on the front!

you guys have nice weapons models !

Very nice work guys! I love to see the updates :)

I love how the gas masks' vision changes when you focus your eyes when you start wearing it, i always thought about how games handle this wrong and how this is the way to do it! Good job.