Better late than never blog! Back already? Well, I guess we'll have to give you some stuff.

Back already? Well, I guess we'll have to give you some stuff.

We've had some questions on IndieDB regarding the addition of Kane's Wrath units and assets into TCW. For those of you who don't know, Kane's Wrath is the expansion of Tiberium Wars Will we have Kane's Wrath units, structures etc.? The simple answer is no. Here is why: We are a small dedicated team. We have other game modding projects under way as well, including TCW UDK. We will continue this mod until we have accomplished our core goals for it, and then we will most likely focus our efforts elsewhere. You'll still get a lot of stuff in future TCW W3D updates, but they won't be from Kane's Wrath. If we were to be suddenly overrun with talented people who want to help us with this project however, all bets are off.

Keep your eyes out. You never know what might happen with this project. Mauler, the floor is yours...

Well another week has come and gone! and I can assure you things are going smoothly. I have moved on to fixing up the older models we used in 1.52. Most of the models were directly imported from C&C 3 and there was some issues that needed to be addressed before bringing them into W3D. So i have gone ahead and reboned, edited textures, and applied new effects to most and eventually to all 2.0 models Here is the weekly video's I created to show off progress, first up is the Nod Scorpion tank, the other video is of the GDI Firehawk flight physics testing, which still needs some coding eventually. Final video is of the GDI APC now with a better looking gun and recoil added to the barrels when they shoot!

You want to help us out? It's not hard. Become a tester now and you can have access to all the newest TCW Updates and news. Do you have skill in tech work? Even half-way-decent is acceptable to us, and you'll learn as you go! So apply now, and remember to be active on TCW and IRC to better your chances. 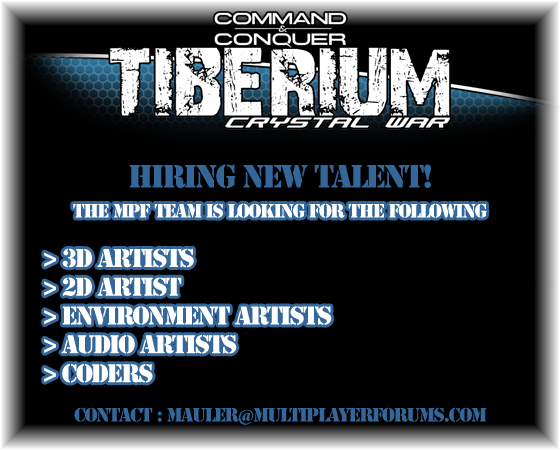 Let's give them their PROPS.

*NOOB* tip of the week

If your gun shoots a continuous stream of blue light, it's a repair gun. Use it on your buildings and your friends vehicles. DON'T use it on enemy vehicles, it still repairs them. ~Submitted by SS67~

Did anyone else notice what's up with the forums? Because I sure did.

Go here to get informed. Multiplay...63-back-online

^That^ is for the benefit of the two people who still believe me despite this being the sixth-or-so time that I've done this. Remember to watch out for those Dev nights! We want to see you guys there, and we'll try and give you guys more notice in the future. As always, play hard, play nice, and play for Kane. I'm sure he appreciates it. God bless all, and happy playing!