Post news RSS Beta' be prepared for Beta: Part One.

As development of the Beta update continues, I'll be filling players in on what and how things will change once the update lands in a series of articles with a positively absurd title!

Posted by TheConjurersTower on May 6th, 2013

Welcome to the first in a series of informational development bulletins (Or 'status updates' to the 'normal people' among us) covering the new features that the Beta update (0.6) will contain once it is released. In this segment I'll be discussing the new Unit and Army systems which I have recently finished coding (in a raw and molten sort of way, they still need a bit of hammering though).

As many of you may know, currently in Siege of Turtle Enclave units are independent entities that may be moved around the map. When they are moved to a tile inhabited by enemies a battle will at once ensue. Many of these battles, especially against higher-end armies, involve masses of units slugging it out, dieing nearly as fast as they can be deployed until on side runs out of troops. The score of corpses pile up and more troops are recruited to fill the holes, but a thought is rarely given to any incurred losses. In my experience, this grows old far too fast...

The new Unit and Army systems move towards eliminating the tedium of larger battles and also makes troops in the battles matter more, as I shall illustrate: 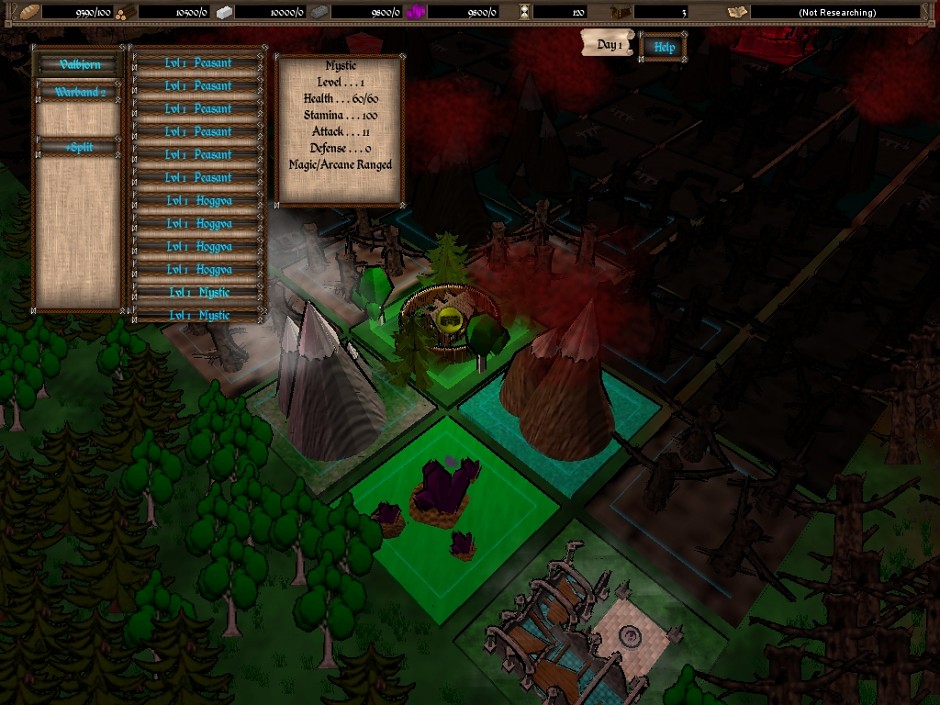 Under the new system, 'Units' are no longer simply troops on the map, they are instead members of 'Armies', and these armies are what the player orders around the map, and each consists of no more that 12 individual units, units may be 'Split' into new armies or 'Swapped' between existing armies. And battles will consist of a fight between 2 armies instead of a fight between two factions standing on the same tile. Armies will also be able to 'camp' on the same tile as their enemies in preparation of an attack or to slow the movement of the enemy army, which will also allow players to coordinate an attack from multiple tiles by move armies into the tile and then 'swapping' or 'splitting' the desired units into a powerful army that can be used to fight the enemy garrison. The full effects and flow of battles will also change but those changes will be outlined in a future segment.

During battle, units will gain experience for fighting as well as killing enemies. When they level up their HP, Stamina, Attack, & Defense go up. Also, units will only be able to use their 'unit abilities' if they reach a certain level, this makes training and protecting veteran units an important goal to unlock more power. Whats that? Didn't I mention Stamina before? Well I'll have to remedy that sometime ;)
Ultimately I'd like veteran units to be more powerful than green troops of a higher Tier, but that will only come out through extensive testing. Depending on how things play out, I may add a standard set of unit abilities that all units have access to regardless of level (probably based on damage type or something) with the more powerful ones being restricted to veteran units, I'll have to see how fun the whole thing is when it's built and working.

One last difference is the HP of units in battle, in the new system it will not regenerate after battle without input from the player. To heal wounded units players must spend resources to restore missing HP between battles, the cost varying with the severity of the wounds. i.e. A unit near death will cost nearly as much as a new unit. This cost will also be slightly higher based on the level of the unit, but the cost hike shouldn't be enough to out weigh the value of keeping the unit alive.

That should pretty much do it for this article, the next one will cover the A.I. and recruitment systems!

Until next time, have fun and take care,
~ Heftig.