I have decided to test NPCs behavior in a small "battle". Their behavior is not final and still needs some polishing, but I wanted to keep you guys updated by showing you some of the new features, such as new ability of archers to defend themselfs with sword in close combat, some of the new animations, etc... So check a new video! ;) 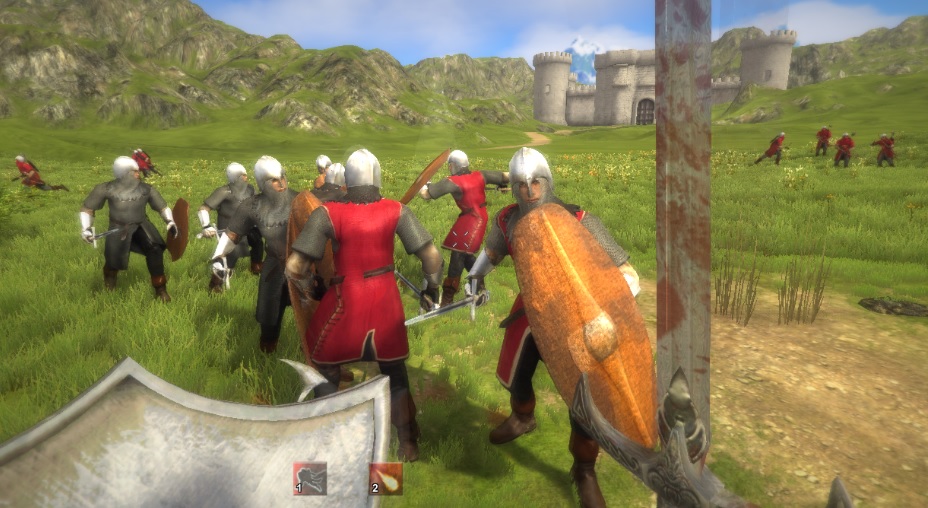 It's been a while since the last update, so I have decided to keep you guys updated by showing you some of the new features.

I have been busy with animations tweaking and NPCs AI lately. So here is a list of new features :

However, I'm still not satisfied with the result and I'm planning to work more on AI. So note, that this is just "work in progress" video and it doesnt show final product.

For video purposes I have increased player's health points, normaly he would be dead after several arrows and hits ;)

You have raised my eyebrow and really gotten my intention. From tracking out of curiosity now to hopeful of the game becoming something I want.

Obviously, just as you stated there is polishing to take care of. But as far as animations go, currently they don't feel fluent. You do a quick swing, you hear a sudden pain sound, the stunned or killed enemy does a rather fast and sudden reaction. Perhaps some more slightly longer / slower death animations may help that.

A part of me is dying to see a kick option (like M&B) or a Shield Bash so you may stun one opponent and finish him or attack someone else. I saw the shield charge, that's an interesting move I can foresee myself investing in.

I have a suggestion that may of never been your intention but maybe worth a try. If you're including an XP leveling system perhaps every enemy you take down can show the +XP gained upon their death. Even a small sound representing a successful kill + xp gained may compliment it. That could very much take some immersion away from a realistic battlefield scenario I know, but as I was viewing the footage I was practically fantasizing it. It would feel right to me.

Finally, any soldiers aren't engaging behind the lines could use with some taunting animations just to remove that static feel within the battlefield. Get more motion and dynamics going.

Hi thank you very much for feedback!
First of all about that kick, in fact I have already animation done (https://i.imgur.com/tE7QMbQ.gif) ,but I haven't implemented it yet so next update will have kick :)
Shield bash is part of the charge skill (its visible at 2:00). That charge will knock every enemy on the ground / or kill him.

Hmm, about those animations. Right now npcs dont have any hand made death animations - when they die, ragdoll becomes active and falling animation is driven by physics. But I suppose I could increase drag on each ragdolls rigidbody which should results in slower falling.

Those +XP gained is good idea. I'm planning to remake all UI so I will make this also and see how it looks :)

Yes taunting animations will improve feel. So I'm writing that to my "to-do" list ;)

Wow, wonderful battle footage! Once again, I love the recoil animation! Great job! I also love the one-hit-kills... how many times have you seen a game where you hack an enemy through their "core" and they are still standing?
Also, I'm loving the particle effects on the flaming sword!
I loved watching the catapult bump over the bodies!
Wonderful animation too with picking up the boulder and putting it in the catapult. This is some very professional work!

Thanks for adding the note about increased health, I like to think he would be dead after 2-3 arrows.

Excellent! Love the character catapulting too!

Woah, this looks awesome. I initially tracked a while back just out of curiosity as well but this is looking like somthing that I would have fun playing and i love how your emphasizing physics and building destruction. This game looks awesome. Just wondering, Is there going to be character development like you have skills and get experience or will it be like a new character every time you play a game