The third dev log for our post-apocalyptic city-builder, bringing us up to date, and talks about what's new in the game. 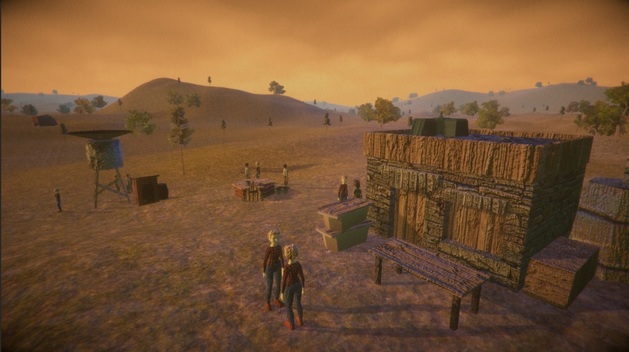 Welcome back to the third part of our blog about making Atomic Society. This edition brings you up to date and covers what’s been going on over the past few weeks. I’ll try to be as neurotic as possible. As you will see, a lot has happened this month and this post would be far too long if I mentioned everything, so here are the big leaps forward.

As mentioned in the last blog, we had stepped out of the bunker at the start of July to tell people about Atomic Society. Even most of our friends and family weren't aware of the game’s existence! (I've discovered self-promotion is hard work when you see faults before praise, I find this Twitter account rather cathartic). But my fears were for nothing. The initial reaction from readers of this blog and on Reddit, has been very encouraging and heart-warming. The game has been in the top 50 on IndieDB and popular on /r tycoon, and that's about as popular as we deserve considering we don't even have a trailer to show off yet.

The downside is that marketing takes a lot of time. It's fun, exciting but endless. I don't know how solo-developers manage it. I’m glad we waited 6 months to go public and didn't start too early, even though common wisdom seems to be shout from the rooftops before you've even got a screenshot. I won't pester the press until we've got some footage to show. Whether that’s wise, we'll find out.

The word people used to describe our game most frequently was “interesting”. That’s great, because I love games that make me think as well provide solid gameplay. Thanks to everybody who took time to post a little comment on Reddit, IndieDB, Twitter, or wherever you heard about this game. Such things feel like a pay cheque when you're working for free. 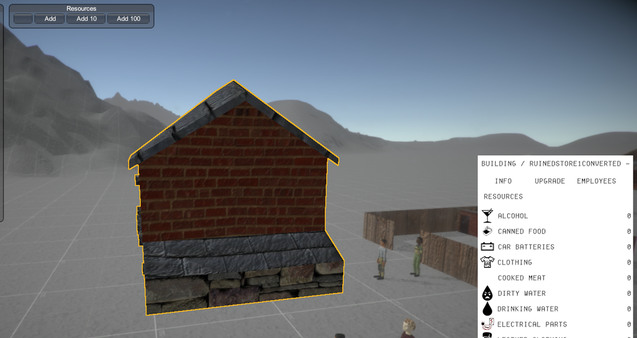 This month has largely been consumed by one of those jobs that sounds simple but took ages to do, several weeks in fact. However, Nick our hardworking coder, has at last finished everything to do with the resources system, a tasks with hundreds of sub-elements. It is now possible for us to set resource costs for buildings (which will require a lot of playtesting to balance right), for resources to be subtracted from a storehouse as workers collect them, and for workers to know what the hell do with building supplies.

The core building resources in Atomic Society are: rubble, wood, scrap metal and plastic junk. Workers will have to go off and find these resources in “resource ruins” we've dotted around the landscape, at least until they run dry. We may also put traditional tree-cutting stuff in there as well, but we’ll see how it feels. Some of our levels our set in deserts and frozen wastes, so forests don’t always make sense (and survival games have bored me to them. Thanks videogames, I am now bored of trees). 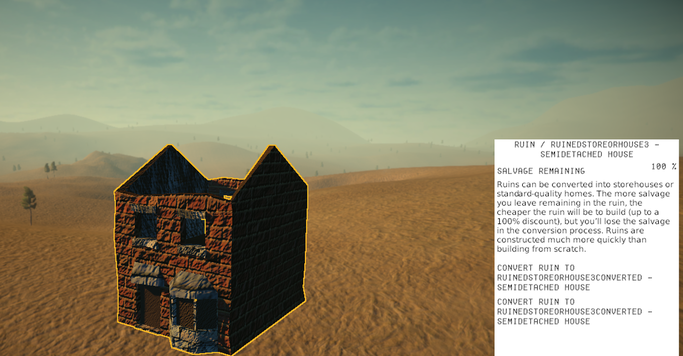 Our building cost system also now works with converting ruins (see pic above). We have a feature where you can convert certain ruins into houses or storehouses for your growing town. If you leave all the salvage in the ruin, it’s free to convert and you get a free structure. But if you take some of the salvage out, the ruin costs more and more to convert. So there’s a trade-off. This all works now, though I'd still like the ruins to physically decay as the loot is removed, but that's a cosmetic thing for later.

One of the biggest tasks has been devising and implementing an inventory system for the citizens. I often moan about other RPGs and their crappy inventories but now I've tried to make one I feel the developer's pain. This is particularly complex for us as we have a playable third-person character who can pick stuff up manually.

The way we have it now, all citizens and the playable character have a slot-based inventory that fills up as they get items, and empties when they visit a storehouse. When their pockets are full, they know to come back from salvaging to drop it off, etc. You can click on any of them to see what they're carrying and it now all works fluidly and reliably. 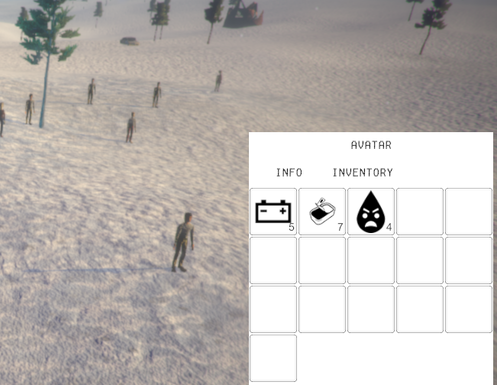 This month we decided to stress-test the game, which was something we should've done a while ago! The current goal for the game is that your town’s population will level out around 500. That’s not a lot compared to other games, but our citizens will have completely unique traits, personalities, skins, looks, etc. They’re more similar to The Sims (though fully automated).

Unsurprisingly putting 500 detailed, animated people on screen made Unity blow up. However, with numerous performance tweaks, Nick was able to get it up to about 400 people on mediocre PC hardware by making some optimisations. Still got a way to go but the challenge is doable. Our goal is for a stable 30fps on an average computer and 60+ for those who can handle it.

View a gif of us testing that here 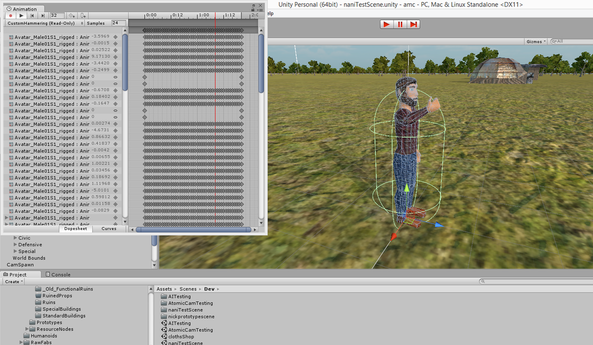 This month Mariana delved into the horrible world of making custom animations to go with some of the ready-made ones we had been using. Not surprisingly, animation turned out to be a massive can of worms. It would've been fine if everything worked, but getting Blender and Unity to be friends has been a nightmare and resulted in some very distorted models. But rage and perseverance paid off and we now have a workable system and experience of how to make custom animations and get them into the game, at least to a basic level. Mariana made a custom hammering/building animation (seen above), and we were able to improve the the avatar (your character) so he can walk or run when you press shift.

We received another new ambient electronic track from our composer, Dawid Dahl. The soundtrack for our game is loosely inspired by artists such Kammarheit, Boards of Canada, Gustaf Hildebrand and others of that ilk. The work of Fallout composer Mark Morgan has naturally also a big inspiration. In other words: dark, haunting, and beautiful. Here is a taster of one of the songs on our growing soundtrack. We're still experimenting and finding our way with the music to get the mood right, but we're in the right ball park.

One of the biggest headaches for me as designer was working out what structures the player would be able to make in this game. I wanted to stay away from medieval things, which I think is a bit overdone. Months ago I did a lot of research on survival scenarios and brainstormed loads of buildings. This month I've spent hours refining that list down so every building is useful, important, and balanced. The goal is that everything will have pros and cons and it will be down to intelligent play to decide what to build. Right now we have 28 building types confirmed. These will all be unlocked at the start when you play the game. Mariana has been making models for them and we'll code the functionality of them one by one.

Some things you might've missed that have also happened this month:

* We now have a subreddit discussion forum where all are welcome to talk about the game.

* This rather poor quality gif of avatar mode in action.

* The fact we are hoping to find a hobbyist UK programmer with plenty of spare time to join our team, assuming if we can find one as deluded as we are.

A couple of people out there have asked about the release dates. Right now, we’re still working to get in all the core gameplay systems in a rudimentary form so we won't be ready to release an alpha version any time soon. Our current goal is to try and get the outstanding core features in as quickly as possible and then in September we'll put out a gameplay trailer/preview thing that at least shows the game in action with some commentary.

At some point over the winter, we may go begging on Kickstarter because we cannot make everything without any form of income, although we’ll do our best! And around that time I'd like to offer people a demo they can tinker with, but we'll see.

Anyway, thanks from the 3 of us to everybody for reading, and your interest and support. Always happy to discuss anything about the game or the way we're making it. One of the reasons I put out these dev logs is to hear what people think, especially on the topics I'm unsure about.

This is looking quite good.