Atomic Society lets you rule a wasteland society and set the laws and morals for the people. Dev Blog #9 continues our personal dev journal. 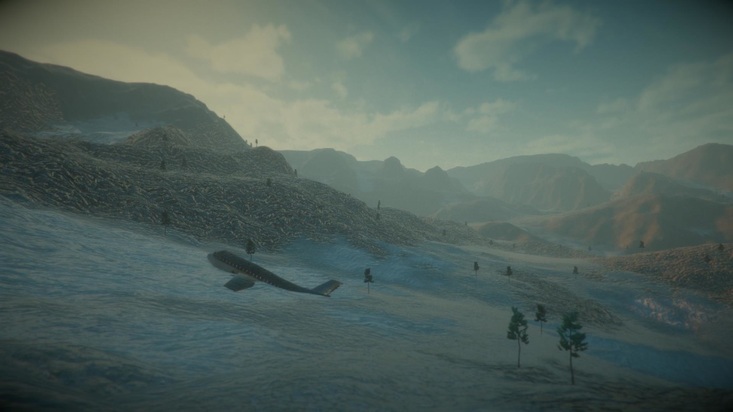 What a crazy month (and a bit). Because of Kickstarter madness, this is going to be a 2-part Dev Blog.

Part 1 will cover new stuff that went into the game over in the last 30 days. Part 2, in the coming week or so, will cover our battle on Kickstarter.
​
So, without further ado, let’s start talking about new content. I'll start by listing the most interesting stuff and then do a an extra "stuff added to the game" at the bottom.

And because this is a Kickstarter special, I should just stress all these changes were done by an unpaid team (with day jobs) in about 5 weeks... And we'd really like to work even harder than this... And we're not sure if we'll be able to... So please visit our Kickstarter page buy your copy in advance (/begging over.)

And if you're a Kickstarter backer reading this, why not go to the front page of our website and sign up for our monthly newsletter? You can always print them out and use them as fuel for the nuclear winter!

And if by the time you read this our Kickstarter is over, then why not give us a free vote on Steam Greenlight and help us get on Steam for later down the line?

And if by the time you read this, we've already been Greenlit and backed on Kickstarter... Then we love you.

Moral Choice Interface
​
This month Nick started work on the UI for the Moral Choice System. This had to be in the game, in some form, before Kickstarter. Atomic Society is all about picking laws and handling the consequences (or failing miserably to!)

The concept of this UI was based on cards, not that we had time to go to town on prettiness. I imagined the "cards of fate" being presented to the player, big decisions that would influence 100s of lives. It was also a huge challenge to try and write compelling and even-handed text for a range of views. As designer, I never seem able to fit into the right or left wing camp, and love encountering different points of view, so this was a fun challenge at least.

The choices you see above were intial ideas on what you might do with murderers but since the Kickstarter started I've developed the system a lot and we've now got a much better formula on how to do moral choices, which I'm going to talk about in a special one-off dev blog soon.

Right now, Nick made it so you build a Town Hall (where your leader lives) and then you can access the law interface. This shows all the issues that are currently active in the game. And you just click on one to deal with it. 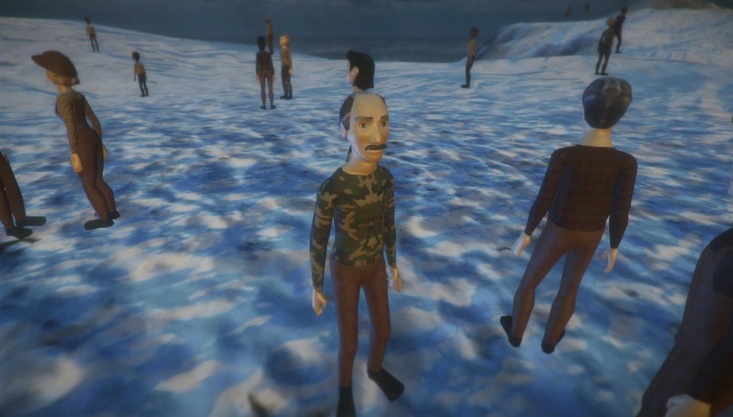 Mariana created the models for the last members to join our apocalyptic society, elderly citizens: male and female. It's hard to say how many citizens will live into old age in Atomic Society, but surely some will. The citizens will eventually age on their 59th birthday currently and gain grey hair as well. I suppose if there was radiation sickness they wouldn't have any hair at all. Not wanting to deal with radiation as a designer is one of the reasons the game is set decades after a nuclear war, when Chernobyl style, radiation should have receded (any science expert who thinks I'm wrong on that, please comment and educate me!).

I also adjusted the textures somewhat, getting rid of some of the insane levels of bump-mapping we had and made things that should shine, shine. You could see on the skin of the citizen above, for example, how it has a more natural sheen.
​
Firing Workers & UI Improvements

Adam has been working away on the UI as is rapidly becoming our UI expert (a title he will hate). He has implemented the ability to fire workers, which will be essential for players as it's not always good or wise to have the max number of employees in a workplace (if it's unpopular). We might add a debuff that makes fired citizens grumpy or something later if you sack them.

He has also been greatly expanding the amount of information you get on a workplace's menu. You can now see what specific workers are up to at any time, how quickly the building is producing something, and how much of the building's internal storage is taken up. Information is power in a city-builder after all.

Long-time followers of the ugliness of our UI may also notice that the buttons look a look chunkier and inviting to press. Mariana is a fun of Blizzard-style UIs and I love a chunky UI too, so our buttons look better now. 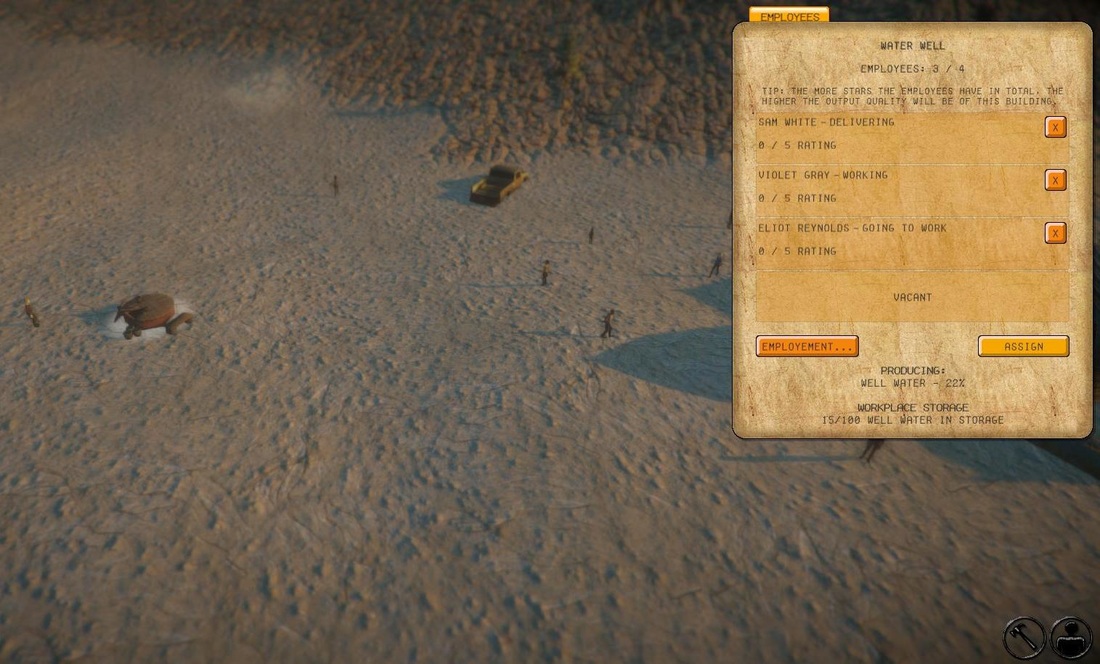 Winner of "didn't think that'd be so hard" task this month has been delivery. Adam started implementing the ability for citizens to visibly deliver goods. Until now, goods just teleported from workplace to storehouse.

Now they visibly get delivered by people who have inventories.

It sounds obvious to deliver a box from one building to another, but what if a citizen is delivering a good with a full inventory but she wants to pick up a bottle of water at the same time because she's thirsty? What does a scavenger on the far side of the map do when the storehouse fills up? You can imagine the challenge of having 100s of robots/NPCs carrying goods around and having their own individual needs at the same. Needless to say, it led to deliveries going missing.

Atomic Society, is - I believe - one of the few city building games where workers deliver their own goods. There are no labourers or specialised delivery people. I find games where you have to rely on a third-party to deliver goods rather tedious and occasionally unrealistic.

So NPCs now deliver, NPCs now know how to queue properly, NPCs know what to do when they have an urgent needs a job to do, and basically the complex simulation of production and delivery now works.

This makes playing the game a lot more bearable!

Death & Ways of Dying
​
Believe it or not - no citizen in Atomic Society had ever died - until this month. Even the murderers we implemented last month merely tried to assassinate immortal targets. This month Nick added ragdoll deaths for murder victims. I was so happy about that because I love unscripted anything in games, and the fact all deaths in our game will now be physics-based and unique will lead to much amusement. You’ll never see 2 dead bodies in the same position. ​

Such a pity this wasn’t ready in time for Kickstarter but Mariana also created a cool prison-style shanking animation for the murderers and perfected a new system for creating animations that means we can churn them much more often in future. Right now we're focused on just making the citizen do the thing he needs to do, then we can add in an animation for it. 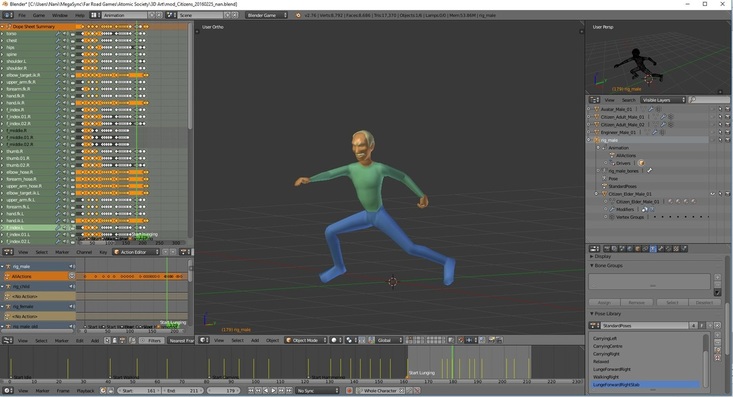 Have you ever tried to balance an unfinished game? Probably, if you've ever played a multiplayer game. It's a nightmare. But I had to try so I could just play the game. Under the surface Atomic Society is a game of numbers. How hungry someone gets, how often a murderer kills someone, how much water a water well makes, how long a citizen sleeps... All these things are working and I wanted to try and find a comfortable range for them all. That's a lot of numbers to hold in your head. To do this Nick created a calculator tool (which might be familiar to anybody who has used a DPS meter in an MMO) and I can now edit all these settings and immediate feedback. It’s helping a lot and should make fine-tuning the difficulty in future much easier. 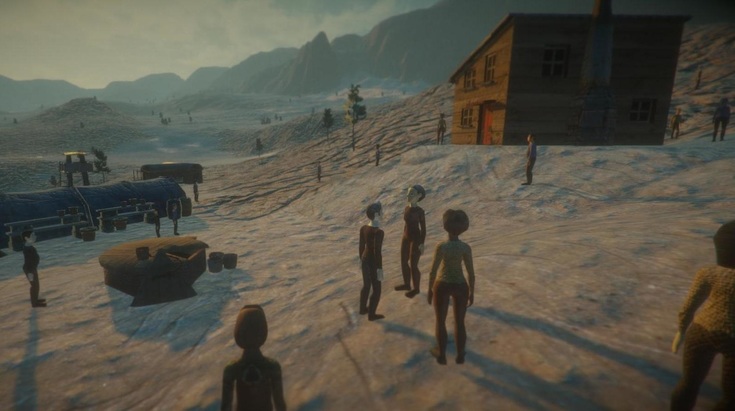 Coming Up in March:

These are some of the tasks lined up for us over the next month or two.

Final Thanks to Our Growing Community:

We are still a small family of people who know about Atomic Society, and Kickstarter hasn't yet changed that (despite 3700+ voting that they'd buy our game on Steam). Game development is a tricky and lonely road sometimes, and to everybody who has supported us in any way, be it just reading this far, thank you for being half the reason we carry on (the other half being the game itself!)

Is there a way to get an alpha/beta demo version of this game by donating or anything yet?

Not yet. The alpha version will be out this summer.