Welcome to the April update (part 1 (maybe)), it’s been a while! Take a look at what we've all been up to!

Hello there ladies and gentleman... who are we kidding?

So, we as a team have been talking about various aspects of the game. Half of them involve whether or not to ‘enhance’ princess Leia’s cleavage. It was later deemed sexist but nonetheless, remains a good idea.

Besides this, the most divisive issue continues to be how we can maintain continuity between the Galactic Civil War and the Republic Eras. It is true that George gifted the Star Wars fan-base three more films that surpass the originals in many aspects (mainly the sales of toys and merchandise) beginning in 1999.

Think about it! There are very few species of aliens that carry over into each of the trilogies. We can confirm that ewoks will be featuring heavily in the Republic segments of the game. In fact, as you read this our artists are adapting them for desert, snow and even space environments as George would have intended.

But that’s not all! We wanted to bring everyone’s favourite species to the Galactic Civil War.
We did not want to feature them as heavily as the Ewoks since some things are best served in small doses.

Anyway, enough from me! Here is a WIP screen of what we are working on. See you in the next update. 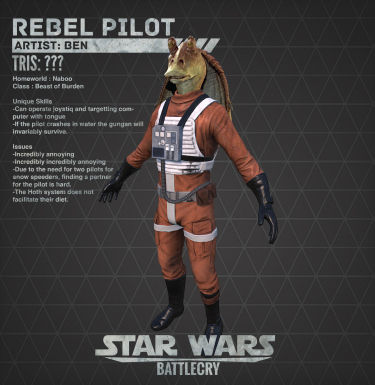 That's not fair. Only Jar Jar was annoying, not the entire Gungan species. Funny none the less.

"Meesa happy to flyyyyyyy. Whatsa dissa button do?"
Great Gungan model, but don't they have weird feet or something, so they can't fit into these standard boots?

Yah they have big feet.

You do realize it is just a Photoshop job not a model right?
Still funny of course....

I thought this might actually be some idea that wasn't done yet. Since we've seen everything else in Star Wars mods, I actually considered it a plausible idea.

could be a feature that's auto-forced on April Fools Day. (Heh...)

"Besides this, the most divisive issue continues to be how we can maintain continuity between the Galactic Civil War and the Republic Eras. It is true that George gifted the Star Wars fan-base three more films that surpass the originals in many aspects (mainly the sales of toys and merchandise) beginning in 1999."

Is this an April Fools joke? Because honestly I think having Multiple Species in the rebellion is a good idea...

Though I'm also assuming the game devs don't want to admit that the prequels added anything good to the series.

It is an april fools joke and that's not true they made the originals look better! That said, they serve well for games because the clones v. droids thing on all the new worlds (defined by one topographical feature) are fun.

Josh, being Captain Obvious is fun isn't it! :P

You actually got me for a second, then i remmembered the date lol.. even though i saw it on April 2nd :P