It's been two months, but I made a lot of progress on things related to a near release. I wrote half of the documentation, and it takes time for a game engine! Lot of debug too and still progress on the eD level.

Hi everyone,
It is still hard to find time to work on the the SHMUP Creator, but I’m finally doing things I’m postponing since months. (Or years? :/)

GRADIUS DAY!!!
Last week was Gradius day! Gradius (actually NemesisII on Msx) is the reason I'm working on this, so I made a small level:

I’m doing 3 things at the same time, which are all important to complete the tool:

DOCUMENTATION:
I wrote half of the documentation. It’s a first draft but the structure is there and I’m describing all the features and tools. And there are a lot of features. I will also write a few basic tutorials to help people at the beginning, but it’s for later.

DEBUG:
As always, I corrected a lot of bugs, crashes, small annoying things, as well as correcting small UI features to streamline the use of the tool. I’m the first user, and I want the SHMUP Creator to be nice and friendly to use. This is why there is a lot of invisible things. For instance, this month I added a variable speed zoom: the more we zoom out, the faster it gets, the more we zoom close to the level, the slower it gets. It’s invisible, but it works and make the level navigation more precise and fun.

2D LEVEL:
I completed the level design on paper, then I created the whole level with basic shapes. It allowed me to adjust the scrolling speed, the position of the different gameplay sections and the length of the level.
Then I started to prototype the gameplay, and it was great: I had some gameplay ideas (often inspired from R-type Leo or Gradius,I confess) I was able to set-up and try in a few minutes with the SHMUP Creator: moving platforms, a boss escaping the player and destroying walls in the way etc. Sometimes, trying things is a way to find new bugs or forced me to correct some behaviour because I didn’t thought about it. But when it works right the first time it’s a real joy! 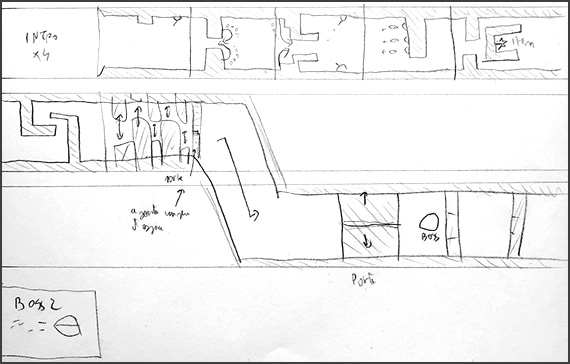 SOUNDS:
I’m beginning at last to think at the release as a near event, coming slowly but surely. One blocker for me is that I’m using some temp assets from commercial games to test the tool. Most of them are sounds and musics. I cleaned everything this week and made a list of sounds I need in order to release the game, and I will ask a talented musician and sound designer to create them for me.
It’s really something I’m looking forward to, because without those sounds I can’t make videos, teaser, trailers on youtube. And I’d love to show more soon, like some level creation timelapse.

Glad you're making so much progress, thank you!