World interactivity and it wouldn't be Ultima-inspried if you couldn't bake bread... thus baking bread has been added to the game. Demo 0.472 is also now available for download.

Firstly, a new demo version 0.472 is available for download here.

Secondly... Wishlist the game on Steam

This will be the last gameplay update in a while. After this, I'm shifting gears and focusing on story elements. A lot of these and previous gameplay changes were necessary to move forward.

You can now harvest wheat, grind the grains into flour, draw water from a well, add water to flour to form dough and bake bread!

The world is now a more interactive. Almost any small object in the game can now be moved, put into your inventory or sold etc. They also now show at correct depths and are not limited by grid placement.

Due to a lack of foresight on my part when I first started this game, I had to manually realign every single one of these items in the game...

I've given some of the very early sprites a facelift. I think you will agree that is is a big improvement. I am particularly happy with the blacksmith grindstone. I remember creating the original sprite years ago... My thought process was something like "F*** it... that will do for now..."

I've also added a millstone for grinding wheat into flour. 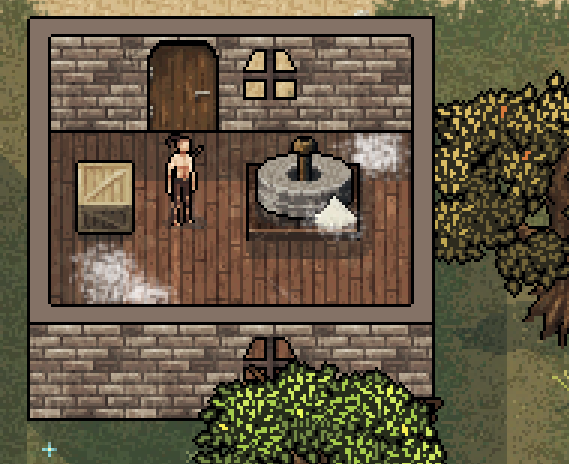 Previously, adding items to containers in the world was a giant pain in the ass. I've now developed a way to add them easily. It doesn't effect the player experience, but makes things a lot easier for me. I've added some books in the bookcase in Test Town for your reading pleasure.

Thanks everyone for your continued support!