I've been hard at work on adding one of my all-time favorite game types to BlitzBotz, and am happy to share the latest update of our Zombies Graveyard Arena with the public. Soon, players will be able to test their skills against an unending swarm of zombies as they hone their skills and pave their way into the online leaderboard. The single-player version is nearing completion, and Co-Op is soon to follow, so grab your friends and prepare for the rush of BlitzBotz Zombies!!

As a long time fan of zombie levels in just about any game, I decided the next logical step for BlitzBotz was to add it's own version of this tried and true game type. The concept was relatively simple: send packs of zombies to attack the player in increasingly difficult waves. Maintain a leaderboard and personal high scores, and in keeping with the theme for BlitzBotz, make sure that the server handles the zombies rather than the client, to prevent any cheating and/or network manipulation. What has come of the work is a relatively simple, but incredibly fun, zombies game for BlitzBotz that I'm hoping to have live on the site very soon. 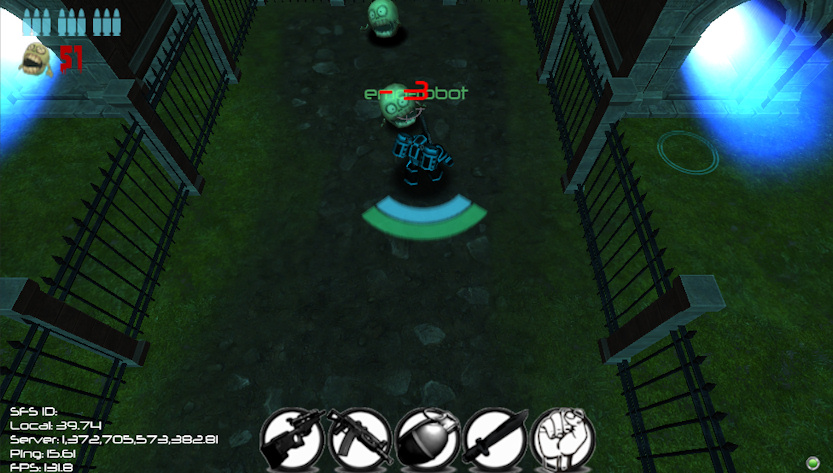 When deciding to build the Zombies Arena, the reasoning for doing so wasn't just for entertainment value, however. I also realized that this would provide me with a much easier way to test the game mechanics as they are added and updated to the multi-player Arenas. Coding this game entirely on my own, I often run into the problem of having to control two different BlitzBotz from two systems simultaneously, which can make the timing of attacks a bit difficult. By creating AI controlled zombies, I effectively removed this annoyance, and can now tweak weapons systems and other loadout items much easier than before, since the zombies never stop coming and they get increasingly more difficult to kill as the game progresses. This allows me to get a feel for how powerful the weapons are when compared to one another, as well as making this work much more enjoyable, since I am now effectively playing a game as I work.


The Zombies Arena had started out using the standard BlitzBotz octagon style, but it became apparent that this type of arena wasn't suited well for swarms of zombies coming after the player. I needed to design an arena around the concept of the level rather than vice versa. On top of that, while the textures of the arena work well for match-ups between multiple players, the zombies arena needed a little flair to provide a sense of ambiance. The solution was a cross-shaped arena with a graveyard design style. The shape of the arena itself allowed me to create some simple pathfinding scripts as the zombies approached the player, and the graveyard design seemed to fit well with the theme of the level itself. Zombies now appear behind iron gates and will move via waypoints to find the shortest and fastest route to the player, the end goal being to swarm the player with zombies until they are overwhelmed.

Currently only the Primary & Secondary weapons "work", allowing the player to swap between their assault rifle and the back-up pistol. The Jetpack Armor Module works to a point, but still allows the player to fly outside of the play area, but I intend to fix this soon with some simple collider scripts. The Shielding Module works to a point as well, but is absolutely pointless in-so-far as helping protect you from the onslaught. I intend to fix this soon as well, and the shield will soon allow you to quickly defend yourself in the event you cannot get away from an approaching zombie in time. Lastly, although the grenade animations works, and the grenade flys out into the crowd of zombies and explodes as one would expect, it does not cause any damage yet. A quick update to the server's damage calculation scripts will remedy this, and I hope to have all 5 action buttons working as expected in the coming week.

The pathfinding needs some tweaking, the zombies attack system needs a bit of improvment, and 3 buttons need to have their actions finished; but for the most part, the single-player version of the Zombies Arena is near completion. This entire setup was designed with Co-Op in mind, and it won't take much more work at all to include another player to help you pwn one wave of zombies after another. Also on the to-do list is to include weapon drops, which will allow the player to select from 3 or so 'overpowered' weapons as they earn points for their kills. For instance, kill 20 zombies and earn yourself a flamethrower... earn 35 and you can opt for the rocket launcher... save your points until you've reached 50 and you'll be lasering mutliple zombies with a single beam of concentrated plasma.

With the leaderboards scripts already tracking your high scores, your total number of games and zombies killed, and allowing you to easily see where you rank in the world of BlitzBotz zombies-pest-removal, I'm hoping that once the single player version is available players will be as excited as I am to start earning their place among the top BlitzBotz. Alpha registration is still open, but once we hit Closed Beta stage only the first 100 registrations will have access to the game, so be sure to get registered early to secure your place in the ranks.