Wildfire Games, the international group developing 0 A.D. - Empires Ascendant, is happy to present the 13th 0 A.D. development report covering everything (or nearly everything) that happened since the 12th report in June. Most of the items covered in the current report went into Alpha 14 Naukratis, so you should be able to see them in action right now!

Wildfire Games, the international group developing 0 A.D. - Empires Ascendant, is happy to present the 13th 0 A.D. development report covering everything (or nearly everything) that happened since the 12th report in June. Most of the items covered in the current report went into Alpha 14 Naukratis, so you should be able to see them in action right now!

First and foremost, Wildfire Games has launched a crowdfunding campaign via IndieGoGo, with the aim of raising $160,000 in 45 days. If successful, the funds from this campaign will go toward paying 2 team members to work on the game full-time (40+ hours per week) for up to 2 years! For our fans, that means more features faster and better performance quicker. Our stretch goals include another year of paid development so we can create an exciting single player campaign for the game! Click the logo below to check out our campaign!

Screenshots for This Report 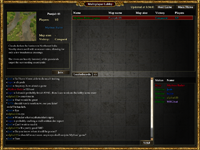 Multiplayer Lobby (Work in Progress)
Want a human sparring partner? The new multiplayer lobby will greatly facilitate the organization of multiplayer games. Badmadblacksad wrote the framework for the lobby based on XMPP and gloox while Josh, alpha123 and leper added a wide range of features including IRC commands, nick highlighting, anti-spam filtering, moderator support, timestamps, and much more.

Currently, Josh and alpha123 are implementing a game monitoring and reporting system in conjunction with a leaderboard based on an implementation of an ELO rating system by scythetwirler. Players will have the option to play rated and unrated games as well as team games. Viewing other online game-seeking players will be located in a simple, intuitive part of the main program.

Programming Infrastructure and Other Important Contributions

Bug Fixes and Other Improvements

We also want to thank all our contributors that are committing patches with new features and fixes. Not all of them make it into the report, but we are grateful. We would also like to thank scythetwirler for his crucial help with writing this report.

If you want to be part of this project, you are invited to head to our forums and join our active community! Importantly, we are always looking for skilled programmers who want to contribute in fields such as gameplay, AI, sound, and graphics. We are also looking for Animators and 3D artists, a Sound Lead, Video Editors, a Documentation Manager, and Scenario Designers. Feel free to introduce yourself on the forums using our recommended application format. Your contributions are crucial! Thanks in advance.

See you next time with the latest development news!

I must have missed something here... How does air planes fit into the year of 0.ad.?

Exactly. Fun "side projects" like the P-51 Mustangs help to showcase how far modders could take our engine.

I guessed something like that, but you know... AoE had cars if you wrote "bigdaddy" in chat :P

Solely for curiosity's sake, here's a question I'm sure people have been asking your team quite frequently, Mythos_Ruler: why should I donate to a free game anyone can help develop when all the stuff promised in the fundraising page will be added eventually? Sure, I could donate now and get more features sooner, but the game is FREE! I could come back in a year or so, see what's new, rinse, repeat, until the game is at a point where I'd want to download and play it. It's not like, say, Watch_Dogs or Battlefield 4, which don't ask me for money for continued/faster development, are paid, and I know I'm getting a complete game.

until you've spent a year of your life developing something and then give it away, you probably wouldn't understand. I have all of my music up on bandcamp for pay what you think it's worth to you. $0-infinity... Most people don't pay, but the ones that really appreciate it do. It's the ones that do pay for something that's free that really makes me feel like it's valued. Anyone can pirate a game if they wait long enough for a crack to come out. We help support teams like this because they don't expect it and they do it for the love and we love to play what they make! :) Watch Dogs and Battlefield 4 also have million dollar budgets and a team of 100's working them... Huge difference that is in no way and apples to apples comparison.

I do understand somewhat, actually. As you said, you're giving away a year's worth of your time and effort. That means you'll likely have to have another source of income, such as a full or part-time job, just so you can pay for the bare necessities (food, water, shelter, etc.). Having people simply pay nothing for your "pay what you want" products tells you exactly what they think it's worth - nothing. Like you also said, it's those people who actually PAY for such a product which makes it feel worthwhile.

However, the reason I asked the question I did was as a "devil's advocate" question based off of rationalizations I've heard others online and IRL use - not as a "why u asking for moneies for a FREE game" question. I happen to agree with the reasons why the 0 A.D. dev team are wanting to bring on a full-time coder (hence the crowdfuning on IndieGoGo) - problem is, I failed to mention that and why I was asking my initial question in the first place. I apologize for that.

Too few people understand why a musician like yourself and why an open-source project like 0 A.D. would be asking for money when your products are available for free - and not everyone is as generous as yourself, either because they, sadly, don't feel the same way about things as you do, or because they do, but they don't have the money to reciprociate their feelings.

I appreciate the question, and it's one we hope to address adequately in the coming days and weeks as the fundraiser continues.

It really comes down to this: Do you believe in the project or not? If it's something that you believe is worthwhile, then you can vote with your dollars and support its continued development and improvement. Look at the Humble Indie Bundle. You can pay whatever you want to pay, but some people believe in independent games and what their success represents, so they donate money to their cause, sometimes a lot of money, in the hopes that such quality gaming can continue into the future. It's an investment in your future experience as a gamer.

0 A.D. - Empires Ascendant will eventually reach 1.0 (Gold) release. But do we want to release a "final" version of the game in 4-6 years with poor performance issues, fewer features, and less balancing with a neutered game design? Or do we want to release something that will knock everyone's socks off in 2-3 years time? We want to make a statement, and that is that independent, open-source, cross-platform (Linux! Mac OSX!), crowdfunded games can meet or exceed expectations in a world of multi-million dollar AAA releases. We can't make that statement without the help of those who believe in us. :)

WOW!!! I remember this game from back in 2009. IT HAS COME SO FAR!!! Nice work guys! :)I was very impressed by what you had cooking back then and now! Can't wait to try out the new build.

Thanks! Make sure to let us know what you like and dislike about the game!