Just your day to day Strategy and FPS player with a sense of humor and independence. I'm also the in-field Commander of the casual clan JSSG. These days I mostly fiddle around with Warhammer 40K stuff, read up on Lovecraft and Tolkien, and try to build a personal physical archive of enjoyable movies and TV series. I'm making a living of being a radio board operator and station engineer. If you see a "Vadronus Prime" running around, that's my alternate gamer-tag. (Long version of Vader91 really) The Free Voice from Vegas Itself! 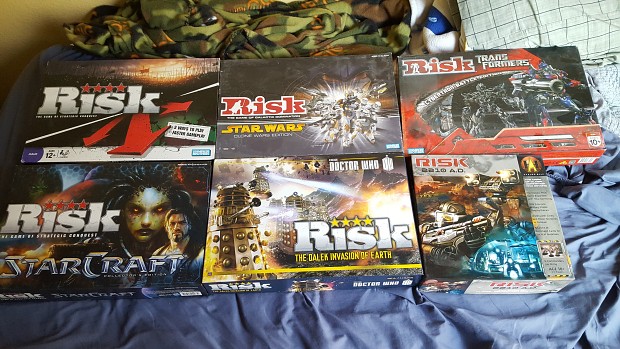 Ah yes, I have that version of star wars risk as well not complete though,I'm missing some of the CIS leaders:/

Well, they're pretty simple tokens. I could make some proxies you could print out. I'll make a print sheet either tomorrow or the day after for you.

The only problem with that is my printer is junk

That's some risky stuff right there.

I was cleaning my garage the other day and I came to the realization I had a bunch of different versions of this classic strategy game. Keep in mind my grandfather has the classic Napoleonic version at his house, this is my private collection.

Risk (Revised/Modern Version) - an interesting update to the classic formula with cool city components. However, not a fan of the 1-3 pieces rather then 1-5-10, but minor gripe. Objectives are interesting, though feel a bit out of place.

Risk Clone Wars - Hard to argue with this old game. Works well with additional mechanics implemented smoothly. Gotta love being CIS and pulling a successful Order 66, suddenly owning half the board, lol.

Risk Transformers - weakest of the bunch with clunky rules and so much missed potential. The components and board are cool though, I might make a "War for Cybertron" board game using these parts.

Risk Starcraft - The newest version I own, so I've only played one round of it so far. I like it; basically the revised modern Risk (objectives, cities, rewards) with a cool theme and some slight faction variance. Components are downright sexy and has worthwhile heroes.

The Dalek Invasion of Earth - Another one I haven't played as much, a wacky twist to the game where everyone is a branch of the Daleks (Dalek Civil War? Alright then) with cool mission and power cards revolving around other Dr. Who villains. Also, we have the Doctor as a doomsday clock, probably my favorite implementation of a turn limit (long enough to have a decent game and can be manipulated), a mechanic I usually dislike.

Risk 2210 A.D. - By far my favorite. Sweet components, awesome rules, commanders, sea and lunar (yes, there's a moon map) territories, and power cards that are worth a damn (like nuking a territory! Gotta love nukes). Also has a strong modding community with shit-tons of custom content easily accessed and implemented. A great game in it's own right while having a lot of potential to become downright epic.