Hi and welcome to the first devlog of Orbis multiplex, a complex simulation oriented 4x indie strategy game on planetary scale. In this game the player will lead a nation from late stone age all the way into the modern era, all whilst adapting to an ever changing environment. 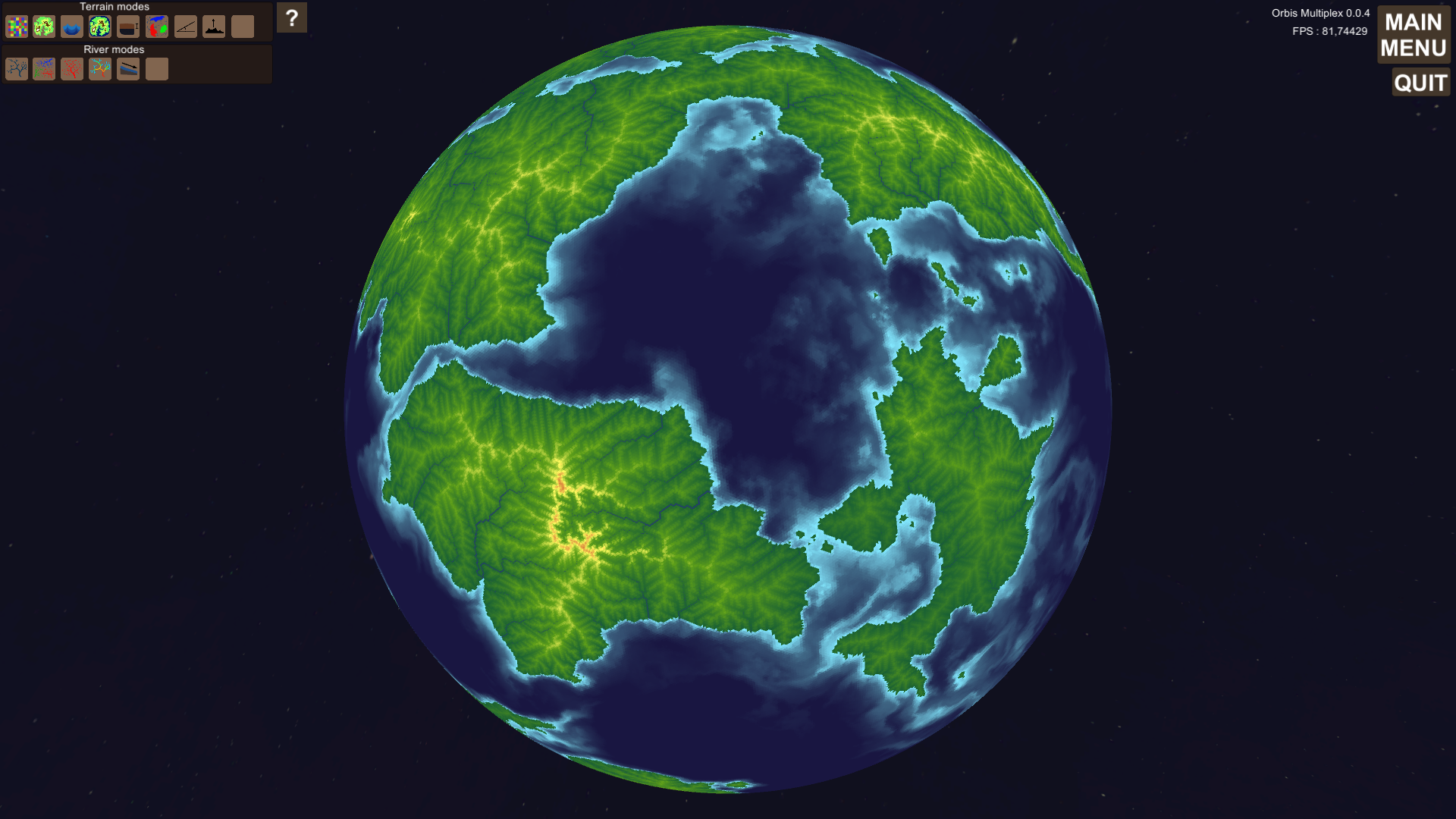 The foundation of the game lies in the simulation of certain systems. Some of those systems would be geology, hydrology, climatology, ecology, and economics. A true to life and realistic world with dynamic features will be vital to this game. Things like plate tectonics and erosion will be used to create realistic planets. Climatology and ecology simulations will be used to inhabit the world with realistic animal and plant distributions. In terms of gameplay a 3 component system will be used to model the economy, the player having control over only one of these components.

Interactions amongst these different simulated systems will play a key part in gameplay. The player may for example make certain animals extinct by overhunting, thus destroying a long term food source. Or prevent desertification by preserving woodlands in key areas. Another interaction could be pollution from industries killing fish downstream. In too many games the world is a static map onto which the player builds and conquers, not so here. The world will be alive and change over time as the player develops his society.

One of the core philosphies of the game is the idea of macro over micro decisions. With this i mean that the player will mostly make decisions on a high overreaching macro level. For example: setting tax rates, researching technologies, making trade deals are all macro scale decisions. Examples of micro decisions would be: Moving individual soldiers, constructing individual buildings, controlling individual people. Micro scale decisions can be tedious and repititive, and on a game of this scale, they would be both annoying and boring. However, making large scale decisions, and observing how they influence lower scale areas will be interesting. For example increasing the tax rate on coal could in the long run lead to deforestation, as the population seeks cheaper alternatives for heating. Unforseen concequences of these decisions will be both inivitable and fascinating. 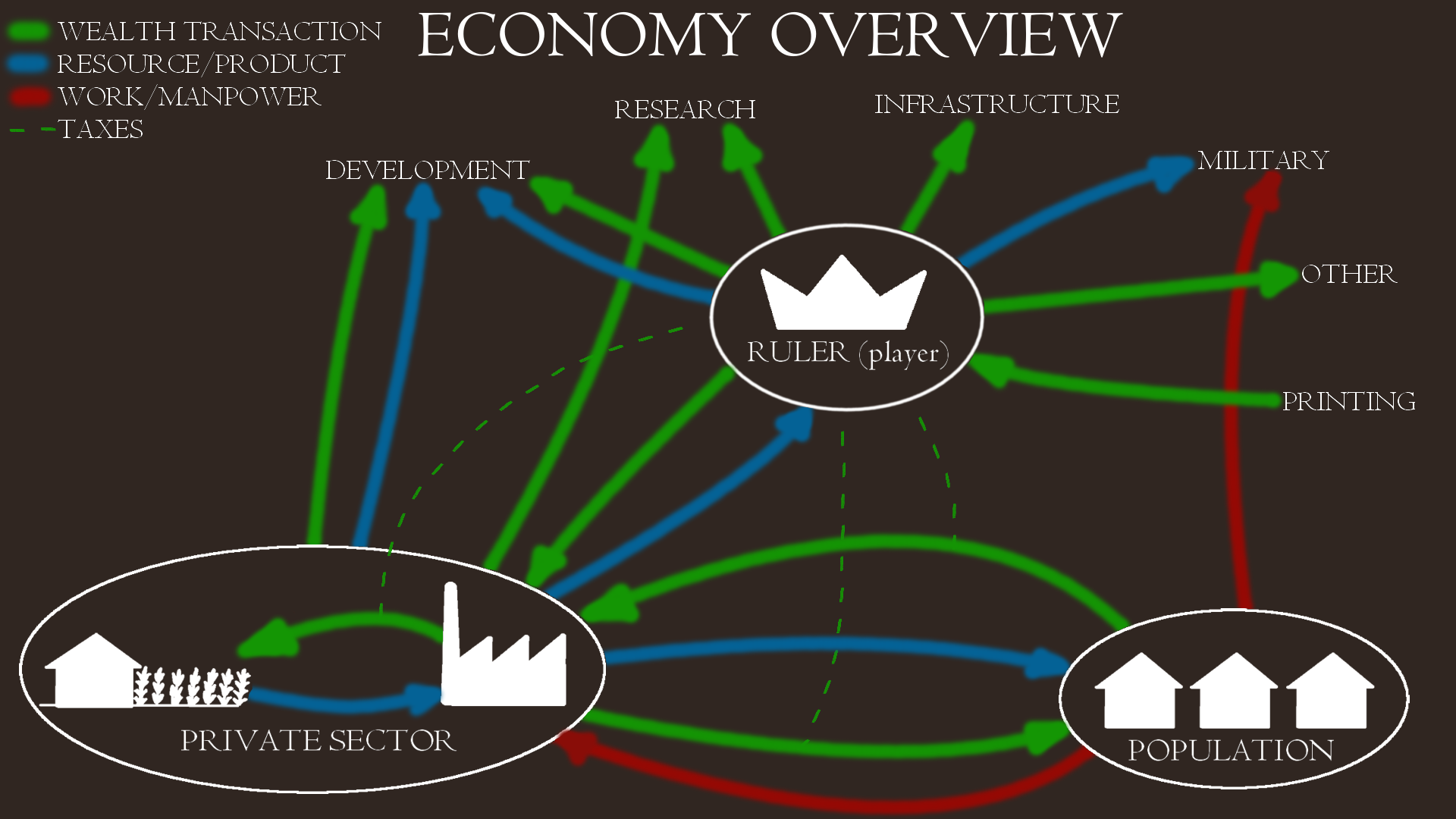 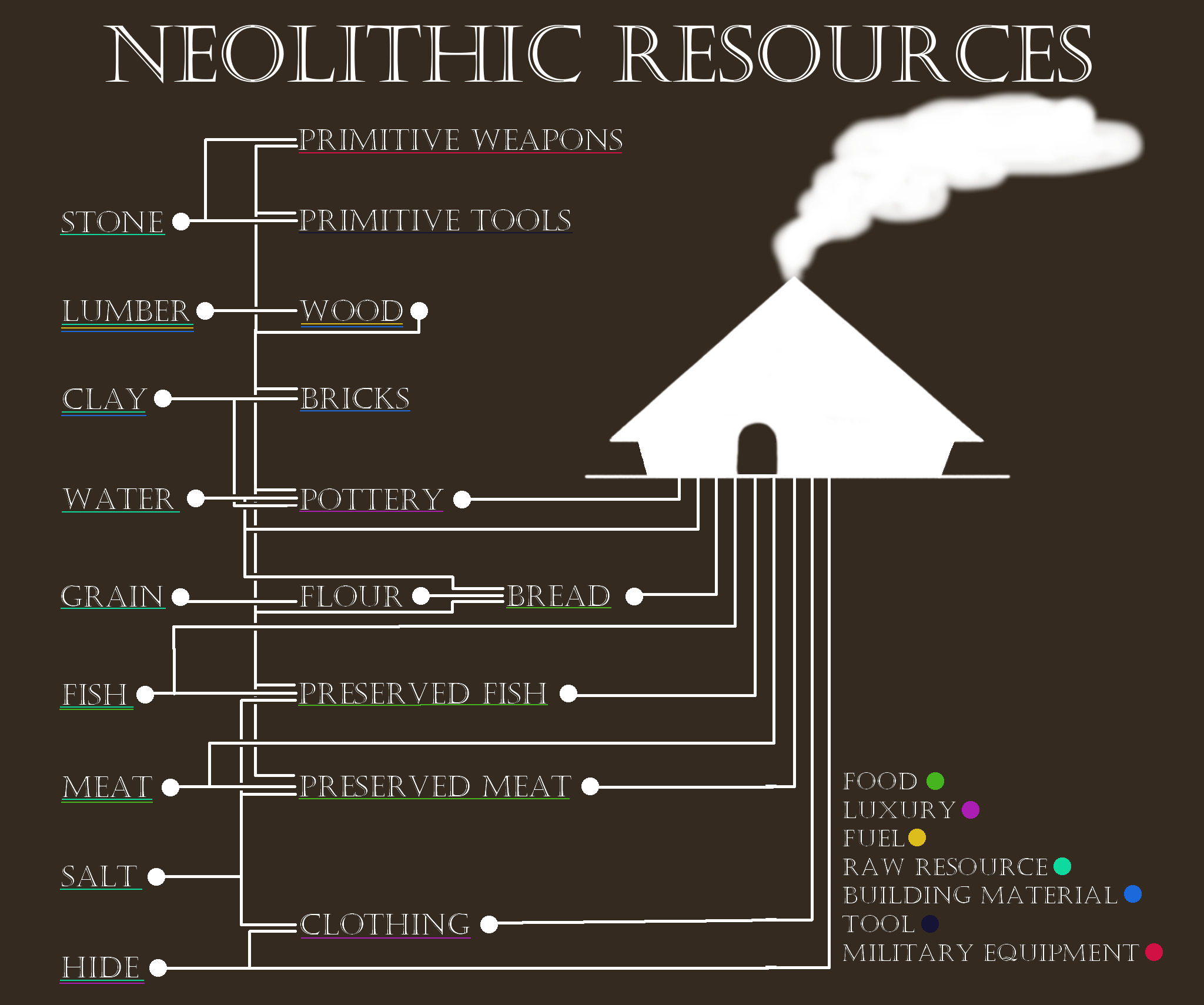 The production chains present in the late stone age might look something like this. Products such as food and clothing will need to be consumed by the population, whilst the ruler might need building materials and weapons in order to further his goals. As the ages progress and new technologies are discovered new products will be added, whilst other might become obsolete.

At the moment no game mechanics has been implemented, it is merely a procedural planet generator at this point. The world consists of roughly 1 million triangles, each covering roughly 400km2. Each triangle has values like: bedrock depth, sediment depth, water content and water flow.
Planets are created by initializing elevation by the help of multi layered perlin noise. After the initial elevation creation, a fluvial erosion algorithm is run. The erosion algorithm creates graph trees representing drainage basins. For these trees water flow is calculated from leaf to root, erosion if then calculated from root to leaf based on the water flow. Higher water flow and higher slope leads to stronger erosion.

At the moment im busy improving the erosion simulation. No real continents are this hilly and mountainous. Features which are not present here are floodplains and steppes, important parts of a realistic world. Sediment transportation is one key part in these features and will need further improvement.

I plan on making new devlogs atleast twice a month, highlighting added features and mechanic changes. If you’d like to follow the project and download the game in its current stage for free, visit the project page on itch.io.

I look forward to recieving feedback from the community.