Things (apart from time, that is!) haven't been moving as fast as I would have liked around here, and it doesn't help that I need to take on some contract work to pay the bills. However, the state of affairs with this account here is, as you've probably noticed, even worse! So, here's a short summary of what I've been up to since TP2.

Input processing has received a few bug fixes, and the configuration dialogs are a bit nicer; most importantly properly working OK/APPLY/RESET buttons, and visual feedback on the currently configured controls. Also, new, handpixeled fixed and proportional fonts; both based on Korataki, and some minor cosmetic tweaks to the GUI toolkit. 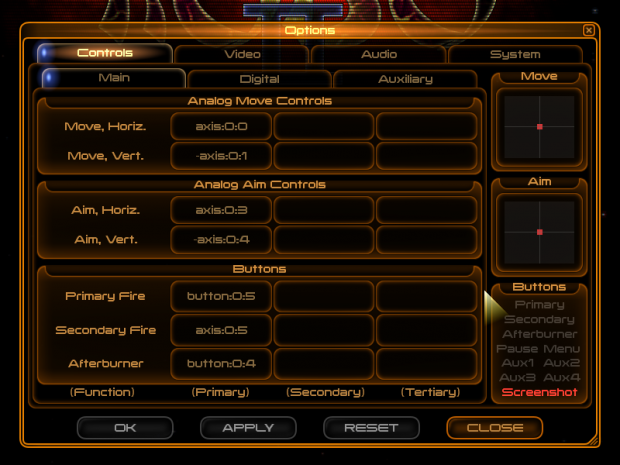 Music: Cranking up the tempo!

Started working on some new tracks, one of which is pretty much finished, as far as that goes with the current state of ChipSound. Using this one as the ingame track for now.

There's also a preview of another track in a much earlier stage. (That's how I usually start out; a basic "sound", a rudimentary song structure and a rough outline of the melodies and chord progressions I have in mind - and then I tweak it until it sounds right and/or matches my original vision.) Lots of little details left to do on that one, and the melody (chorus only so far) needs some work, but you get the idea...

And yes, both of these were handcoded entirely in ChipSound, as usual. While "simple" chords, melodies and rhythms would be quicker to record from the MIDI keyboard (which is a feature I plan to add soon), the text editor has turned out to be surprisingly effective! Thing is, I tend to "hear" parts of the music before I even start, so it all really comes down to implementing it one way or another. Less distraction is better, and that's exactly what you get with a single minimalistic tool like ChipSound. It's much like dealing with simple 8 bit sound chips, except you can use a few hundred of them if you like. Not much tech to get lost in - just get on with the music!

Well, what about the GAME!?

I've actually done some work on that too! ;-) I've been working a bit on the physics engine, adding damped springs and some other useful features, over which I've implemented a framework that allows the construction of physics driven bases by locking modules of various kinds together. 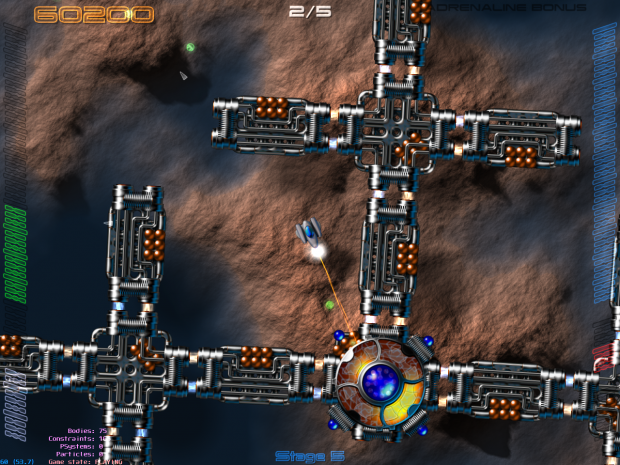 The modules are implemented as vehicles - and yes, they can still have shields, weapons, thrusters and even pilots, allowing for some true weirdness. Some indestructible modules, some modules with serious guns on them, a bunch of interesting base layouts, and this is starting to look like a game, I think!

Hey! See you are on here... Well, I'm on here because of you, lol. Thanks for the interesting site.

Well, hope I'm not getting you in trouble or anything then...! :-D

This site seems rather nice and has a lot of traffic. However, it seems like one needs to make a fair bit of noise not to fall down the lists and become invisible. This is not a good situation for a one man team using custom tech (some things just take too long), but I'll see what I can do. Unfortunately, it seems like I'll have to spend some time doing other stuff now, so the situation isn't exactly improving.