Beginner indie game developer with a strong will to create fun and innovative games like the ones in the 80s/90s, before game programming become overwhelmed by untalented programmers and money oriented companies.

Professional software engineer, I code for more than 20 years now, started in Basic and other languages on Amstrad CPC 464 then Amiga.

I'm also available for testing game and do some low-poly modelling/UV Mapping.

Game design idea of the month

as I have (a lot) more ideas than I can humanly process and create games with it, I have choose to give them publicly so anyone with enough man-power and skills could take the benefits of it and make some games a bit new from all others (especially the so-called AAA games which are more cute craps than anything else, games that are just designed to looks good, but with tons of bugs, like Batman games, poor design or just a remix of the previous episode like Far Cry 4 which is the exact same story than the 3, with a new scenery: you're prisoner, you escape, then you're free to defeat an army on your own.)

So, at it's given free here, I will probably not going deeply into it and there is still a lot of design to do to turn it into a proper game, fun to play, not to hard, not too frustrating, and good enough in the long run to keep players addicted to it.

For this first episode, this is the anti-shoot'em up !

Shoot'em up are boringly simple: kill and/or destroy as much as you can with all you can grab. And as simple as it is, this short idea as been turned into an incredible number of games: from Commando, Who dare wins, defend or die, R-Type, Mag Max, Salamander, Green Beret, Project X, Disposable Hero, Forgotten Worlds, Uridium 2, Atomic RoboKid, Saint Dragon, H.A.T.E., Xenon 2, Silkworm & SWIV, UN Squadron, Last Resort, ...

What if, for once, the player will be on the other side, and not like the friendly Dexter, but evil, pure evil and ready to stand against those suicidal who calls themselves hero ?

The common ingredients in a good Shoot'em up recipe are:

The Anti shoot'em up recipe is almost the same, with more attention to controls, as the idea here is to get control of the horde of enemies. 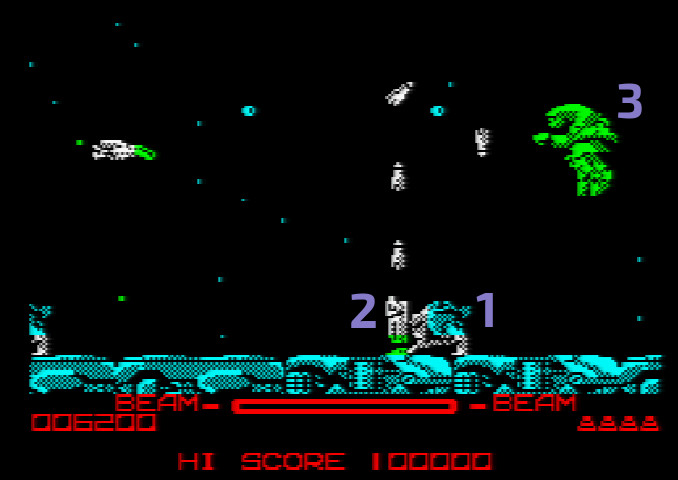 Here is an exmaple from R-Type, on Amstrad CPC:

enemies are spawned when the scenery move, in a various amount. The idea here is to tag them with numbers as on the modified screenshot above, so player can use the given key to actually control the foe and try to kill the hero. If the hero is "smart" enough like cowards in Nuclear Throne, it could be a real deal to kill. Ability to control them start a little time after the foe is visible, and is denied when it will become hidden, or of course, when it is destroyed or die, or both.

Foes could either been spawned this way, in a timed fashion, without any possible interaction or choice OR player could also have the ability to choose among a small set of foes to spawn, like a tower defence game, something like: key A = a wave of 4 spaceship which doesn't shoot, or just a little bit, B = one ground foe which can shoot a bit more, controlled by mouse (sluggish too, it mustn't be too easy !) etc

An anti Silkworm/SWIV can also be done here by giving one player ground foes, the other flying foes.

Another mock up of R-Type: 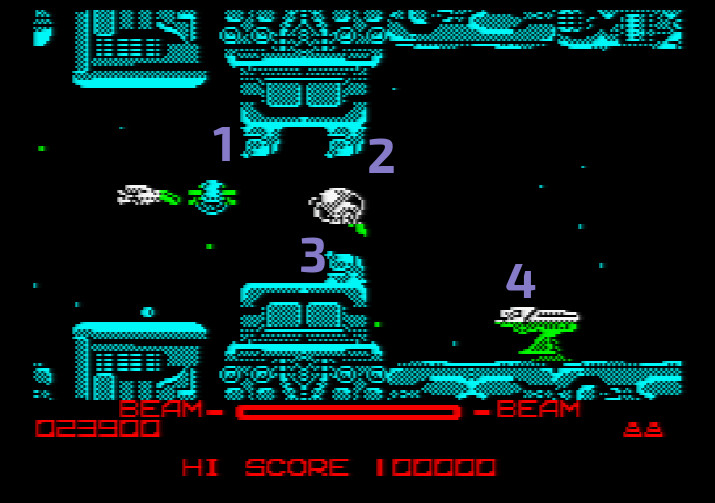 Another way to do it is, again like tower defence, is to be able to choose the kind of foes we can spawn ourselves, starting from basic ones which have low power, slow movement, very slow fire rate and gaining new units with time and some bonus (we may be able to catch bonuses before the hero does), with a cool down between each spawn of stronger and better units.

So feel free to create an anti shoot'em up, and don't forget where you've got the idea ;).