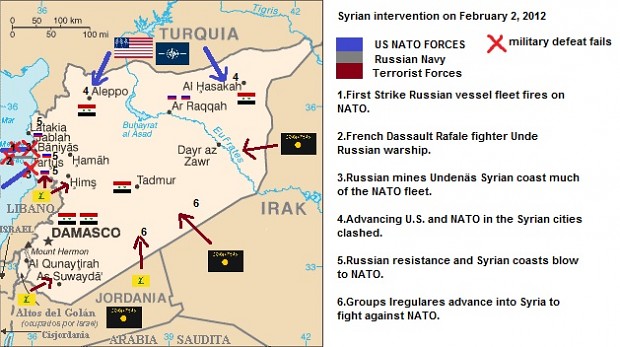 Preview: "Operation New Tomorrow" Starting the Syrian intervention on February 2, 2012.
After the nuclear attack perpetrated in the city of Volgograd and the beginning of the war between Russia and Georgia, NATO decided to intervene in Syria apartir February 1, 2012. the attack began on 2 February this year, a coalition led by France, USA and UK moving thousands of troops from Turkey to the cities of Aleppo and Al Hasakah, the more troops are shipped from Cyprus to land on the Syrian coast. The Operation "New Tomorrow" is the early hours total military failure, a Russian Battleship Syrian coast embarcaiones opens fire on NATO's maritime sovereignty by violating Syria, plus a Russian battalion established in Syria which was believed that with the boat had gone to Abkhazia to stop the advance of Georgian Navy, remained in Syria for direct orders from Moscow. Hours after NATO secretly cut off all communication in Russia to prevent the Russians take replesarias against the West. However, the communication is restored Depue days. Russian troops lost communication with Russia and decided to take matters into their own. Insurgent groups show their support for the Syrian regime and Syrian Jihad decides to support a finding of NATO.