A zombie infection is spreading in the city...
Use your arsenal, ranging from modified viruses to good old explosive warheads, to save as many humans as possible. Unless you are the mad scientist responsible of that outbreak ? Collateral victims can't be avoided though.

Will those 20 different weapons and devices be sufficient to handle the 5 different challenges ?

In that game, you'll mostly play short but intense sessions, either in realtime or in turnbased. A wide range of gameplay is allowed by letting you choose from a range of to themed weapon lists such as "Random", “Biological war”, “Army men”, or “Demolition man”.

If you like it, have any suggestions, spotted a bug or wish to follow its development, check its Indiedb page or send me an email !!

Built on the original code from Kevan and Hardcore Pawn, with a large inspiration from Atom Zombie Smasher.

After a few months of slow but steady work, that new version includes a new user interface allowing a better game costumization, and 5 different challenges. For now, appart from minor tweaks on attractors and repulsor, the gameplay has almost been left untouched. 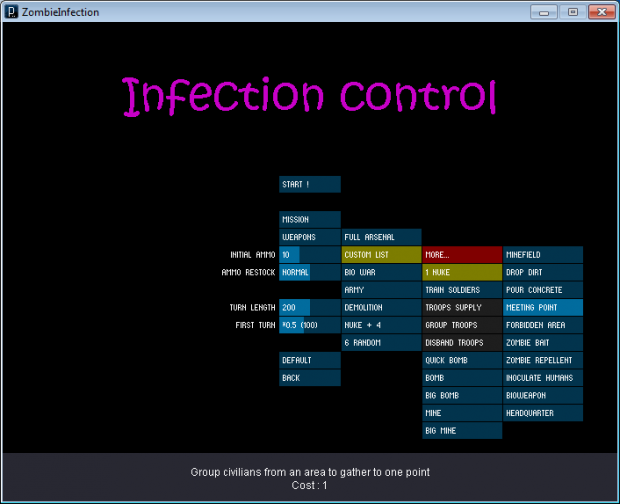 There is now a start menu ! Wouhou, Zombie Infection almost looks like a real game ! From that menu you can set different settings such as the speed, number of initial ammo, turn length,... Also, information such as weapon descriptions is also provided when hovering the buttons with the mouse.

There is also now an end to every mission, and you can choose from 5 different challenges (survive untill the army comes to your rescue, try to wipe the infection out of the map without killing too many people, or even try to kill as many people as possible.) 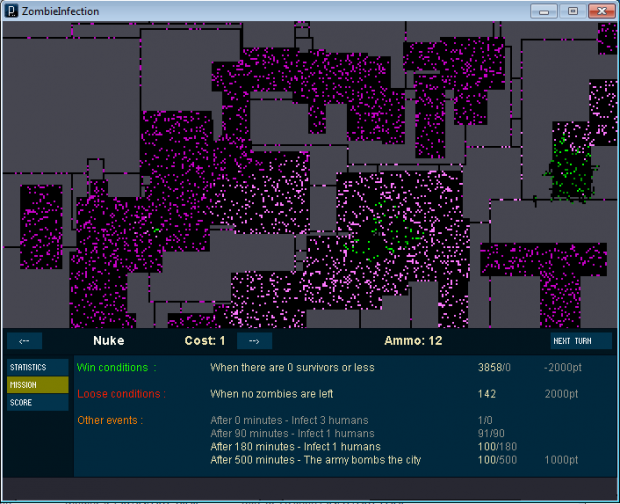 Now that the bases for the UI have been set, I will now go back to gameplay. First, I'll do some work creating new weapons and balancing existing ones (such as "Meeting point" which I have never managed to use efficiently). Expect to be able to give some kind of movement orders.

At some stage, I should also find a way to add some crude path finding to zombies, so they can track humans from a longer distance.

More fun (in my opinion), I should dive again into the beings behaviour to create new zombie types, ways for the infection to spread, vaccines, doctors,...

Finally, the present structure allows easy translation. I will write a french one, and contact me if you want to do your own (I don't know yet if it would support Cyrillic or other alphabets. But we should try...)

Infection control is slowly evolving with most development being carried out on user interface and providing more information to the player. Once this...

V 1.2 is out. With 18 new weapons (send viruses at those nasty zeds). Now online or in stand alone applications.

I have just released the version 1.1. The display is twice bigger, so playing in "turn based" mode should be much more comfortable.

This looks awesome, I would totally play it if it's on android :)

So do I! Who knows, maybe I'll make a remake for android...

I always sucked at strategy games and this is no exception :P I tried both action and strategy, zombies kick my *** every time!
But pretty cool game nonetheless :) I'm curious to know the working strategies other players are employing.

Hello diegofloor !
Well, there would be different strategies depending on your mission and weapons selection. I should definitelly make a video...

Usually, the main target is to stop zombies progression. So there is no point fighting behind the line (where zombies are). Most of the time you would have to aim in the population, close to the zombies' progression line.

Soldiers are badass too to stop or slow the progression.

I think it would help if the zombies dug slower or something...or soldiers moved less erratically, so that making and using a choke-point would feel helpful. Admittedly, this might favor a slower game, which you have said was not the intend...but it's just an idea.

Is there a way to change the game speed?

Not in this version. But it is already included in next one.

Oh and another thing that would be cool would be to adjust the map size, to say, 1280x1024

I had planned to include it in this version (V1.3), but I ran out of time. So maybe next version... But it is planned.

Gadgets and Dragoons Turn Based Strategy

The 8 Sins Turn Based Strategy