Zero Gear is a physics-fueled, multiplayer kart combat game. Deck out your kart and character before jumping into one of many different game types. Awesome kinetic items help to spice up the action. With an open scripting system for creating new game modes, as well as support for user-created maps, karts, characters and more, you could experience something new every time you play. The potential for tiny vehicular mayhem has never been so humongous! Boost, flip, spin, tumble and slide your way to victory! (currently in beta on the PC platform)

A new version of Zero Gear is live on Steam! Along with some bug fixes, we also have a new map, “Aqua Race” included. Check it out! 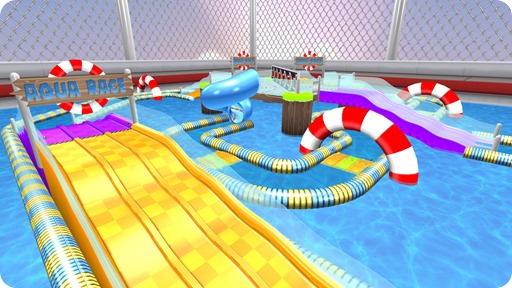 1.0.2.2 Change Log :
* New race map added: Aqua Race
* Stat based achievements will now trigger properly (Drive 500 Miles, Flight of the Falcon, etc)
* Dedicated server no longer uses NAT punch through (if you were having problems with lag on servers, try connecting to a dedicated server now)
* A LAN server will only be listed once now if there it is also an internet server
* Invites to dedicated servers are fixed
* Plugins now supported, see pluginScripts.txt in the server directory and Assets\Scripts\Plugins for more info
* AdminRemoteControl.lua plugin added from community member Chris M.

We just made another quick update to Zero Gear live on Steam! This one focuses mostly on improving controller support, as well as a few bug fixes.

Picked at random, 4 people will be winning a free copy of the game Zero Gear.

January 12th marks the official release date of Zero Gear! For the low price of only $19.99 you can beat up your friends in 18 different levels, in customizable...

Starting today, Zero Gear is available for pre-order! Players who pre-order will get 25% off the price of the game, as well as immediate access to the...

Play as Ralph from Wreck-It Ralph. Made as a prototype for testing purposes, glitches are expected. Maybe ill fix the "Still" animation if I ever get...

I uploaded the samples files for making kart for Zero Gear. Adding a tutorial to make your own kart.

Sun lotion, hah! Why not ice cream! You can smear it anywhere you want!

Its a hat for Zero Gear. My first piece custom content for the game so far. Why does the summary need to be 50 words long...? I guess i'll never find out

It's the Unoficial Zero Gear Map Editor tool made by Eikester. With this tool you can make race track easy. Install: Extract the zip where you want on...

The biggest problem I have with this game is the lack of ability to save the characters I create in the garage. I'll spend hours designing my little dudes and I'd love to share them with the community. Plus my girl friend always wants a different one then what I make lol...

Are you guys going to add support for gamepads? I was unable to bind my gamepad in the menu.

Hi, NimbleBit team, come on you guys don't abandon the game I'm about to buy it from steam, just waiting my friends to get the money to buy the four pack, plz the game is so great make more maps personalization etc.. don't give up the game its good but keep updating it even if that means Paid DLC's

Where did they say anything about discontinuing the game?

Congrats on getting your game released on Steam guys! I can see alot of hard work was put into it. I wish the best for you. - Will :)

I would like to see FPS-CameraView in this game 8-)

I agree... Nice picture BTW I love plants vs. Zombies!