YIIK is a Colorful 3D JRPG set in the 1990s, about eight strangers, a mysterious woman who vanishes in an elevator, and weaponized Panda plushies.

We got to talk to Andrew Allanson, one of the developers behind YIIK: A Postmodern RPG, to discuss their most recent release and learn a little bit about their upcoming project, Starstruck.

My name is Andrew Allanson. I’m currently working on a game called Starstruck.

My most recent release is a game called YIIK: A Postmodern RPG. For YIIK, I was the co-director, lead composer, script writer, and co-level designer.

I started making games when I was nine years old. I got really into the idea of making a game once I realized how they were made, so I was I think I was playing Pokémon Red, and I kept thinking you, “How does this possibly work? How how does the game know when I’ve done something different?”

I remember asking my dad, and he told me that they program video games. I asked what that meant, and he said my uncle was a programmer, so I went and asked my uncle about it.

He told me that I wouldn’t be able to program, and that it was something that only adults could do.

That really pissed me off, so I went to Barnes and Noble, and I bought a book on programming and and I started learning QuickBASIC first, then I went to Visual Basic and C++.

My brother and I taught ourselves programming from from books, and we started making small games, like Brick Breaker clones and things like that.

Our first like thing ever finished was something called Z2RM, which was a Zelda II remake based off a screen shot we saw.

We never played Adventure of Link at this point, but we wanted to see what the game was like, so we scanned in a screenshot and made our sprites based off the scan. 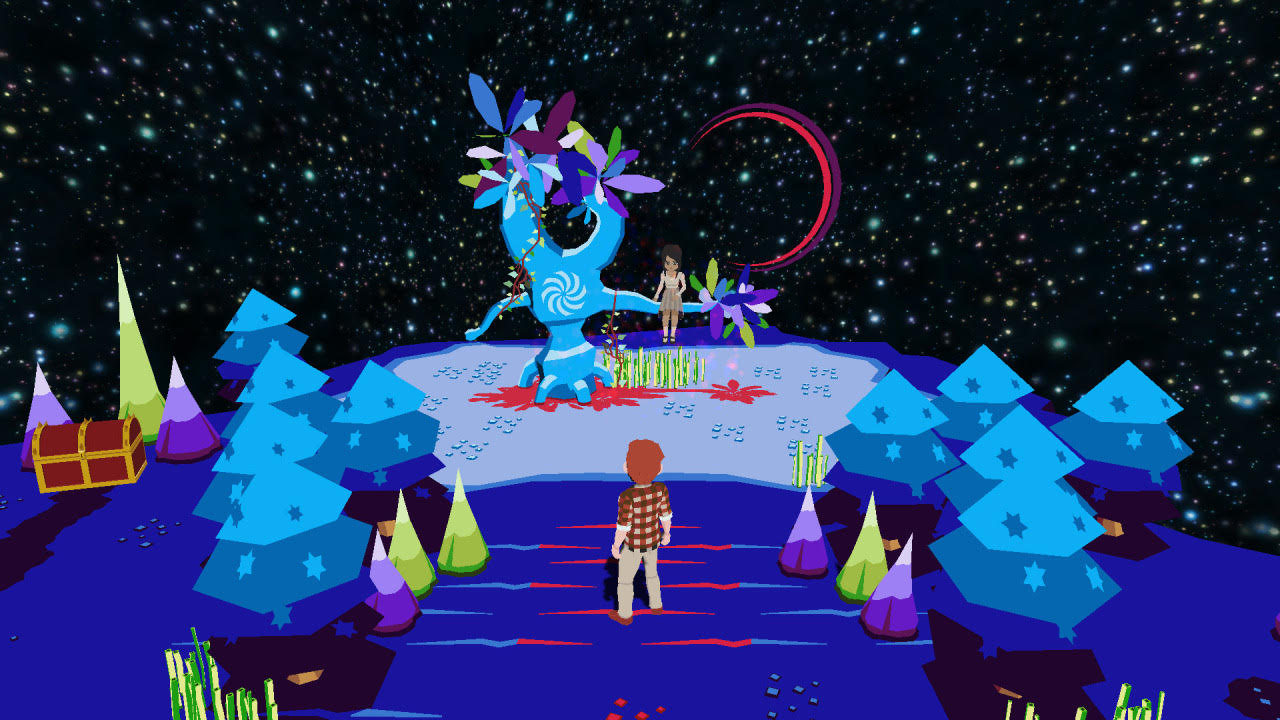 If you were thinking about doing it, don’t do it. It requires so much content and the expectation of the level they’re going to be at in terms of quality.

Even an RPG that isn’t AAA, but maybe a B- RPG, people have the expectation of full voice acting and fully animated cutscenes.

If you’re making an indie game, making an RPG is just such a huge undertaking, I mean, that’s why it took us four years to do it.

Honestly, it could have been more. If we had infinite money, we would have taken six.

I can’t imagine that will ever work on anything that doesn’t have like RPG elements, at least from a narrative perspective, even if it’s not like a straight RPG with leveling up.

There’s something about telling stories through RPGs that’s just so compelling to me and always has been ever since I was a kid.

For me, like the best type of games were always the role playing games or ones that had sort of role playing element, like Londoner. 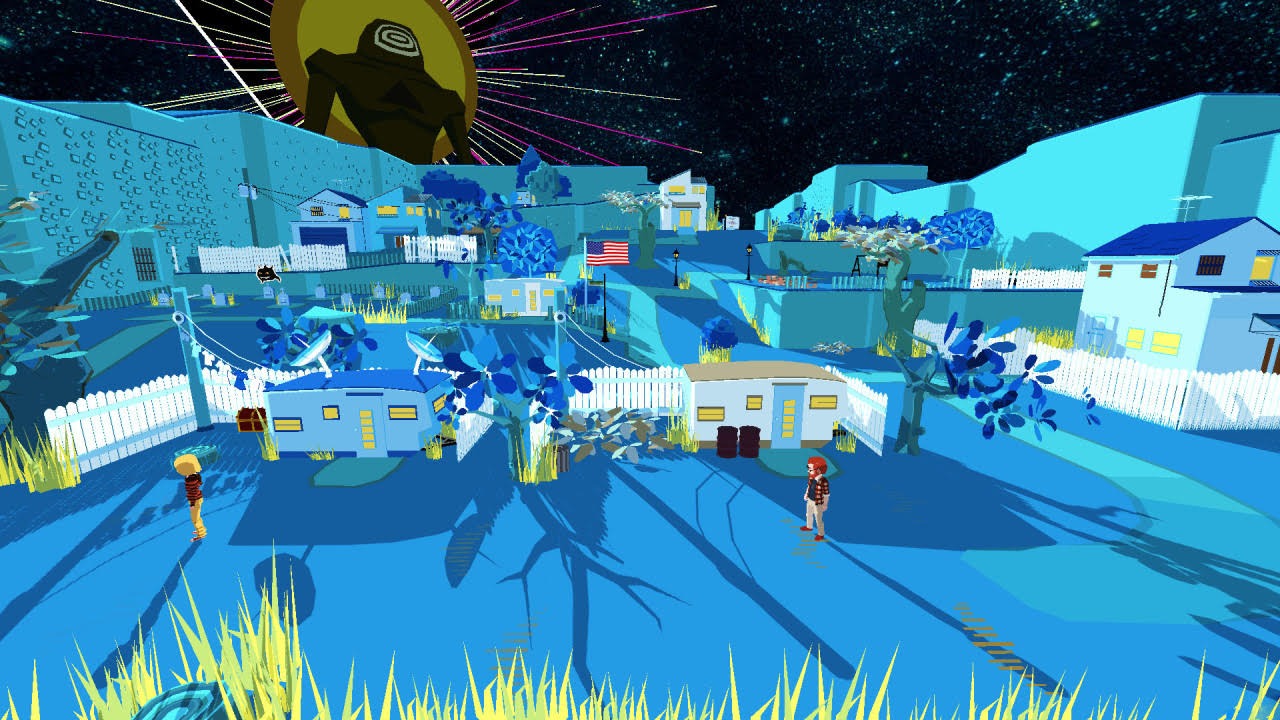 With YIIK, I got to live in that world for 4 years, I get to think about all these characters, and even the minor characters and all the different locations, I got to know them so well.

I probably know the areas in my game better than the town I grew up in.

How did you deal with the controversy after YIIK released?

There were a lot of trolls and confused people spreading lies that the game is hateful.

People see this hate and they stop seeing the developers is humans, and they feel like they can say whatever they want because they’re bigots or they’re transphobic or that they were profiting off someone’s death.

It got to the point where one streamer put the GOG download on Dropbox and dropped the link in their Discord for about 20 minutes before they realized what they were doing was illegal.

It’s so easy for people to dehumanize you as a developer just based on the hate around the game.

I wish I was more of that pure artist type, where I could take enjoyment from making something so controversial that set so many people off, but that’s not my personality.

I’ve known other game developers who have said they wished they could make controversy with their games and upset people.

For me, that wasn’t the point. If I wanted to upset people, I could have done a much better job.

It definitely was depressing for for a couple weeks, but then I saw sales numbers, and they were were pretty good and we were happy with them. So I felt like I could live with it.

The only part that disappointed me was when I saw other developers sharing the misinformation.

It was like, “Don’t you understand? This could have been you, that somebody could have doctored a screenshot from your game to make it look like the game endorsed things it didn’t.”

It could happen to any game. It just takes one tweet for people to say that they would never play the game.

The first impression is so, so hard to fix and I think other developers really should be wary of retweeting or spreading that stuff.

At the very least, reach out to the other developer and ask if it’s true first.

Moving forward, what do you want to do differently for future titles?

I think what I’m probably going to do is I’m going to probably try and tell a story that takes place in a world very different than our own, that way I can explore some themes that I think will be easier for people to accept if they’re not necessarily done through human characters.

I’m probably going to make my next game a little less dialogue heavy and focused a bit more on storytelling through level design.

I probably won’t do another game set in modern day for a long time.

The biggest takeaway for me is that if I’m going to make characters that aren’t likeable, not to make them the main character.

I’ve always found characters who are unlikable, very interesting, because when you think of an unlikable character, people often think of, say, Sherlock Holmes.

But with Sherlock Holmes, he’s not that unlikable because he’s always depicted as being very good looking. He’s very funny, and even though he’s like an absolute dickhead to everyone, he has this like savant-ism that can save the day, so everyone still likes him.

I wanted to explore what would it be like to be a truly unlikable person who needs to somehow do something to save the world, that goes contrary to his personality, but he doesn’t have any redeeming qualities.

And I did it. It was a pretty big experiment because Alex, the main character in YIIK, is not Sherlock Holmes. He’s not super charismatic when he’s rude to people, he’s just really selfish and hasn’t grown up yet.

I think it went over okay with people who beat the game, I think people who finish the game see Alex through the redemption arc, and they often tend to end up relating to Alex more than they thought they would.

Some misinformation going around that the game isn’t aware that Alex is flawed, so I think ultimately it went over like a garbage fire, but some people understood what we were trying to do with the story.

Another thing I did learn from this process is that community managers are your friend.

Every game needs some kind of funny community manager.

One of the testers from YIIK handles the Steam page for me now, and our Steam page is actually pretty good. It was a toxic wasteland for the first 24 hours, now it’s all fans of the game.

He reads through everything and answers the questions, and now I’m removed from that process.

I think that for the next game, that’s what I should be doing. When the release of the next game comes, I should have a community manager that’s focusing on all that stuff.

I recommend that to every indie, even if it’s just a friend who can help manage Twitter for a couple weeks, and they know how to avoid saying anything offensive.

I think that’s a really, really big lesson I learned from that.

What are you working on now?

We have a patch coming out for the Nintendo Switch version of YIIK coming out that cuts the load times in half, rebalances the battles, and improves the frame rates for the entire game.

We took in all the feedback people have said about certain skills not being as balanced and certain characters not being as useful. 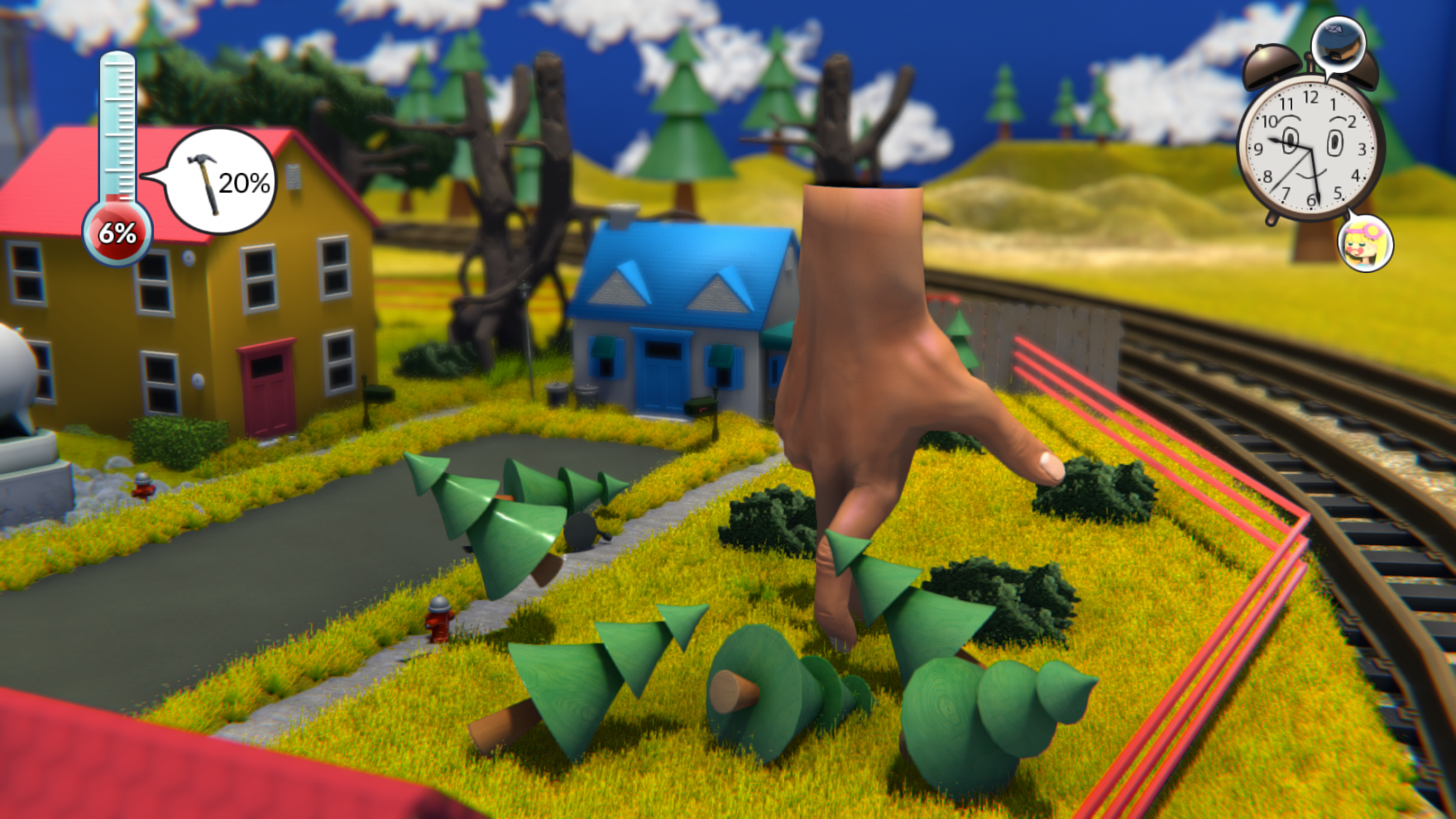 Starstruck is a really cool game being developed by Createdelic. It’s a rhythm adventure game that sort of mashes up PaRappa the Rapper or Gitaru Man with a little bit of Katamari.

You play as two kids that are trying to change the world of music and a time-traveling hand that’s sent from the future.

I’ve been working on that game for about a year and two months. I think we have about another nine months of development.

Starstruck will be playable at PAX East, so anyone who will be at PAX East should be able to play the game there. 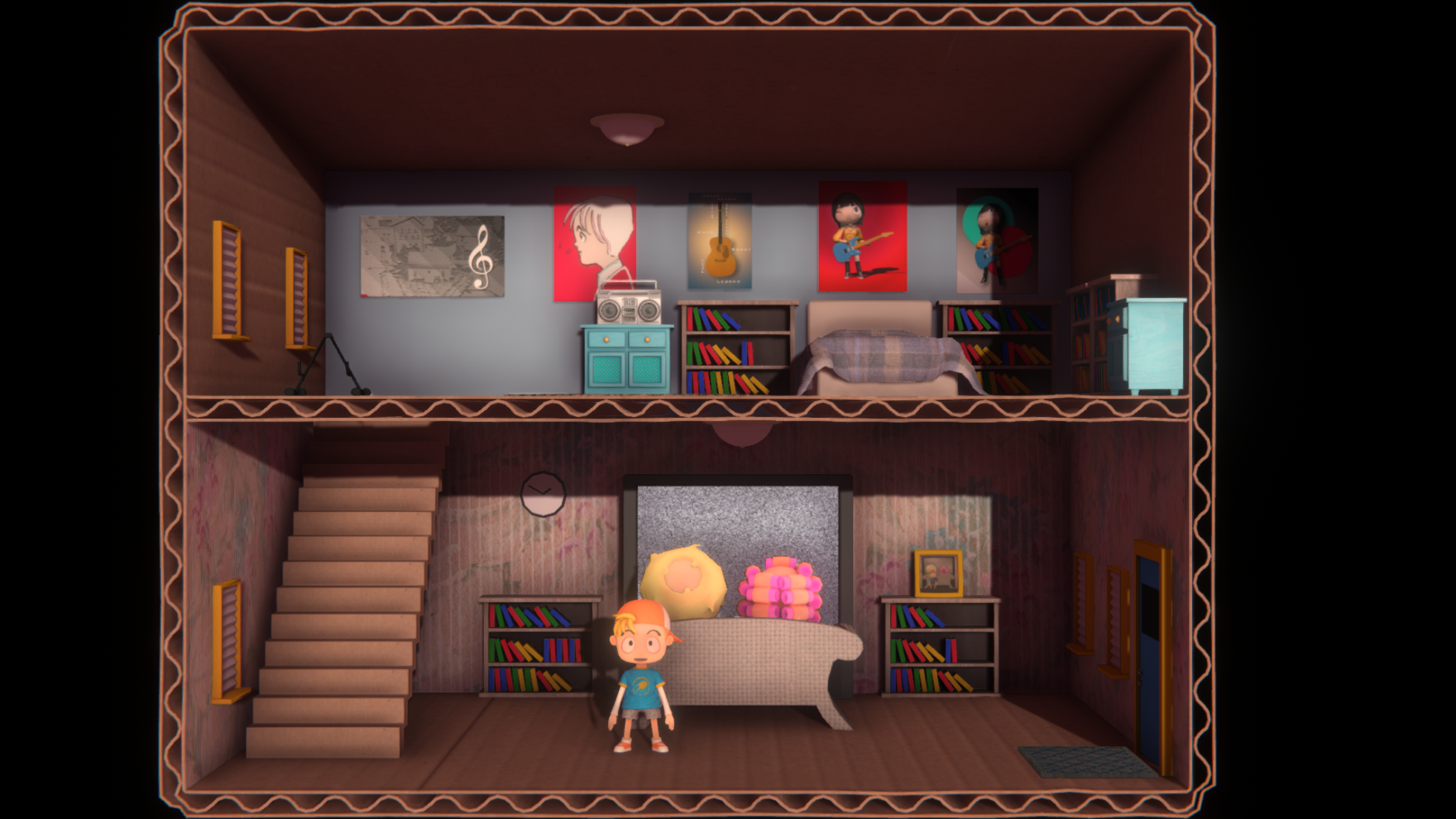 For Ackk, we started our next game, so we’re doing part time on our next game: building and finishing up our prototype, and then we’re working on Starstruck full-time.

My brother, who worked on YIIK with me is doing the graphics and character design.

The guy making Starstruck was a big YIIK fan, so he poached the main team.

It’s got such a great art style, and it’s funny because I think a lot of people would be shocked to find out it’s the same artist.

It’s higher poly than YIIK and has traditional texturing, but it still has Brian’s personal style.

We divide up our week: I work from around 8AM to around 4PM on Starstruck Monday through Friday, then Monday, Tuesday, and Wednesday, Brian and I meet up after working on Starstruck and we work on the prototype for our new game for about 6 hours.

The prototype is pretty much done. It’s about the first 20% of the game, so it’s a pretty substantial prototype.

It’s a very different type of game. We’re trying to create something (and this is probably a really bad idea) that is genre-less, something that people would play and not know what to compare it to.

So ultimately, people are probably going to be like, “This isn’t like any other game I’ve played before, 0/10,” but we’re going to try it, and the main character is going to be really likable.

It might end up being shown at one of the December game events. If there is a PlayStation Experience in 2019, maybe it’ll be there. Around December, I imagine people will start to see the game. It’s not going to take four years to make this time. 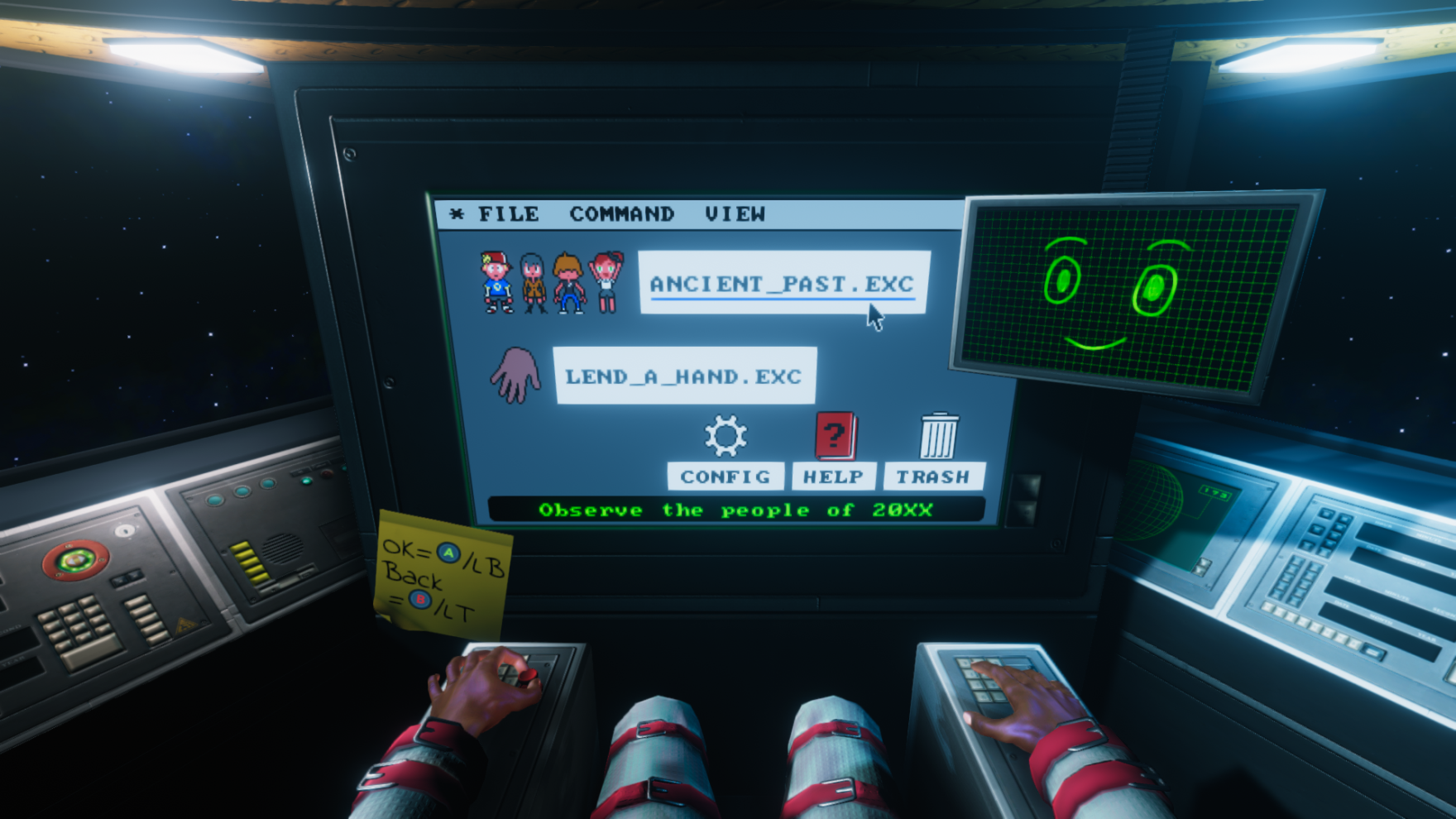 Starstruck is on Indie Boost!

Verified content creators and press can request keys for Starstruck or interviews with the development team through their game page.

Today’s blogpost is going to be a bit different. First of all, we’ll be covering two games.