X-Bomber the Game: a Freeware 2D Arcade/Action Space Shoot-em-up based on the Japanese Sci-Fi Star Fleet 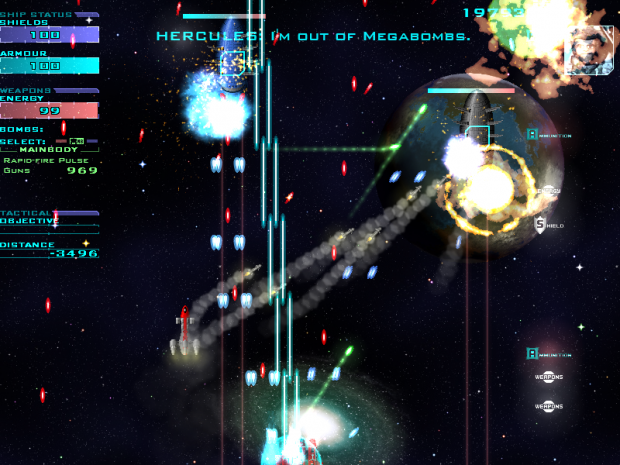 Pretty interesting game, though maybe a bit rough around the edges in parts. Did a review of it here: Youtube.com

Thanks very much indeed for uploading the recording!
These are, really, very interesting and helpful from the 'maker's point of view.
I would have commented on YouTube as well but I don't actually have a Google account anymore.

I was rather concerned to see the glitch in the training mission where the lasers from the friendly fighters stayed/stuck on-screen.

If you press the Airstrike/reinforcements button (A), the training skips, like Professor Hagen mentions in his dialogue.
As the training progresses, your other weapons are enabled by enabling the relevant groups in the game's code/events.
This wasn't getting done when the training was skipped over, however.

Thanks for illustrating this. It is now fixed for 0.84d.

The dialogue feature had already been improved a lot for 0.84d to make the content more easily readable while playing.

The game does have a bit of a learning curve, which is why it needs the training element in Mission 0.

You do have a lot of other weapons on X-Bomber, aside from the specials, which you can access using select (shift).
If shift is held down, it launches the fighters and triggers the Dai-X junction sequence when held down again.

In terms of the bullet and enemy chaos, there is a lot going on but the player ships are very resilient.
This is partly to reflect the TV show that game is based on.
I couldn't make a 1-hit-kill game (like Raiden) of X-Bomber since the X-Bomber ship in the show (and the Dai-X) could take a huge amount of damage from large numbers of enemies and still keep fighting.

Balancing-wise, the Mission 0 boss is reasonably tough. It will take a long time to erode using the orange spreadfire gun since this is more effective against swarms of small enemies and feeble against large targets.

You can check out the music in the mp3 folder and see what's there.
This is very-much a one-person project and I don't have the means (or talent) to compose anything that anyone would want to listen to. So a lot is taken from Gundam and other places.
Anything that fits mood of the game has a chance of getting pillaged.