Welcome to the World of Terathan....
I'll first start by giving a quick overview of what Terathan is and then get into more detail below. But this is the QUICK TEASER read section :)

Terathan is an online multiplayer role playing game based in a medieval times type era. We are taking Terathan to a new level by allowing Players to access Terathan from many platforms including:

The best part about all this is that players from all platforms will be playing in ONE unified world. So players from Facebook can interact with players from Ipad or web browser and so on.
What's this "HOUSING MODULE" about?
Players of Terathan will each start out with a plot of land with a tent and cozy campfire to own. As players progress in the game and earn money, they will have the opportunity to purchase deeds for houses ranging frm a small one room shack to a large Castle.
Players will have complete control over the design of their houses as they see fit. Example - Walls, windows, color, roof, decorations, etc. Players who excel in the "Crafting" skill will be able to craft housing furniture and add ons. These items can be used in your own house, or sold to other players and NPCS via the Ebay style Marketplace for game cash.

The best part of the housing module is it allows players to put their own creativity in designing their home and land and to be able to show it off to other people. With the Facebook's publish and share API, Terathan will allow players to show everyone their works of art, participate in design contests judged by players, and so on.

Are there Any Cool Places to Explore?

From Concept Drawing of an idea: 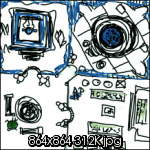 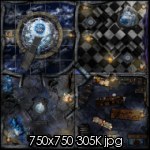 Now this is just a small preview of the map, to see how detailed this map is, click on this MEDIUM resolution watermarked version of the map.

Now that was only the Medium resolution, Can you imagine the detail that went into the full resolution image?

Now your standing in this Shrine:

Just want to give you an idea on how in-dept the work is on this project. I want players of Terathan to be drooling over the shear beauty of what they are looking at, even as they are being defeated by one of Terathan's monsters.
Player Skill and Crafting System
Players of Terathan have the ability to excel in a large number of Skills and/or Trades. These skills take alot of time and practice to master, making players understand the value of becoming a master in a certain trade. For example, becoming a Master Blacksmith takes many months of hard work, but his weapons and armor are near priceless. Master Blacksmith's can forge weapons made out the most valuable ores and magical items. These items can be used for monster/dungeon assaults, or can be sold in the game's Ebay Style Marketplace.
Now here's the catch which will balance the game and people will be working together, for this Master Blacksmith to forge weapons made from the rarest of ores, he needs to obtain this ore. Well only a player skilled in the craft of mining, and has reached a high level in this crafts, will be able to mine for this ore.
So the Blacksmith needs to purchase the ore from the miner, the miner makes money and then the blacksmith sells his wares to make money. Same goes for other trades like Carpentry and lumber-jacking.
One of the funnest features I believe is the skill "Animal Taming". Players will be able to tame animals of all sorts. Some can be used for riding and some can be used for defense/attack. Best part is when a player becomes proficient in taming, he can start to tame monsters even up to some of the high level dragons. These monster pets can greatly assist you in combat and defend you against attacks.
There is so much more to "The World of Terathan"

THANKS SO MUCH FOR CHECKING OUR MY GAME!!
Please feel free to comment with suggestions or critique. I just had my project accepted on Kickstarter.com and I am looking forward to see how it does. If you want to check out my kickstarter page, please go here:
Kickstarter.com

To promote World of Terathan and grow its popularity (top games), use the embed code provided on your homepage, blog, forums and elsewhere you desire. Or try our widget.

Hmm looks amazing, i'll be keeping an eye on this. :o

Emperor's Forge is a massive online, dynamic, always evolving multiplayer game, set in a medieval fantasy world where anything will be possible. Hello...

Zeboaz is an online survival game set at the dawn of man. You awake with absolutely nothing and must find food, water, and protection from others. You...

Knight;s of the Lord's Realm

Knights of the Lord's Realm will be the next big MMORPG. With its unique combat system and never before seen building system. Lead the race to save the...

Medieval Europe is an unforgiving place at the best of times. Danger and disease are ever present and survival is always a challenge. But now, Europe...

Gloria Victis is a MMORPG with an emphasis on realism, set in a low-fantasy medieval open world. Enjoy skill-based non-target combat, open PVP with territory...