WazHack is a procedurally-generated dungeon game. This is not a button mashfest - you can spend all the time you need contemplating your actions. With over 300 different types of items to be found, there are many different ways to deal with the more than 130 different types of monsters. You will have to use your sword or staff as much as your inventory. It's not a game of plodding to the end and winning (though it is winnable), it's about experiencing the attempt... and learning lessons that will help your next valiant attempt!

Finally, a multiplayer roguelike that does not resort to the realtime treadmill to solve the player synchronization problem.

Beta5 has just been released on wazhack.com!

For years I've said it's impossible to add multiplayer to a roguelike and it still be a roguelike.

A critical factor separates roguelikes from other genre. It is not a grid of ASCII graphics (WazHack proved that on day 1), nor is it a wealth of different items and creatures.

It is the way time passes only as the player plays.

It is this factor of roguelikes - giving the player time to consider their actions - that makes the wealth of items useful. For most non-roguelikes, the main items I seem to use is a pile of hot-keyed health potions (think Torchlight: the almost roguelike).

So consider a multiplayer roguelike. How can multiple players be in the same dungeon with time passing in fits and spurts as each player alternates between running around or staring at their inventory? It would be infuriating waiting for other players to ponder their options. Other games have all "solved" this by putting everyone on the same realtime treadmill. But I say the game is then no longer a roguelike, but just a twitcher with far too many options to be playable. Is there another way?

You be the judge, but I think I've found the solution with WazHack beta 5.

Full details are in the help, but basically, co-op players all play the same random dungeon, and encounter the same creatures, but they work completely independently: all players have to kill the kobold in their instance of the dungeon, and they each get all the different loot in their particular instance.

How is that multiplayer? 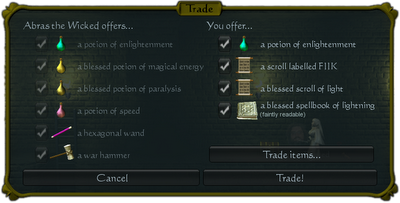 Well, again: you've got to play it. The fun really starts when you are trading equipment to help each other out, using voice chat (eg. Skype or Mumble) to warn of nasties and collaborate on developing a balanced "party" of players (one wizard who knows the Identify spell is a powerful ally - give him your spare healing potion!)

Item identification is also shared. If everyone has a scroll labelled BAYOWOKI, only one player needs to read it!

That's all "co-op" mode. There is also a "competition" mode, where everyone also finds the same loot in each room and from room creatures they kill, but there is no trading. Who can get the furthest?

So that's WazHack multiplayer mode. Check it out. To convince you, there is now a 3-pack of accounts for just $5.

This is just the first iteration of multiplayer, and I'm sure there are bugs and sorely needed features. Be sure to report any bugs you find, and post suggestions. One item already on my to-do list is a mage staff that can store spells (and hence be lent to other party members!).

As always, this release include a host of bug fixes. I'm keeping a record of you white-hat hackers who send me bug reports of a "cheat" that makes the game too easy. You'll all get a special badge or achievement or such some day! My policy is to leave crazy wins/scores in the list until I ship a fix for the reported bug.