Two Weeks in a Laundromat

You wake up in a laundromat. You have no idea how you got there, or even what you were doing before you came to be in such a terrible place. The front door is locked, the front window boarded and broken. Your only option is to descend into the basement, hoping for an exit. Lo and behold, the basement is a rather large entombment of hallways. Hope builds, as you follow exit signs and signals, hoping to find a way out. Eventually you come to a ladder. It looks like you have no choice but to descend. Two weeks is a horror game about exploration, claustrophobia, anxiety and pressure. You have exactly two weeks to find your way out of this quantum hell-prison, and each time something unfortunate becomes you, you are thrust back into the laundromat, another day gone and another attempt to be started. Will you make it? CAN you make it? Its up to you.

On the status of the game

With the new engine, everything is exactly where it should be; both from an OOP standpoint and a "good practices" standpoint. Bounding boxes are generated from volumes specified when creating the mesh and creating a menu, or the world, is as simple as overriding the class and creating a new instance of it. I am actually pretty proud with how this has turned out.

As for the game itself, well, I've completely ripped out everything. I've started learning Blender so I can make assets myself, which is hugely important. I've started with trying to make a dryer stack: 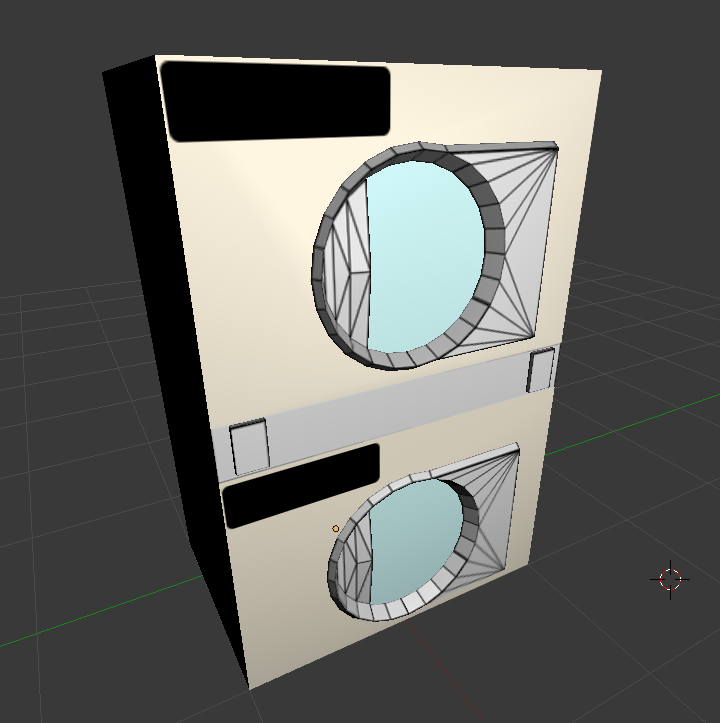 As a programmer I don't think its too bad, ugly texturing aside (The texturing I am still working on.) I might have made it too low-poly considering I won't need that many, but oh well. I am pretty sure I can easily expand it if it looks really awful in game. Right now it does, but thats just my poor implementation of a lighting shader.

Speaking of shaders, the preview image for this article is a sort of Anaglyph shader I put together after seeing some of the stuff done by Lunar Software who have some truly impressive visuals. I'm not sure how big their dev team is, but regardless, they have a neat style.

So enough rambling I think, I just wanted to say to anyone that is listening that I'm working on this again. In the future expect more gameplay pictures and a complete disregard for the old ones. If theres any interst in the game engine itself, I'll probably open-source it. There are no industry secrets here.

So this is a general status update, because I need something to put on the front page. I hate seeing an empty page. I've tentatively given myself a goal...

I think this is dead?

This made me laugh:) It actually looks like a great puzzler and the concept is funny but intriguing as well... its different:) TRACKING! Keep it up!

Why wouldn't a person with any sense just tear the door off or kick it down. Who would ever thinking about going down to get out? I'll track...but with caution.

I'll admit it is a little odd. The story will be threshed out a little more once I can call the game close to finished. Right now I have only a rough idea of what I want, albeit with a few flaws.

yeah, id just tear the boards on the window down, and crawl out... id say, maybe you could make it so you start off in a cave, and the entrance collapsed, that way you really cant get out, unless you go through the cave... and of course, make it so you got a flashlight.

Tags
Embed Buttons
Link to Two Weeks in a Laundromat by selecting a button and using the embed code provided more...