Twin Flames is an action 2D platformer with a lot of roguelike elements. You can choose to be either one of the siblings and must defeat the other one. However, there’s a catch, if you take too long to reach the top of the Time Tower, your powers will die and the other god will rule time forever. So this is not only a battle against your enemies, this is a battle against time itself.

We gave Twin Flames an identity and flavor of its own, but we also took some notes of our favorite games and added what we liked most about them: the weapon and item variety of Symphony of the Night, the crazy fast paced combat of Strider, the time limit and sense of dread and pressure from Majora’s Mask and all the roguelikes elements of games such as Spelunky or The Binding of Isaac. We also took a lot of core concepts from The Kybalion and The Zohar, so you’ll be able to spot a lot of cues and references to those works.

You have limited time, or the dawn or nightfall will kill you

The two brothers Joachim (the sun god) and Boaz (the moon goddess) need to kill each other for all eternity to keep the cycle running. Will you be able to break their tragic fate? 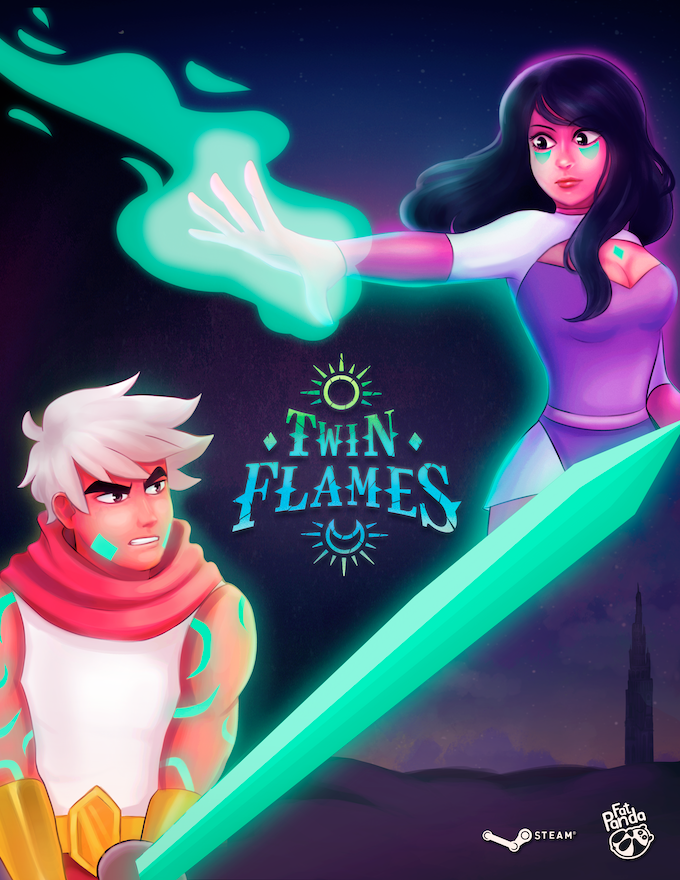 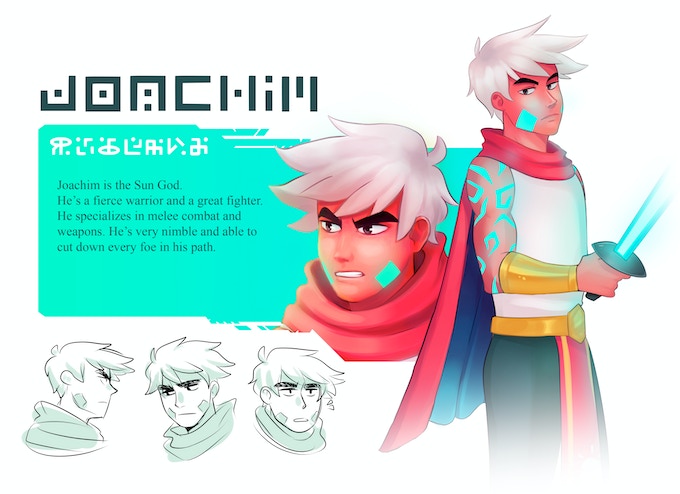 Joachim has an arsenal of weapons and sub weapons.

We designed the weapons to be all different and fun to use and change. Some are more traditional styled swords or spell books, but you may find some crazy ones too… 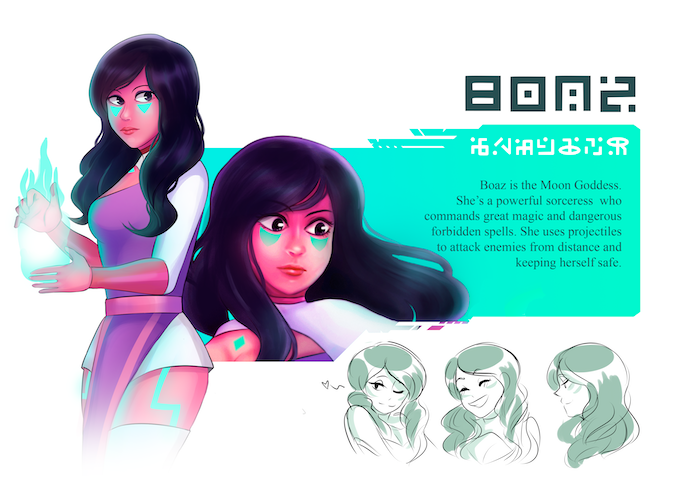 Her basic attack is very quick, and you can charge it to release a deadly strike!

There are also a lot of different spells, which act as projectile weapons. With these you can shoot your enemies to your heart content until they turn into dust.

Lots of items and treasures to collect. These add different status effects, buffs and debuffs to your character. They can range from very basic stat bonuses to unique and powerful new abilities. They also stack, so as long as you keep looting, you’ll become an unstoppable killing machine.

HacknPlan: The Asana for Game Developers!

As you know, making a game is not as easy as one may initially think, it involves a lot of different tasks that are often connected and sometimes must be completed simultaneously. This can prove daunting, especially when several different people are working in the same project. Managing them can be a challenge and you can quickly lose control.

There are some wonderful online project managing tools such as Asana or Trello out there that you can currently use, but I’d like to recommend one specially tailored to game development: HacknPlan.

I heard about HacknPlan last year, while I was attending a dev talk by the developer himself: Chris Estevez. He described the platform and told us why he did it. 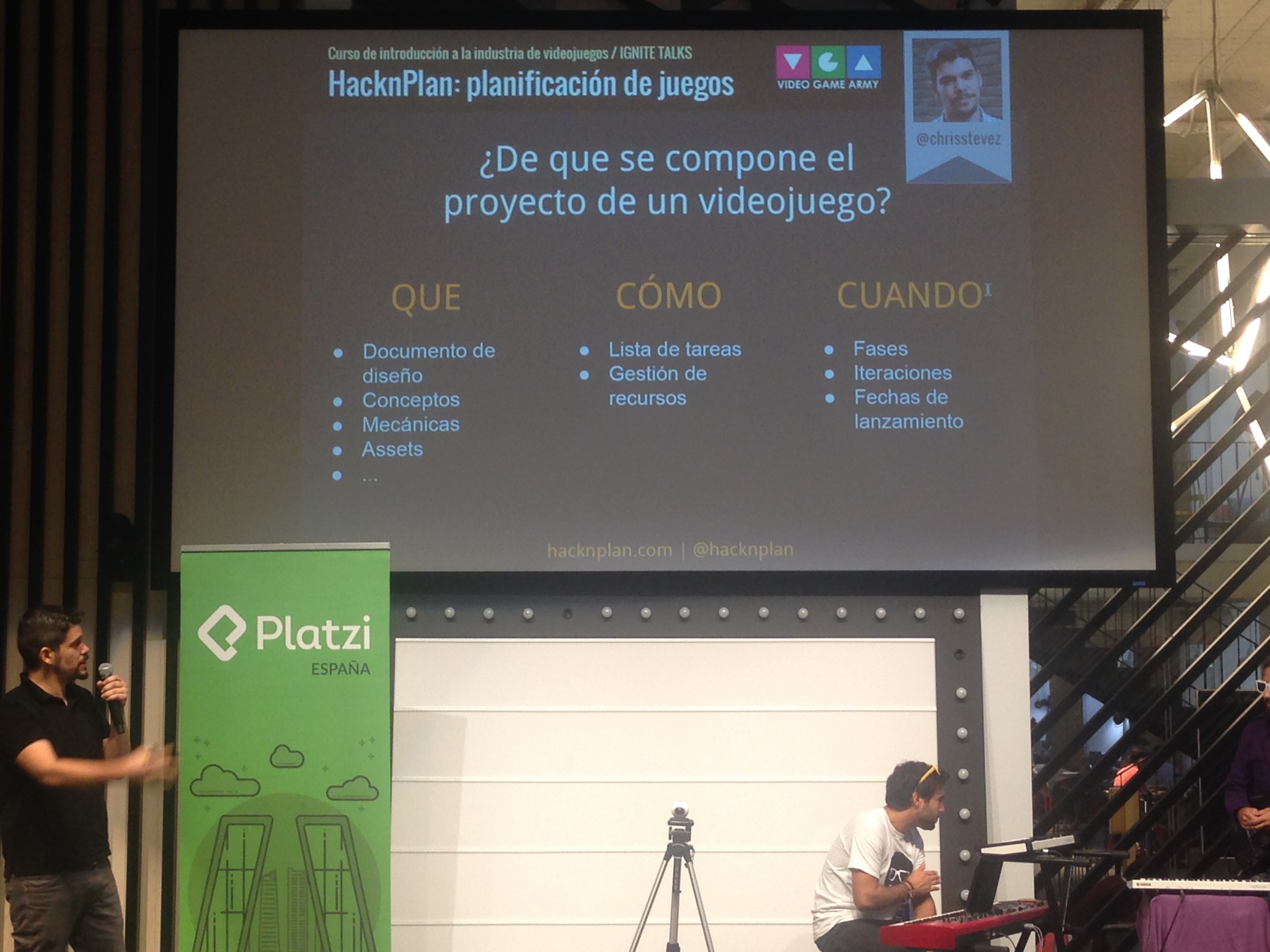 Chris explaining the differences between HacknPlan and other project management tools

He noticed that a lot of games were being developed in Madrid and that a lot of them were never finished because -amongst other things- they all had problems with bad project planning and managing and a lack of a proper team workflow. Most tools for that were fine, but there was none that would address all the complexity of a game. So he took it upon himself and created one. 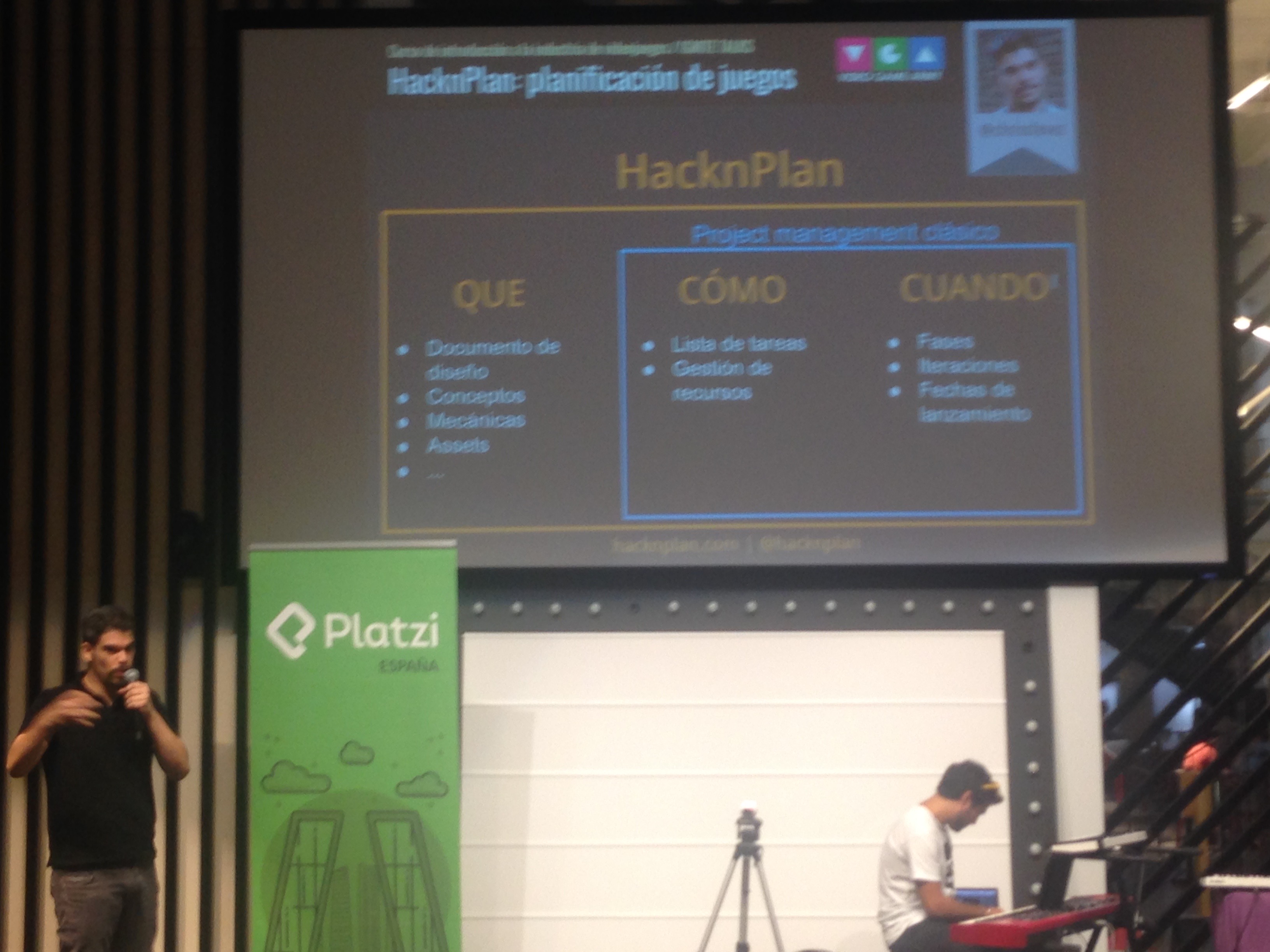 Chris explaining the differences between HacknPlan and other project management tools

He explained how a video game project development is composed:

He told us that the classic project management tools only cover 2 of these 3 steps of a game project, those being the How and the When. So, Asana can organize your game project tasks and tell you how and when to do them, but you’re leaving a very big part, the What. It may seem obvious, but in games, you should always remember and keep in sight your Game Design Document and stay as close to it as you can, in order to maintain the original vision of your project and keep it functional. You should be able to directly relate the tasks given to the specific part of the GDD they serve. This is very important specially if there are multiple people involved, and you can get how all the programming, art, music, etc. blend together. 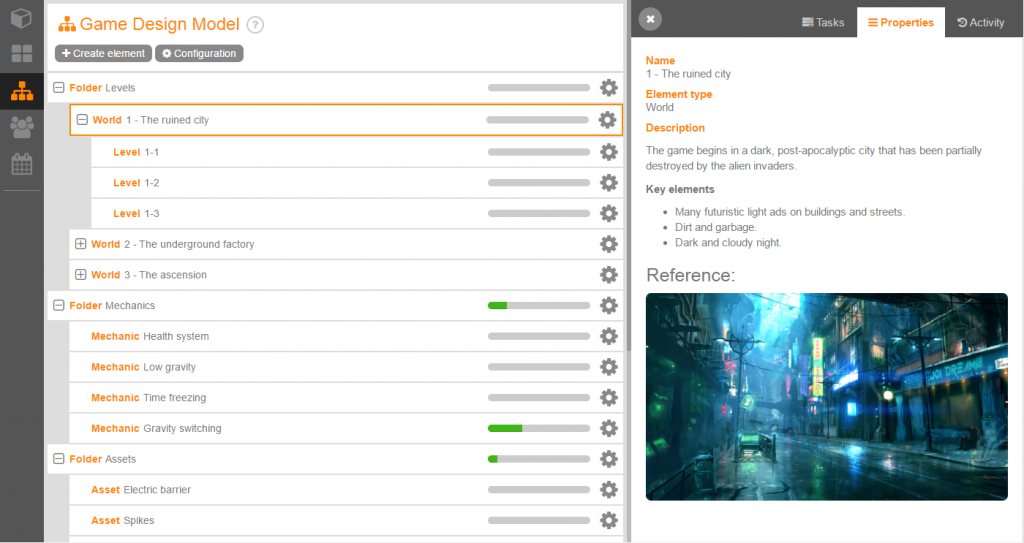 HacknPlan allows you to have a dynamic GDD

You can check out some of their features on their site.

HacknPlan gives the game designer the opportunity to make a dynamic GDD and link everything to tasks and departments. It also makes it easier to measure time, set goals, and keep a track of tasks completed. You’ll be able to see if there are any problems or roadblocks in your workflow and address them accordingly.

Other tools give you metrics of your progress too, but you cannot really get the whole thing in context, like how many tasks along in the programming or art departments, how many hours are spent in a certain milestone (like getting an alpha), and so on. 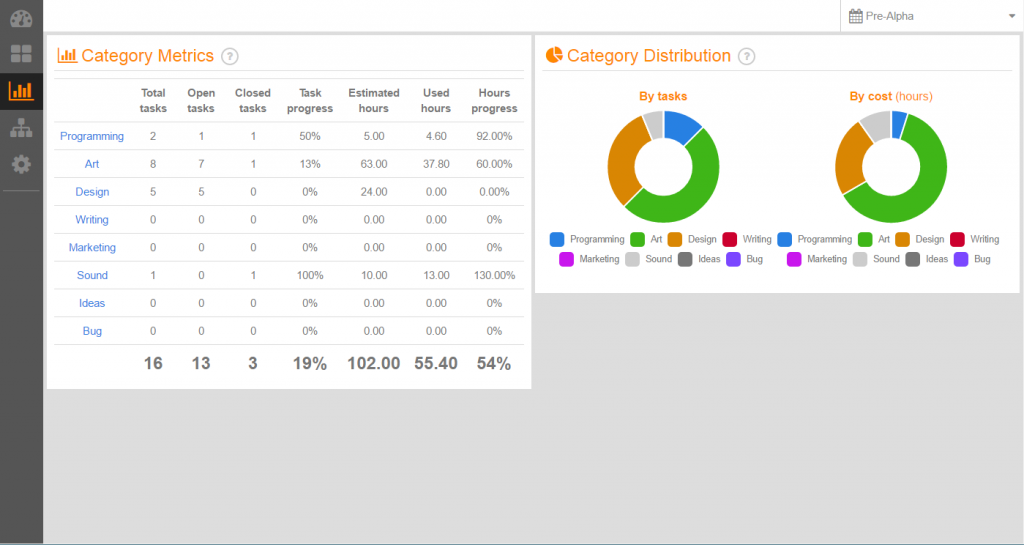 I’ve been using it for some time for the development of Twin Flames and it works really well. I would recommend it to any fellow game developer trying to get the best of all these online tools to organize, optimize and increase staff productivity. Of course if you’re already in the middle of a big project and are currently using another tool, it can be hard to migrate all the tasks (and team!) to a new one, so maybe you’ll want to wait until you’ve got another game or a smaller project to try it, but I highly recommend it and once you use it, you’ll never want to go back.

It’s definitely worth a shot, don’t you agree? Do you know of any other tools that help with managing tasks? Have you tried HacknPlan before? What’s your experience with it? Tell us all about it!!

If you like the game, please stay tuned on our social channels:

Hi guys, let’s have our second Weekly Update! What’s going on with the development of Twin Flames? Basically we have one major milestone: Get the...

So, let’s get started, in this week update, I’m going to introduce you guys to the team and what we are developing right now, and what we expect to...

The future of Twin Flames

At the end of 2016, Fat Panda Games launched a Kickstarter about a rogue like game called: Twin Flames. Let’s address the big elephant in the room...

5 Days left on our Kickstarter Campaign!

We’re very happy and excited! We’ve received a lot of support from you guys! Now there are only 12 days left for the Kickstarter! We can still reach...