TROUBLE WITH ROBOTS IS OUT NOW ON iOS!

TROUBLE WITH ROBOTS IS OUT NOW ON ANDROID!

"It is terrific to be able to play Trouble With Robots again - it is overdue for iOS. It surprised me that it still feels unlike anything else I have played, I would have expected some other game developers to use this obviously good game formula to make a bunch of exciting new games. I hope that it gets the success and attention it deserves - and inspires the new games which >I< deserve!" - Richard Garfield, Game Designer (Magic: The Gathering, King Of Tokyo)

Trouble With Robots (TWR) is an exciting new mobile game releasing for both iOS and Android. Trouble With Robots incorporates elements from both the real-time strategy and collectable card game genres, resulting in a title that emphasises both strategic deck building and quick decision making.

Trouble With Robots will likely draw comparisons from popular games like ‘Ironclad Tactics' and the original ‘Plants vs Zombies', which also adopt the similar goal of pushing waves of attacking enemies out of each stage. The beginning of each stage allows players to customize their deck using cards they've earned so far. As players grow in power, so too will their ability to summon creatures, cast spells, and execute devastating combinations!

With well over 10 hours of gameplay the Trouble With Robots tale sends players on a humorous journey through a world occupied by many creatures of great magic and frightening technology. Players will embark on a quest across all corners of the map to unite the magical creatures of the land, and under your banner they will march against the growing control of Voldetron and his robotic legion.

Victory is not the end! In Trouble With Robots, battles can be played in the three standard difficulties, each with better rewards: Easy, Medium, and Hard. Furthermore, Limited Mode is unlocked by completing the main story and cripples the player by locking half of their collected cards for each level. Every level offers tons of replay value with unique challenges, testing both your creativity and deck synergy!

IN TROUBLE WITH ROBOTS YOU WILL:

Thanks for voting and helping Trouble With Robots on it's quest to become the 2021 Indie of the Year. You are now in with a chance to score some free games. Help this game secure more votes by embedding the widget (or link) we have included below on your favorite sites.

To promote Trouble With Robots and grow its popularity (top games), use the embed code provided on your homepage, blog, forums and elsewhere you desire. Or try our widget.

The game is a tactical combat game with an emphasis on strategy. It uses a real-time combat system that can be paused to allow the player to give orders...

Raven's Path is a Tactical Action RPG for Android and IOS

Kyn is a single-player video game that mixes exciting team combat with an engrossing world worth exploring. Control up to six powerful warriors in tactical...

Version 1.0.1 now available! The three factions of the Aeon Nebula have broken out into war. The Alliance, Exiles and Cyborgs are each struggling to obtain...

Our first game is Penguemic and tug of war style battle game that spans 10 episodes where the penguin army travels around the world conquering other civilizations...

Inspired by Plants vs. Zombies, the game aims to blend two established genres into a single game. Tower defense-like gameplay that is popular in Plants... 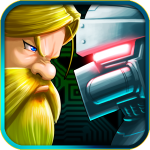