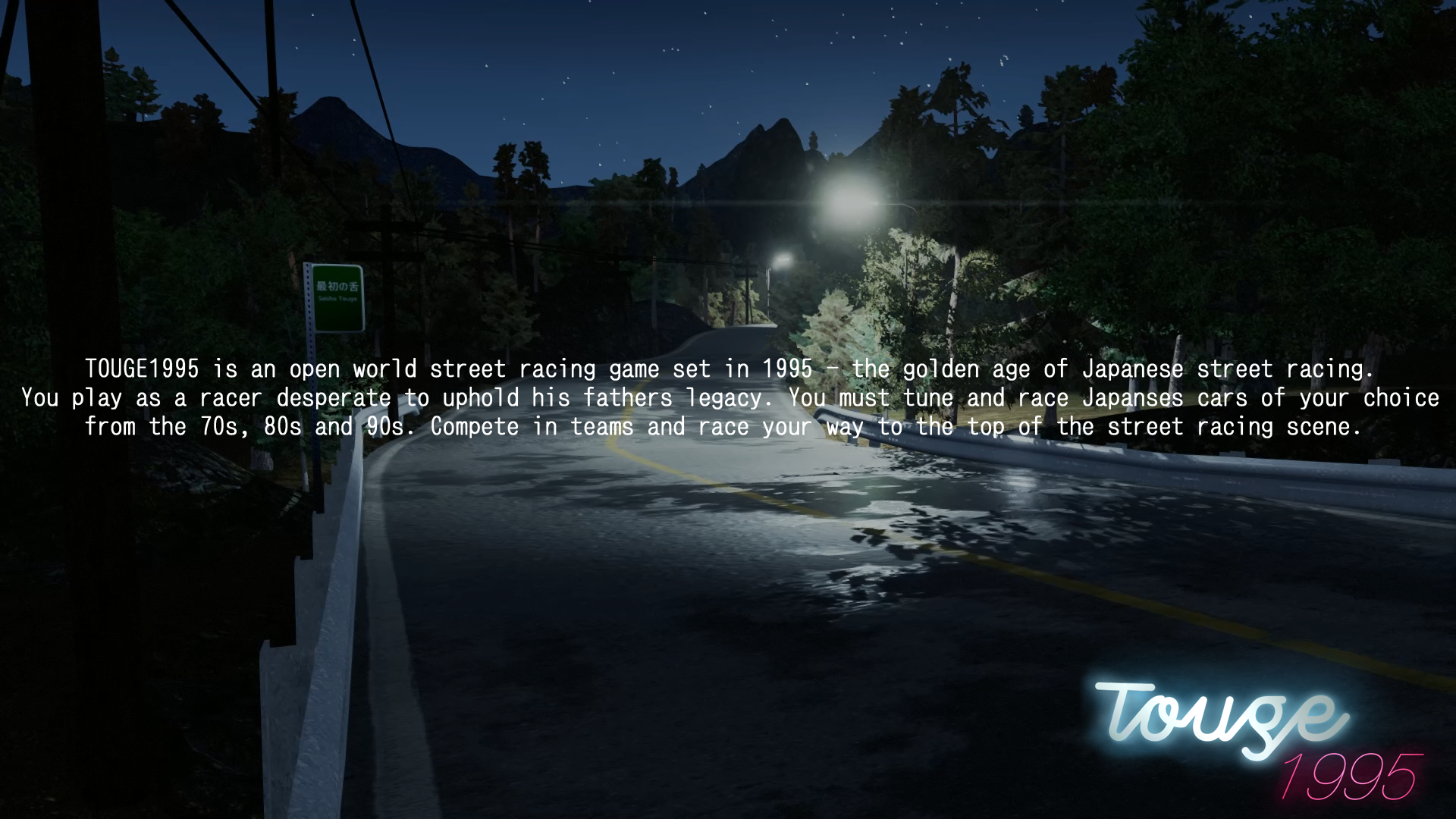 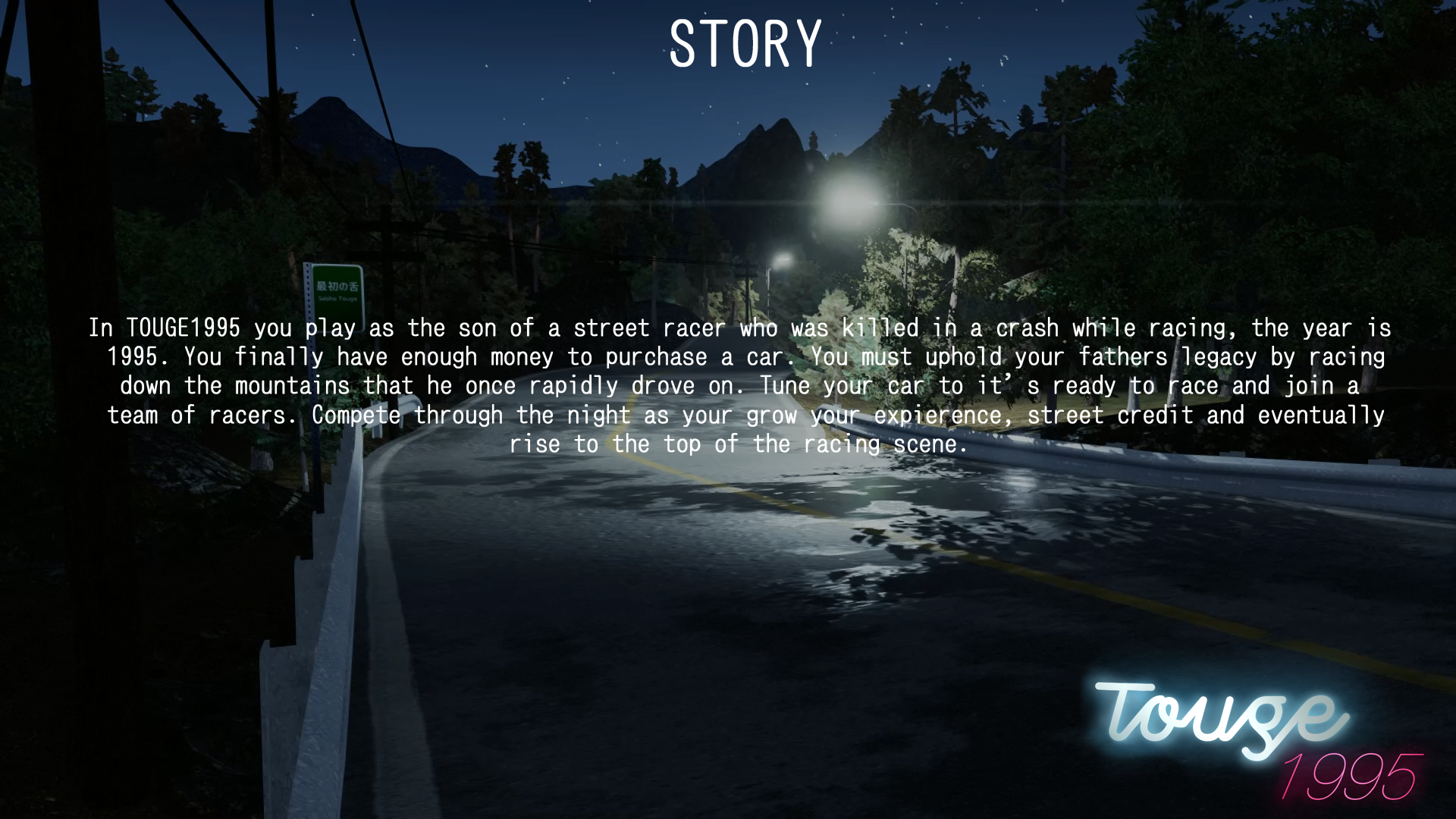 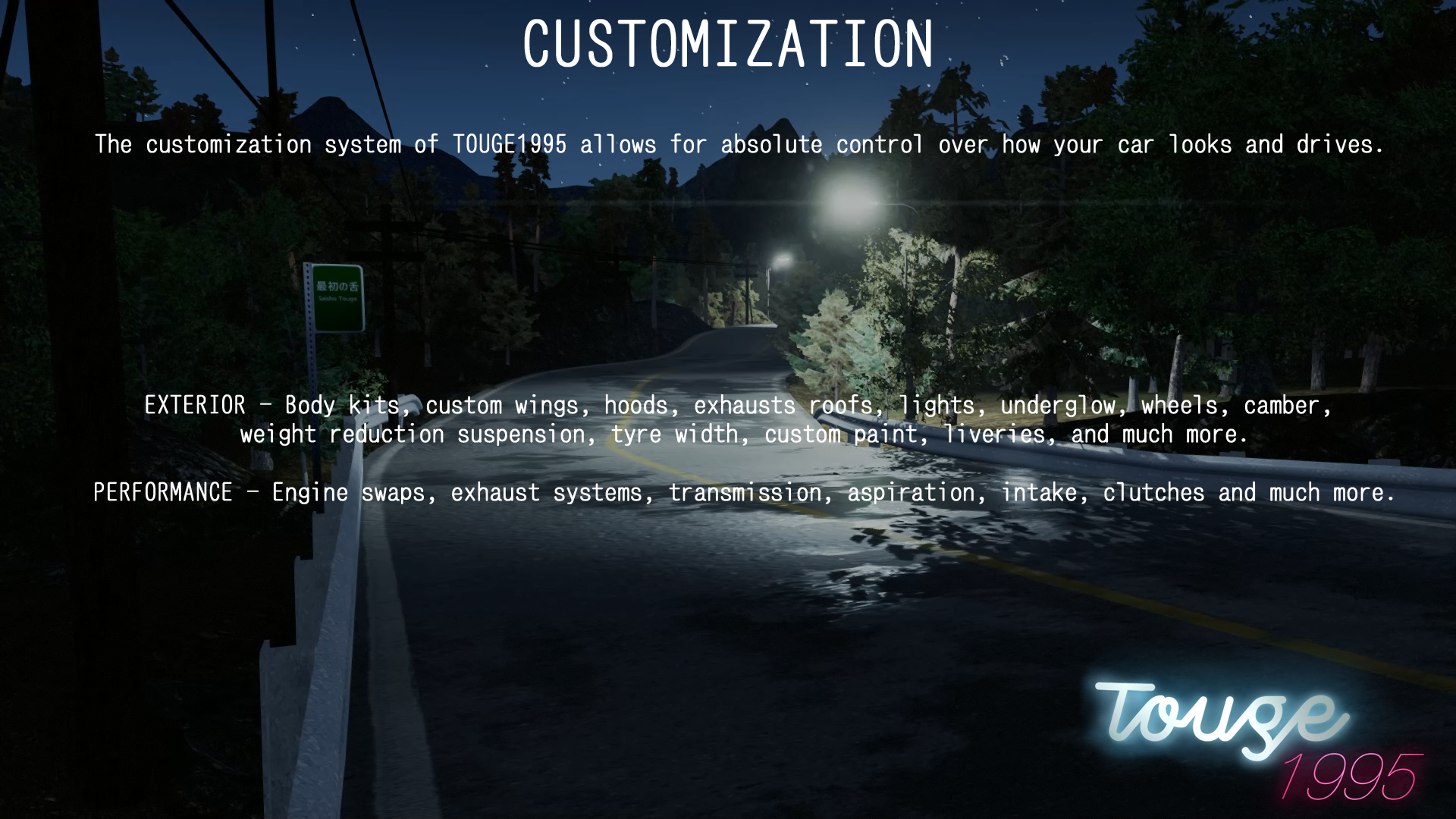 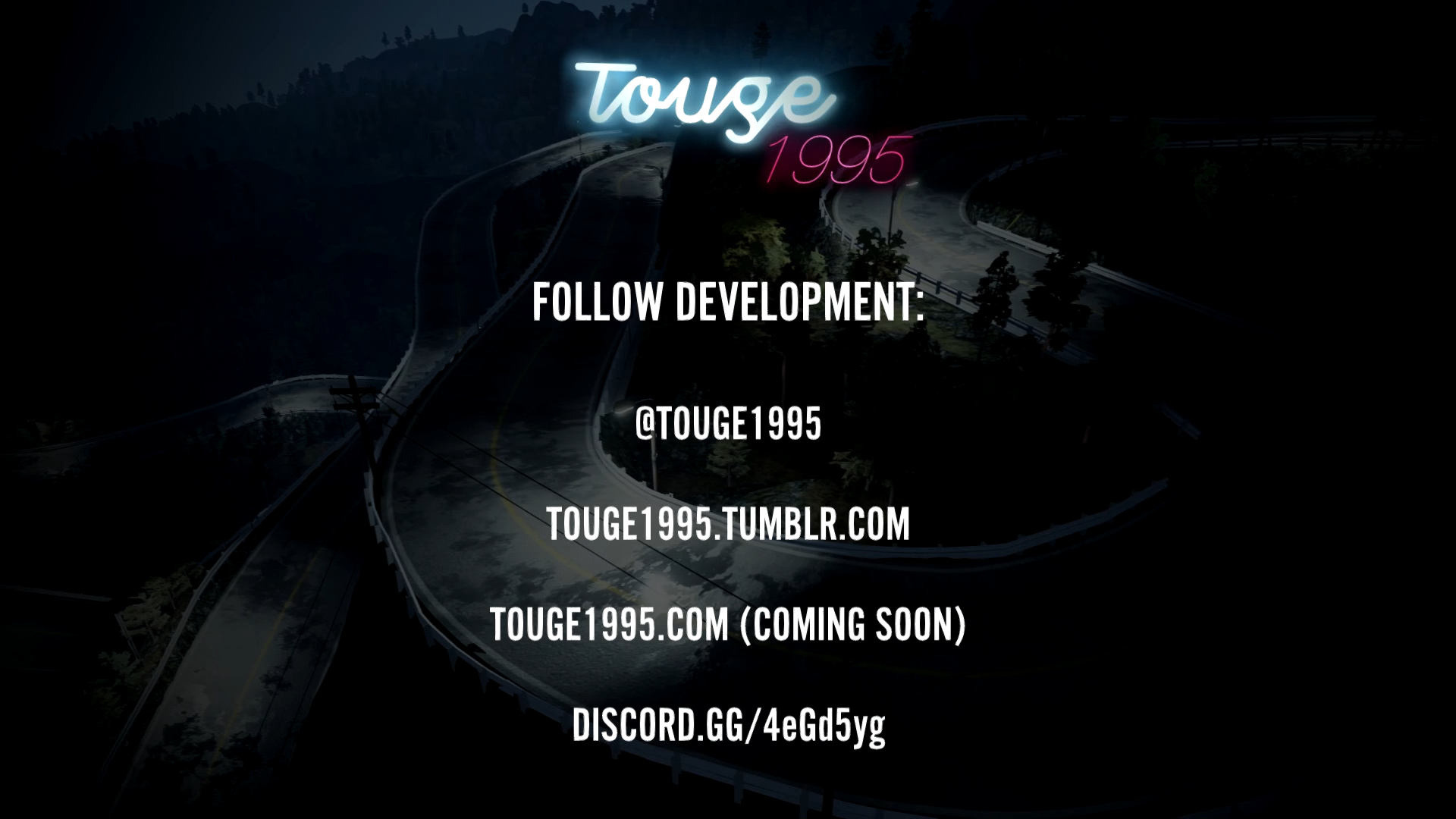 Before I begin - I have been streaming quite a lot over the last few weeks, mainly map development. I am now affiliated with Twitch meaning you can now subscribe to the channel. (twitch.tv/touge1995)

Thus far the launch has been a massive success, I thank you for your continued support. We reached the 5th position on IndieDB in terms of popularity last month!

I was interviewed by TC9700 about the game. - Youtube.com

I did an interview with AUTOMATON - Jp.automaton.am I highly recommend reading it as it gives a lot of insight into development and more.

The interview has given the game quite a bit of exposure, with the trailer reaching over 45,000 views on the trailer and much following on Twitter and our other platforms. I have created an IndieDB page for TOUGE1995 (Indiedb.com) Plenty of content is available over there, including the screenshots, videos, and articles. We have also launched a subreddit for the game at the request of some Discord users - /r/TOUGE1995 (Reddit.com) Please contribute to the subreddit by asking questions, submitting content etc. During a recent thread, I was also asked about an Instagram account so I have decided to create an account - Instagram.com (Thanks noriyaro for the follow!) 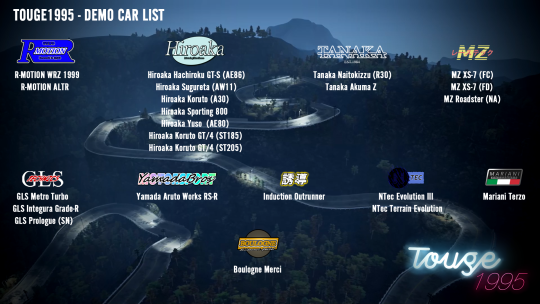 Since the last DevLog, a lot of development progress has been made. Above is the car list for the demo, which we expect to have ready for early Q2.

In the last DevLog I showed a lot of cars off while they were being models, a lot of those have since been completed. Here are a few: 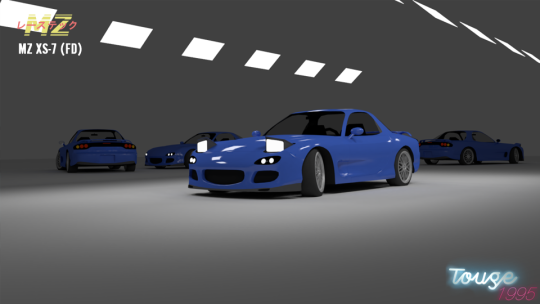 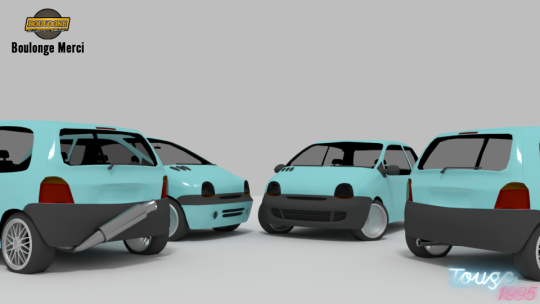 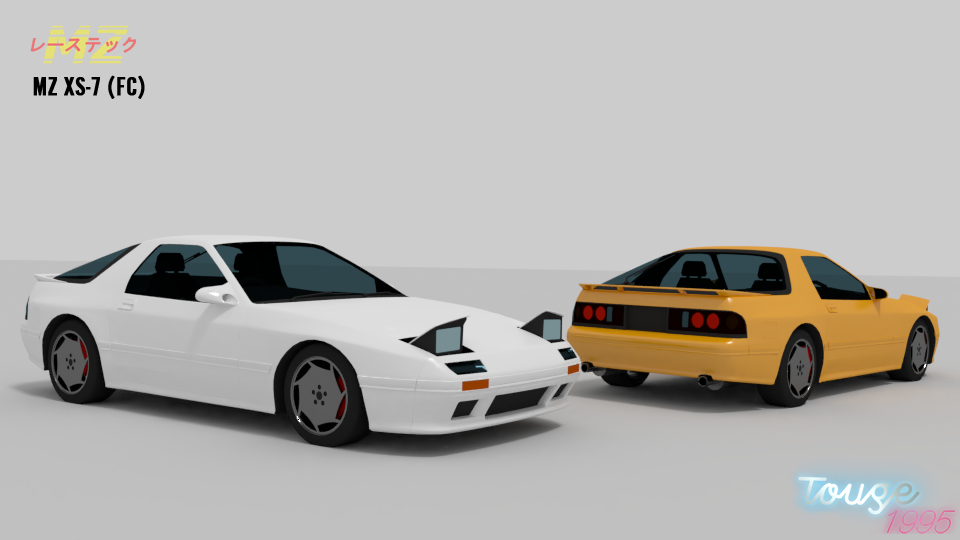 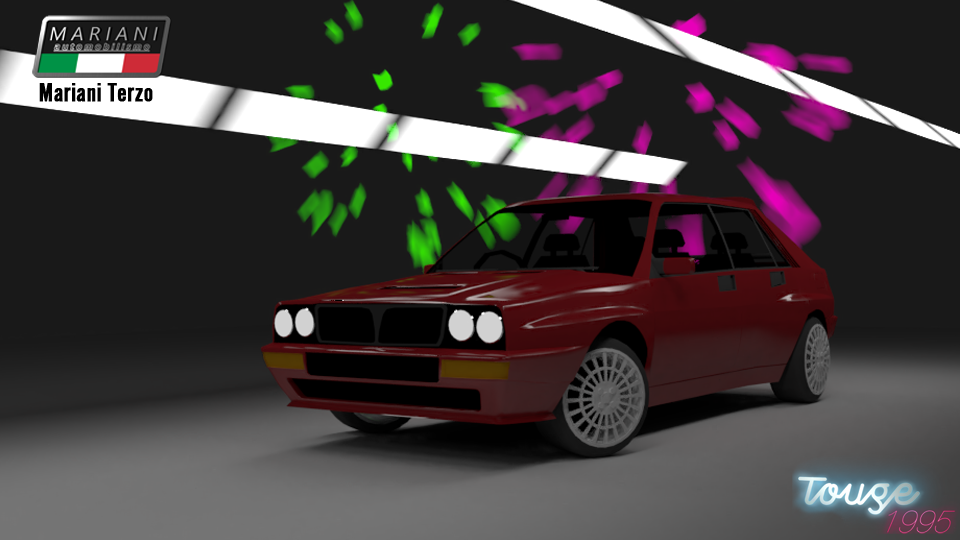 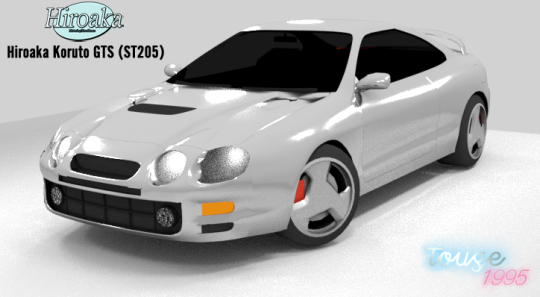 Tunari has been working on all of the car models so far, though a few more developers will be working on these models in the future. The procedure for now with cars is to get the stock, base model done and then the visual modifications for each car complete.

Customization will likely be one of the last things I work on as I must receive all the cars and their parts in order to do so. People have been submitting stickers for the game via the #sticker-general tab on Discord. Here are two of the volumes of stickers. - 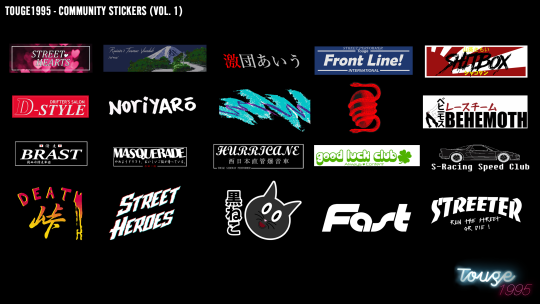 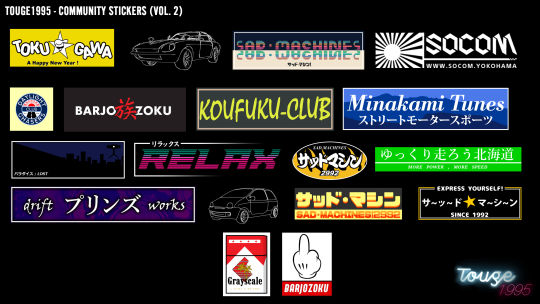 I have also been in contact with a few professional auto-related sticker makers in relation to featuring their brand as tuners within the customization features, though their brands will only be a fraction of the overall number of tuner brands we create. These partnerships will be announced once I begin the customization module of development

I have also implemented a livery system for cars, some liveries submitted will be featured in the game as obtainable items as opposed to free like stickers. If you want to make a livery for any of the cars you can do so by editing the .PNG image of the appropriate car here -Drive.google.com 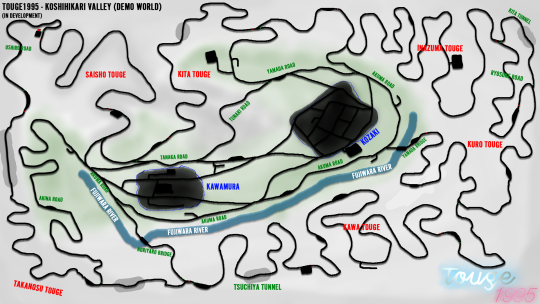 For the majority of the time between the last DevLog and this, I have been developing the map for the demo. The first thing when creating a map was to look at reference points of real-life touge sections, how the road twists and turns. I decided to surround a Japanese countryside area with mountains which would feature touge sections for the player to race on. The map features five touge sections and two town sections which will feature shops, building and petrol stations.

Littered along the map are side areas and parking areas where you will encounter fellow racers who want to challenge you. The majority of these touge races begin next to a side area or parking area.

The first thing to do was to translate the landscape from the demo into the Unity engine. At times it was difficult to accurately reflect the scale of the 2d map, I used reference points on the map to know exactly where to place hills, mountains etc.

The next step was to develop the road network similar to that of the map which I had drawn. Again, the issue encountered here was the scale, and the solution one again was to use reference points. The elevation was the largest issue we had while testing the cars on the original roads, it was an area of focus for me while developing the new roads. 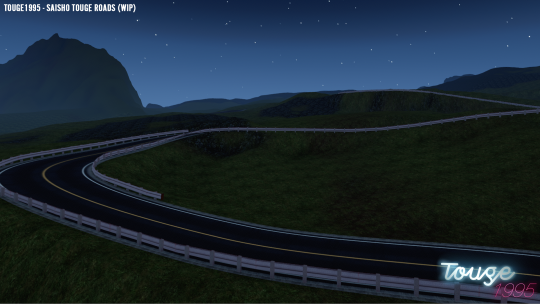 For the demo each touge is unique for example Saisho Touge, shown above in development features new roads, barriers, signs, road markings etc. Each touge has its own style - some are worn ancient roads will little barriers, testing the players’ skill while others are new features. At the current stage, I am implementing the barriers, then signs, road markings. While I am working on this our graphics engineer, Kolyasisan will be working on foliage and graphical optimization. During this time our environmental 3D artist, Haddedam will be working on buildings etc.

I have released two videos on the map development, you can check them our here- 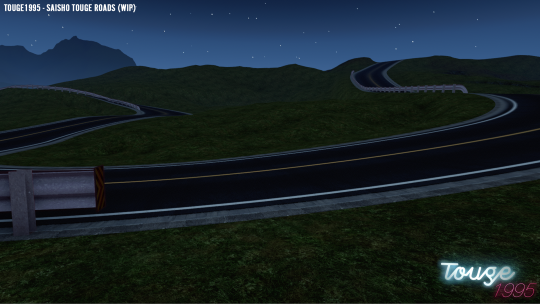 The next step from here is working on the programming of the game its self. How races work, petrol stations, how shops in-game work and much more. I have split the development roadmap for the demo into different modules - World, Story, Physics, Customization, Menus & Car Selection, Radio, XP System & Money system, AI and Bug Fixing/Testing

Gooose, our GFX designer has been working on a very unique UI concept, I will be previewing it on stream tomorrow.

That’s it for this DevLog. Thank you for all the recent support, I look forward to developing the map and the general game over the next while. Don’t forget the stream tomorrow!

(Note - this article is an amalgamation of the latest two DevLogs on touge1995.tumblr.com)

Race during the golden age of Japanese street racing through the dark streets of Japans hills and mountain passes to glory, tune your JDM car to its maximum...

Is the project abandoned or still there is work in progres?

hey peeps, does anyone know where I can get this game?

Yeah, in your dreams.

ive been waiting for something like this for years. thankyou so much for bringing this idea to life. cant wait for the demo