Tome Travellers is a 4 player local co-op game with an emphasis on physics fun. Using crazy physics based arms with stick control and randomised weapons players will take on the role of the travellers, questing through RPG books to rescue princesses, slay monsters, and kick chickens. The game is tailored to how you want to play, and your skills will adjust your characters accordingly. Want to be a sneaky assassin? Try using double blades. Fancy casting powerful spells and having a sweet beard? Don your mage robes friends! The powerful in game physics allow for wacky events to randomly occur meaning no play through will be the same.

Tome Travellers allows players to create a hero from scratch that they will use to travel through wondrous worlds of the books. These heroes can evolve and change as they progress, allowing you to truly have your own unique character. The classes follow a basic system for each possible combination. These are as follows: 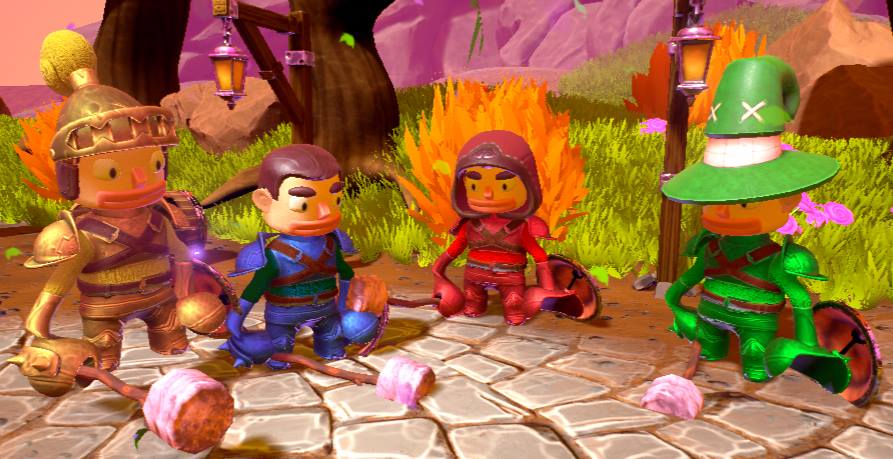 The mage is a master of all things mystical, whether summoning a tech storm to defeat foes, or accidently turning fellow travellers into sheep, the mage is always ready to help the party with their knowledge of the arcane. The mage class can be achieved by using spell tomes and staffs to level up their knowledge and experience with the arcane arts. Players delving down the path of the mage will start to grow long grey beards as they become wiser within the game.

Fighters are brave and strong contenders who can rely on their trusty swords and baseball bats to get the job done. Not afraid of any fight, the warriors will swing first and ask questions later, sometimes leading to awkward circumstances. Fighter classes can be achieved by using close combat single handed weapons such as katanas or axes to fight foes, this means that players can get up close to each enemy and look them in the eyes. Players who choose the Fighter's path will begin to see their character become bigger and bulkier, eventually becoming much larger and stronger than other companions.

The rangers are swift and agile characters that use ranged weapons such as bows or guns, they can see the fight from a distance and pick off enemies one by one to swing the battle in their favour. The way to achieve a ranger style class is to train your character in ranged weapons such as throwing knives or shurikens to attack from a distance. Players walking down the path of a ranger will see their character become quicker and their body will grow slender as they progress.

Rogues use the shadows to their advantage as well as the confusion of battle in their favour. They attack when it is least expected and disappear without a trace. Rogues prefer to use knives and daggers to get up close and personal, to this effect players who use dual daggers will upgrade into a rogue style character. As players do this they will don the hood of a rogue and conceal their faces, in order to be seen less, they will also become smaller and slender in stature, allowing them to blend into the shadows and critically strike, or miss, as the case may be. 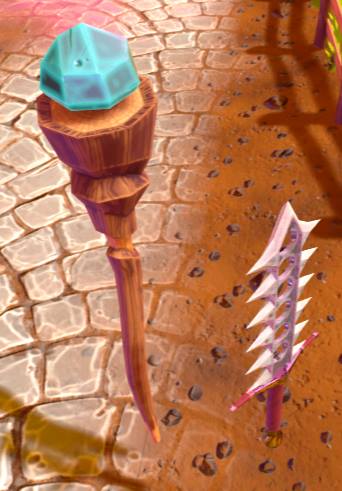 A mage's staff next to a fighter's sword. Some of the many types of weapons on offer for players.

Players will be able to change classes as they see fit but will require to train in that class in order to be proficient. If a player wanted to change from a rogue to a mage all they have to do is start casting spells from spell books, however they may not be as well versed in the arcane as some and could cause some issues. Allowing players to change classes as they play really feeds into the idea of becoming the hero you want to be, as we do not lock any opportunities away, the party could always use another mage.

The classes will subtly changed based on the book in question, as players travel through the book of sci-fi, they will acquire weapons and spells from those books, such as a laser sword and the ability to call forth a tech storm. These upgrades can then be used in any book once acquired meaning more added madness in the books later on down the line, and more physics based craziness.

Stay tuned for more features and news from Tome Travellers!

An introduction to Tome Travellers

This is an Introduction to the game Tome Travellers, including all the necessary information for the prototype build.