In case you haven't already noticed, today I'd like to make an official announcement that the Steam version of TinyKeep is now available for all three desktop platforms (PC Windows, MacOSX and Linux). 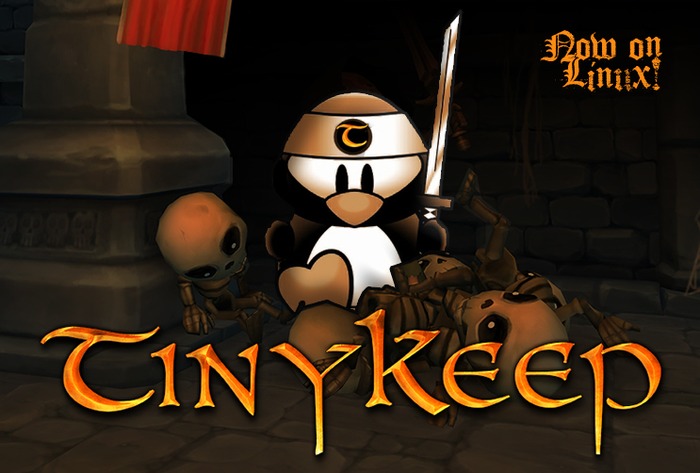 Of course with it being a Unity game, porting to other platforms is a lot easier than it used to be. However it still isn't a one-click solution. Over the past month we ran into all sorts of issues from consistent game controller support, resolution issues, installation dependencies to compatibility problems with the latest Yosemite MacOSX update. Thus I'd like to thank everyone who offered to help test the game on a range of setups, without which it would have been very difficult to co-ordinate the release in time.

I've promised Google and Nvidia that I'll do one final port (for the time being at least) to their Android tablet devices and then after that I'll be free to finish off some Kickstarter reward stuff. And then I will perhaps start exploring other avenues to get TinyKeep onto other more consumer based platforms. *cough* consoles *cough*

Version 1.2 is here, adding some much needed and heavily requested features as well as a load of bug fixes and gameplay tweaks.

TinyKeep is now available to buy on Steam, and we have a full length extended trailer!

So my composer Will Bedford dropped this into my inbox this morning, a fully mastered version of the soundtrack!

This looks absolutely wonderful, I better get a copy of TinyKeep this weekend. Is it possible to find out what artists you had on board making this game? I recently moved to the UK to persue a full time career in games, so I'm very curious to see what game devs in the UK are creating and see what direction the industry is heading in the UK.

Hey there, you may recognize a few of the assets from a company called BitGem, we ended up getting Bitgem's Matthias Andre (who's from Germany) to help us out with TinyKeep. The main player character was modelled and rigged by Zane Devon. Hope that helps! Whereabouts in the UK did you move to? We're based on North in Manchester :)

Is there a demo available?

Not at the moment, but I'll consider adding one in the future :)

This looks super fun, if you'd like; we could review your game for you. Just message us on here or visit our website and submit your game there if you're interested.

Paid, but no love. Helps!