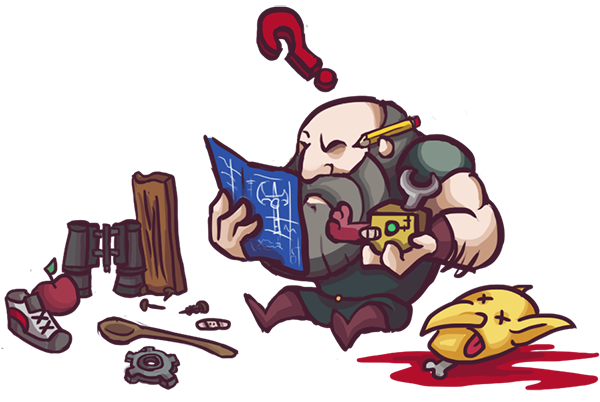 So, what's this all about?

Tiny Little Bastards is a game about the love of a man for his beer.

You’ll play as Ivarr, a viking tavern owner who had his tavern mysteriously sacked by a horde of annoying little creatures, the Goblins. Ivarr now has to take up arms to recover his stolen goods and save a desperate world from the severe beer drought the Goblins are causing.

Through exploration, resolution of quests and dialogue options, player’s choices will have meaningful impact on the world - from little brother and sister fights to nation-wide conflicts such as civil wars and more!

Tiny Little Bastards is a 2D platformer Action RPG for PC (windows, Mac & Linux). Its character progression is similar to action RPGs such as Diablo and Torchlight while the level design is deeply inspired by all-time classics like Castlevania.

This means the player will be able to control character stats, talents and talent-based abilities while progressing in a vast and beautiful platform world with many bizarre, sometimes otherworldly regions, ranging from huge pumpkin dungeons to lands where sheep float in the sky!

The player will also be able to collect many different items such as weapons, trinkets, crafting materials, potions… and manage his own inventory. Items will be in ARPG-inspired style, appearing through the game by means of looting, crafting and exploration, as well as sold by charismatic vendors, and posessing a variety of randomized stats to allow for different playstyles.

You’ll find a diverse cast of crafters with compelling backstories and quests along the way and, if they like you, they’ll follow you around the world making your journey more interesting!

Through the journey, the player will have to overcome obstacles and puzzles based on the levels themselves. An infinity of dreadful traps and deadly pits are there to test your abilities, but you can beat them with the right moves and choices… if you’re skilled enough.

The combat is simple and yet very detailed. A wide variety of enemies will try to block the way as the game goes on.

The actual combat involves both player skill and stats:

A combination of good timing, knowledge of enemy patterns, resource management and smart character building are what makes the combat in Tiny Little Bastards a fun experience!

To promote Tiny Little Bastards and grow its popularity (top games), use the embed code provided on your homepage, blog, forums and elsewhere you desire. Or try our widget.

Dragon Skies VR is a story-based RPG/shooter that puts you right in the saddle as your kingdom's sole dragon rider. Mount up and fly your dragon through...

A sensual dark fantasy ARPG. Customize a stunning succubus with great body details, together with your companions fight intense combats with challenging...

Looterkings is a procedural dungeon crawler, in which you won't fight alone and you won't be the good guy. Play together with up to 3 friends and take...